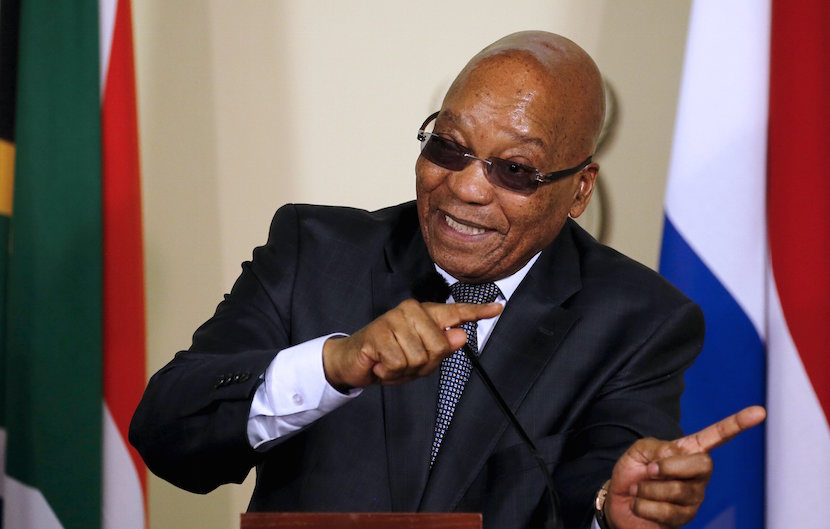 South African President Jacob Zuma will need all his legendary bounce-back-ability to overcome current career limiting threats. Apart from a Finance Minister who is determined to expose crony corruption to an expectant nation, Zuma is also being tackled in two court actions, either of which could result in his impeachment. The first of these was heard in the Constitutional Court where a judgement is awaited on whether Zuma broke an oath of office by using R250m worth of taxpayer money for “security upgrades” at his Nkandla homestead. The second relates to dropping of corruption charges against Zuma by the National Prosecuting Authority. That case began yesterday. – Alec Hogg

Pretoria – The High Court in Pretoria will on Wednesday continue to hear arguments in an application brought by the DA to have the decision to drop corruption charges against President Jacob Zuma reviewed.

Lawyers for the opposition party asked the court to look at the rationale behind the decision to drop the charges in 2009.

Advocate Sean Rosenberg spent some time going over the history of the case, indicating it was important to give context to the matter.

He argued that then National Director of Public Prosecutions Mokotedi Mpshe had failed to attach proper weight to the matter when he announced that the charges would be dropped.

Rosenberg also argued that the decision was an impulsive one.

Nicholson’s decision was taken to the Supreme Court of Appeal, and overturned. Zuma subsequently appealed this to the Constitutional Court, setting in motion a direct approach to the NPA to make written and oral representations on why the case should be dropped.

Explaining the NPA’s decision to drop the charges, Mpshe on April 6, 2009, cited what became known as the “spy tapes”.

They are recordings of telephone conversations between then Scorpions boss Leonard McCarthy and former NPA head Bulelani Ngcuka, and apparently show political interference in the decision to charge Zuma.

On April 7, 2009, the charges against Zuma were withdrawn in the High Court in Durban.

Zuma was sworn in for his first term as president in May that year, following general elections.

Lawyers for the NPA on Tuesday argued that former president Thabo Mbeki had nothing to do with the plot to have Zuma prosecuted.

This after being asked by Mothle about the allegations of political interference levelled against Mbeki, McCarthy and former NPA head Bulelani Ngcuka in the prosecution. – News24