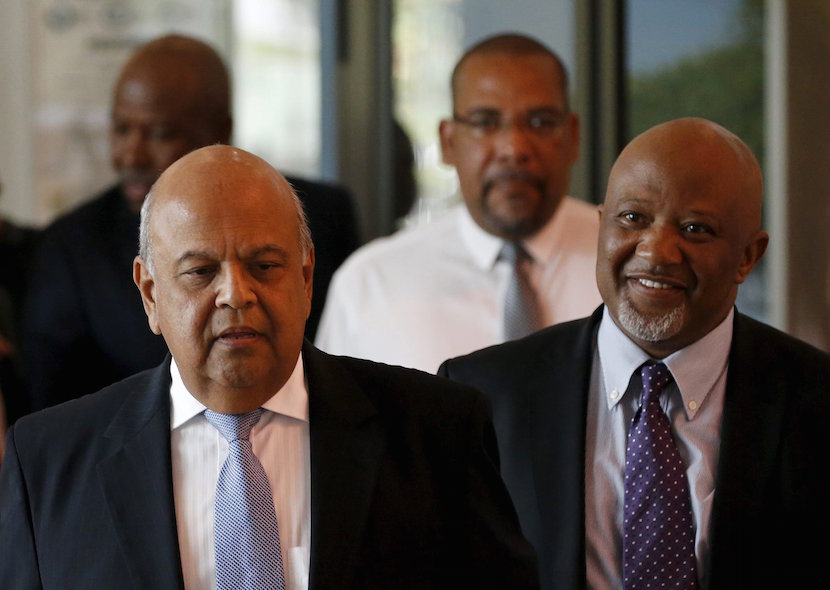 RW Johnson wouldn’t have been surprised to read this morning’s Business Day which reported Mcebisi Jonas received a death threat before going public with yesterday’s bombshell. Neither would those who read Johnson’s masterpiece “How Long Will SA Survive” where he unpacks in great detail the scale and reach of President Jacob Zuma’s network of patronage. People have been bumped off for far less than the billions at stake here. The threat to Jonas’s very existence would have only been part of the Deputy Finance Minister’s internal deliberation process. He is witnessing first hand a concerted attack by the top police investigative unit on his boss. Seeing the powerful pull State levers to cover up the truth. It is instructive that yesterday the Helen Suzman Foundation launched an urgent application to interdict Pravin Gordhan’s attacker in chief “from exercising any power or discharging any function or duty as the head of the Hawks.” The Foundation, created to promote democracy in SA, explains that “Lieutenant General Ntlemeza was appointed to the highest office within the Republic’s corruption and crime fighting unit, the Hawks, despite damning judicial findings impugning his integrity, honesty and fitness and propriety to hold such office.” So now I get it. And it also explains why the official Gupta response to Jonas’s statement includes this threat: “Minister Jonas is attempting to cover up and divert attention away from his own relationships and practices. We are confident questions about his own ethical standards will be exposed.” The future of a young democracy is on the line. But those who side with Jonas, Gordhan, Nhlanhla Nene, Vytjie Mentor and, indeed, the spirit of Nelson Mandela just know South Africa will emerge from this challenge stronger and better prepared to withstand the Guptas of tomorrow. Hope springs. – Alec Hogg

As he was preparing his bombshell statement, Mcebisi Jonas received a text message from a “prominent businessman” telling him to be quiet, the paper – South Africa’s main business daily – said.

“Please keep your own counsel. Martyrdom is best left to Christ,” the text message read. The paper did not identify the sender.

The report is the latest twist in a saga that has rocked the government of Africa’s most advanced economy, amid suggestions the Gupta family, whose business empire stretches from media to mining, have had a hand in top political decisions.

That may even have stretched to Zuma’s decision to sack respected finance minister Nhlanhla Nene in December, a move that sent financial markets and the rand into a tail-spin.

In his Wednesday statement, Jonas said the Guptas had offered him Nene’s job but he rejected it “out of hand” on the grounds that it made a mockery of South Africa’s 22-year-old democracy.

Zuma is due to answer questions in parliament on Thursday, and the ruling African National Congress (ANC) is holding a scheduled meeting of its top brass this weekend at which the scandal will be discussed.

The opposition have called for Zuma’s resignation, saying the entire cabinet is compromised, and its main spokesman, Zizi Kodwa, said the party had to “send a clear message, unequivocally” that it could not be unduly influenced.

However, Secretary General Gwede Mantashe said it would not be making any hasty decisions.

“Let’s leave that to the processes of the ANC,” he told 702 Talk Radio.

The Guptas, who sit on the boards of at least six companies with Zuma’s son, Duduzane, denied making job offers to anyone in government.