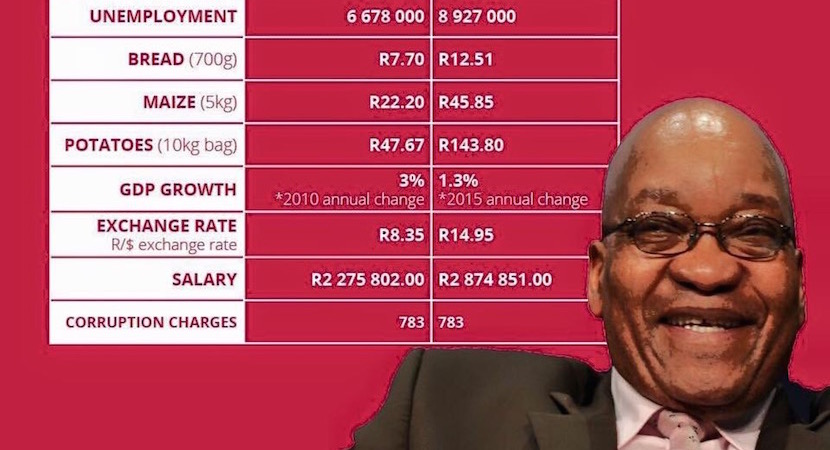 Twelve Apostles head Caesar Nongqunga was last in the news a year back after his church (and himself) were taken for R7m by alleged fraudsters. He also has an interesting official CV. It provides details of his primary and high schools then adds, without naming any institutions and almost as an afterthought, that he also holds a Professorship in Theology, a civil engineering degree and an MBA. That makes him one of the best qualified church leaders on earth. Nonqunga also has a big fan in SA President Jacob Zuma who shared a stadium’s stage with him in Durban yesterday where they asked God to deliver peace, rain and successful local elections. All of which is strange enough. But even stranger was yesterday’s claim by the Twelve Apostles church head that Zuma has already been “anointed” by God for a third term. Dangerous talk indeed in these times of turbulence. Especially for a man of the cloth. He should know better than publicly flying unconstitutional kites to benefit someone with such a warped sense of reality he may well interpret it as a sign from above. – Alec Hogg

Durban – Your anointing has secured you a third term, a religious leader told President Jacob Zuma during National Prayer Day celebrations held in Durban on Sunday.

Professor Caesar Nongqunga prayed for the president at the Kings Park Stadium where he told Zuma God knew his life before he was even born.

“[Zuma’s critics] They were there before you were president, they are still here but God’s work will move and the purpose that God anointed you for will also be fulfilled and whether a man likes it or not, it will be.

“This is not the end. You were appointed for this job and it is yours, with the final word that God anointed you for.”

Nongqunga told Zuma God and his forefathers loved him. “They are smiling down on you. We are here for you. The elections are at hand and we are going to vote and the people will speak,” he said.

Before Nongqunga took the podium, Zuma addressed the nation. He asked South Africans to pray for peace.

In a veiled attack aimed at the Economic Freedom Fighters (EFF), Zuma condemned parties he said were trying to destabilise the country through “hooliganism and thuggery”.

“We must not tolerate any party which seeks to take us back to apartheid to advance their own political agendas… Let us turn a blind eye to those who promote violence,” he said.

Zuma said when the ruling party was voted into power in 1994, it committed itself to working for peace and unity.

“The ANC has been in power for 22 years. We ask that all communities pray that peace is not destabilised in our country.”

He condemned the violence in Parliament saying it used to be the most respected house in the country where laws were made but this was not the case today.

While the event was a government initiative, many of the people were wearing ANC T-shirts and opposition parties were visibly absent. ANC songs were also played with ANC members singing along.

Some people moved from the right side of the 32 000-seater stadium and sat where they could find shaded areas.

An official at the stadium told News24 that while the stadium was not full, more than 20 000 people had attended the event. – News24