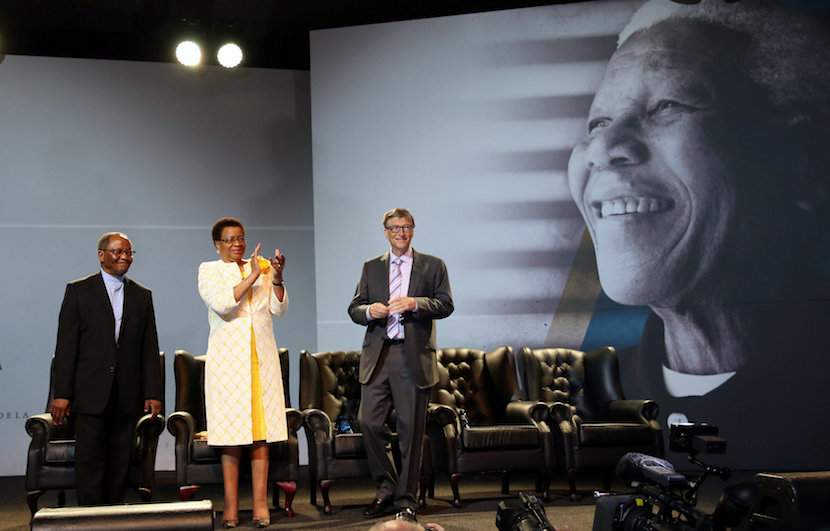 The richest man on earth, self-made billionaire Bill Gates, is a valuable friend to South Africa. Not just because of his own philanthropic efforts, but also those of his bosom buddy, fellow multi-billionaire Warren Buffett, who has also pledged the bulk of his wealth to the Bill & Melinda Gates Foundation. In a historic speech at the University of Pretoria last night, the first of its kind he has made in the country, Gates provided insight into how he developed this special bond. And reminded all of the huge legacy SA inherited from national icon Nelson Mandela. In the pettiness of everyday existence, it is easy to forget Mandela’s timeless ideals of nation building achieved through open-mindedness, humility, selflessness and reconciliation. Gates delivered a timely reminder. It is not only the Microsoft founder’s generosity for which the country should be grateful. – Alec Hogg

Pretoria – Microsoft founder and billionaire philanthropist Bill Gates said that obstacles in the path of Africa’s youth needed to be cleared so that they can drive the future of the continent.

Gates was delivering the Nelson Mandela memorial lecture at the University of Pretoria on Sunday night.

The theme of the lecture was “living together”.

Gates said that the elder statesman’s life embodied the theme of living together.

“Today South Africans are still striving to live together in the fullest sense, so much closer because Nelson Mandela and many others believed in the promise of one South Africa,” he said.

“As a boy I learned about him [Mandela] in school. The first time I got to speak to him in 1994 when he called me to help fund SA’s election. I admired him so much and I knew the election was historic so I did what I could to help.”

“A good education is the best lever we have for giving every young person a chance to make the most of their lives.” – @BillGates #NMAL2016

He said on a subsequent trip to Johannesburg, specifically to Soweto, and prompted the founding of the Bill and Melinda Gates foundation.

“Melinda and I had always known that we would give our wealth to philanthropy eventually. The sense of urgency was spurred on by a trip in 1997 when I came to Johannesburg. I spent most of the time in business meetings in the richer part of the city but I also went to Soweto. My visit taught me how much I had to learn outside the world outside the bubble I lived in all my life,” he said.

Gates added that Nelson Mandela was concerned about the future and he believed that people could make it better than the past.

"Change can only happen where we have good governments to implement it. Fiscal accountability…" – @BillGates #NMAL2016

“One topic with Nelson Mandela came back to was the power of the youth…that is one reason why I am optimistic about the future of this continent. The youth are special source of dynamism,” he said.

“We must clear the obstacles for young people…if we invest in the right things and ensure that the basic needs of Africa’s young people are taken care of, they will have the ability to change the future,” he said.

“Let us do everything within our power to help build a future Nelson Mandela dreamed of and a future we can achieve together,” Gates added.