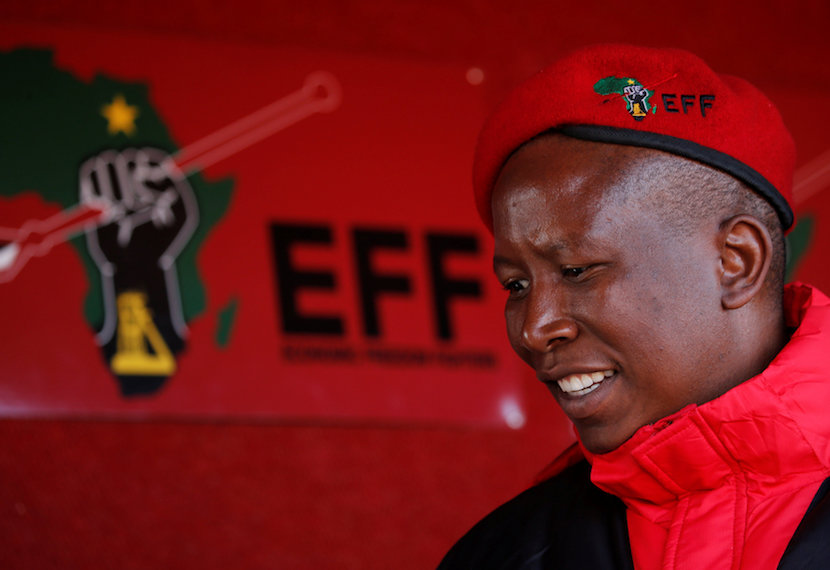 The three year old Economic Freedom Fighters is poised to receive an early opportunity to show whether it possesses the ability to actually govern. On the day after leader Julius Malema held discussions with his former ANC compatriots, news is emerging that the party’s other suitor, the Democratic Alliance, has offered the EFF mayorship of Tshwane in return for its support to take over in Johannesburg. That deal, if concluded, would lead to the extraordinary situation where the EFF gets to control the South African capital city even though it was supported by just 11.7% of the voters and did not win a single one of the 105 wards. As horse-trading between the three major political parties continues, the EFF is enjoying a position of disproportionate power. While Malema’s organisation isn’t yet ruling out any alliance, the DA is steadfast in its refusal to strike any deal with the ANC. – Alec Hogg

The UDM, EFF, Cope and the UF – four of the most likely kingmakers in three of the biggest hung metros – also made public their combined “shopping list” of demands, which includes the resignation of President Jacob Zuma, the immediate suspension of the envisaged nuclear power acquisition, the “finalisation” of the re-naming of Pretoria, an overhaul of the mayoral system and a streamlining of national Cabinet.

The publication of the list suggests more extensive and inclusive coalition negotiations could be on the cards from Wednesday onwards.

Horse-trading between parties is set to enter a fourth day after final results were declared on Saturday and revealed 27 hung councils.

According to two sources close to the ANC, negotiations for the two most contentious of these – Johannesburg and Tshwane – were in full swing on Tuesday.

DA chair of the federal council James Selfe is said to have tabled an offer to the EFF which would involve the DA getting control of Johannesburg with the EFF’s support, and Tshwane going to the Fighters.

There has been talk of EFF spokesperson Mbuyiseni Ndlozi becoming Tshwane mayor, but he is an MP and would have to be registered on the Tshwane lists.

The people voted for and therefore WANT
1.A coalition government; or
2.A rerun of the elections
https://t.co/hqGCvjlSUF

Ndlozi on Tuesday, however, denied that any deal was on the cards.

“A deal has not been struck,” he said.

Another source in the ANC confirmed the DA offer, but said the ANC’s Gauteng chairperson Paul Mashatile countered it by throwing the position of MEC for social development into the deal for the EFF.

DA leader Mmusi Maimane at a “thank you” rally at Pretoria’s Freedom Park on Tuesday morning confirmed that the party would not go into a coalition with the ANC due to its “divisive” racial politics and perceptions of not dealing with corruption efficiently.

Another source in the DA, however, said the party would not try to be in government at all costs.

“We have turned the corner in Gauteng and that’s important,” he said, referring to the fact that the ANC’s support in the province has dropped to under 50% for the first time.

He also said the negotiations were a lot bigger than just the Gauteng metros, and took opposition co-operation in all the hung councils into account.

The party does, however, seem to have a measure of confidence of holding a strong position in Tshwane, as it felt confident enough to hold a rally on Tuesday in the metro celebrating the fact that it had the most votes.

DA sources said the party’s federal executive council was due to meet on Tuesday night to approve possible deals, but chairperson James Selfe could not be reached for comment and did not respond to a text message.

The DA dismisses ANC-inspired rumours that coalition agreements have been reached at this stage. – @JAMESSELFE3

In Ekurhuleni ANC sources said the party’s negotiations with the AIC was well underway, although the party said the ANC should first reverse the decision to incorporate Matatiele into the Eastern Cape.

The party was born out of dissatisfaction in the municipality after a 2009 referendum in which residents indicated that they wanted to remain in KwaZulu-Natal.

The ANC needs the AIC’s four seats to govern in Ekurhuleni.

ANC provincial secretary Hope Papo did not want to comment on the details of negotiations, other than to say the province was negotiating under the “stewardship of our national leadership”.

The ANC Youth League in the province is also set to meet on Wednesday and make a “big announcement” afterwards after its press conference on Monday was cancelled due to “scheduling issues”.

Meanwhile UDM leader Bantu Holomisa has posted on Facebook the guidelines for negotiations as agreed on by his party, the EFF, Cope and the UF at a meeting on Sunday.

“Any co-operation must at all time respect the views of the electorate as expressed through the ballot paper,” according to the document.

“We shall not go into political marriage where we are destined to be swallowed up or serve other political parties’ agenda, but will remain true to our vision and mission as independent parties, and will favourably consider participation in a major realignment of policies.”

Other demands than those already mentioned, include better service delivery, an end to e-tolls, billing that reflects only the services a resident consumes,

Read also: Anthea Jeffery: No longer ‘prisoners of history – but still prisoners of the NDR