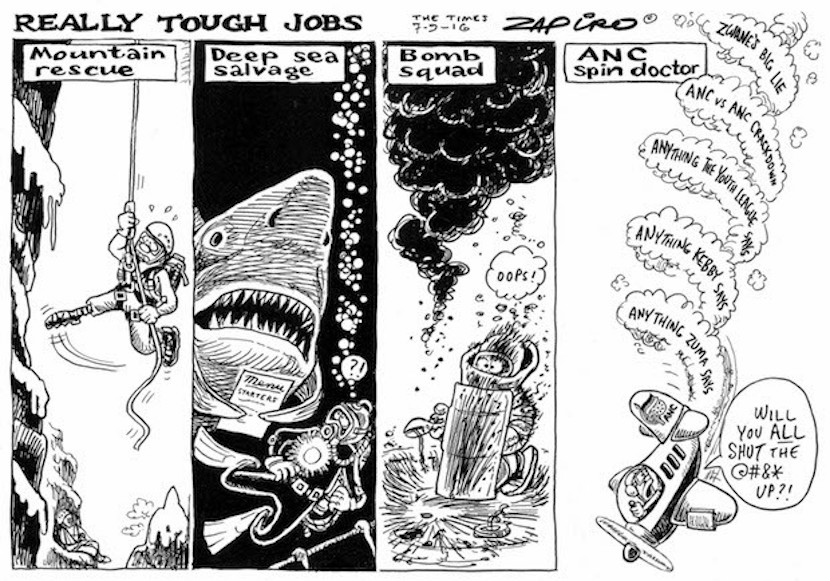 At a rare meeting last year between the South African cabinet and business leaders, President Jacob Zuma was unable to hide his irritation at accusations of a leadership crisis: “Look around you at my cabinet,” he urged the executives, “how can you say there is no leadership when you can see the people before you.” Therein lies the problem. In Zuma’s world, once someone is afforded a title, they automatically acquire the expertise to properly fulfil the role. Such nonsense can only be papered over for so long. Especially when the priority of those appointees is to serve rather crude crony capitalists. To all but Zuma and the Gupta family, it was asinine to appoint their lackey Mosebenzi Zwane to head cabinet’s critical Mining portfolio. Trouble is, the secondary school teacher started believing the propaganda and felt sufficiently emboldened to almost trigger a national crisis. He overreached with a ridiculous conclusion to attack the country’s globally admired banking system to defend the dubious honour of his benefactors. Fortunately, sanity prevailed, but in typical Zuma fashion, the reverse is simply a signal to regroup, not reform. Zwane is licking his wounds and doubtless preparing to launch another misguided missile. But the episode has also emphasised what rational observers have flagged for some time. The leadership vacuum is widening. And with competent ANC Top Six member Zweli Mkhize finally raising his head above the parapet, some believe the chasm is big enough to finally end the abuse. Zuma’s tarnished crown sits more uneasily than ever. – Alec Hogg

(Bloomberg) — It’s hard to know who’s leading South Africa.Last week the presidency repudiated the mines minister when he caused a storm of protest from business leaders by saying the cabinet authorized a judicial inquiry into banking oversight bodies after lenders cut ties to the Gupta family, who’re friends of President Jacob Zuma. That came as Finance Minister Pravin Gordhan is being investigated on allegations of contravening intelligence laws.

“There is a clear lack of national leadership,” said Theo Venter, a political analyst at North West University in Potchefstroom, west of Johannesburg. “The governing party is like a headless chicken. We are in a leadership quagmire.”

Zuma, 74, has received much of the blame for the chaos. He’s been implicated in numerous scandals, including a finding by the nation’s top court that he violated the constitution by failing to repay taxpayer funds spent on his private home. Senior officials have claimed the Guptas offered them cabinet posts. The controversies have weighed on the rand and the nation’s bonds and heightened the risk of the country’s credit rating being downgraded to junk by the end of year.

Mineral Resources Minister  Mosebenzi Zwane’s comments about a banking oversight review and the presidency’s rebuttal illustrate the extent to which the cabinet is divided, said Aubrey Matshiqi, a political analyst at the Helen Suzman Foundation, a Johannesburg-based research group.

Zwane “made a reckless and careless statement,” Kodwa said by phone from Johannesburg. “It’s just an act of ill-discipline on his behalf. I don’t think it’s symptomatic of anything bigger.”

Zwane was part of a group assigned by the cabinet to look into why South Africa’s biggest banks closed the accounts of companies linked to the Gupta family.

Misgivings about whether Zuma was the right person to steer Africa’s most-industrialized economy surfaced even before he took office in May 2009 – just weeks after prosecutors dropped 783 graft charges against him. The Democratic Alliance, the main opposition party, has been fighting ever since to have the case reinstated and won a major battle this year when the High Court ruled that prosecutors had acted irrationally — a finding that’s being appealed in the Constitutional Court.

Zuma was widely criticized for abusing his position after it emerged that the state spent 215.9 million rand ($15 million) on renovations to his rural homestead that included a swimming pool, animal enclosures and an amphitheater — alterations the president denied requesting.

Zuma also stood accused of allowing the Guptas, who were in business with his son Duduzane and employed one of his four wives, to use an air force base to transport guests to a private wedding. He denied any responsibility.

The president’s leadership was called into question in December last year when he replaced respected Finance Minister Nhlanhla Nene with little-known lawmaker David van Rooyen. Four days later, he named Gordhan to the post after coming under pressure from ruling party and business leaders to halt a run on the rand and nation’s bonds. Deputy Finance Minister Mcebisi Jonas later alleged that the Guptas offered him Nene’s post in exchange for business concessions, an allegation the family dismissed as a political ploy. Zuma denied delegating his power to make appointments.

Wrangling over control of the nation’s finances has continued unabated. Zuma has dismissed Gordhan’s request to fire the nation’s tax chief for insubordination and delayed his attempts to appoint a new board at the state-owned airline.

Last month, a special police investigative unit known as the Hawks said Gordhan may be charged in connection with allegations that he established an illicit investigative unit when he headed the South African Revenue Service — a case opposition parties said Zuma may use to appoint a more pliant head of the National Treasury. Zuma said that while Gordhan has his full support, the law must take its course.

“It shows the extent to which the cabinet is divided,” Matshiqi of the Helen Suzman Foundation said. “We are now closer to being downgraded than we were before the hawks, Pravin story broke.”

Gwede Mantashe, the ANC’s secretary-general, criticized how the police treated the finance minister and rebuked party officials who spoke out against Gordhan. His deputy Jessie Duarte and Van Rooyen, now the local government minister, had accused Gordhan of portraying himself as being above the law by refusing to present himself to the Hawks for questioning. Gordhan said his lawyers had advised him he was under no legal obligation to do so and has denied any wrongdoing.

Read also: Is ANC heading for a split? Inside the Zuma vs Gordhan war

The repeated crises have raised question marks over whether the country’s leaders have the ability to do their jobs and what motivates them, according to Ivor Sarakinsky, a lecturer at the University of the Witwatersrand’s School of Governance.

“There is clearly a leadership vacuum,” Sarakinsky said. “People who should lead don’t, and there are a large number of people jockeying for policies that don’t fit in with government’s priorities.”