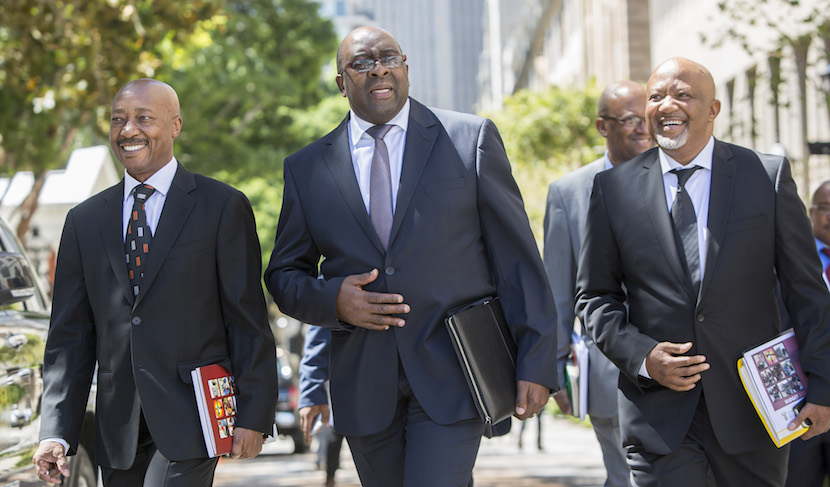 One of the contemporary mysteries of South African governance is how bombshell claims by deputy finance minister Mcebisi Jonas were quietly brushed to one side. Jonas claims he turned down a conditions attached offer from the crony capitalist Gupta family to replace his former boss, former finance minister Nhlanhla Nene. As this came hard on the heels of a similar disclosure by could-have-been public enterprises minister Vytjie Mentor, a rational observer would expect all hell to have broken loose within the ruling ANC. Instead, an “internal investigation” cleared President Jacob Zuma’s Indian immigrant friends and Jonas sailed on in his job as though nothing had happened. Of course, like a duck swimming against the current, while all looks serene, frantic activity is happening beneath the surface. And although Jonas’s words are measured, as he showed in an interview yesterday, he hasn’t backed down. – Alec Hogg

(Bloomberg) — South African Deputy Finance Minister Mcebisi Jonas is “worried” about the impact of a perception that state institutions are being used to advance political agendas, saying the issue is a distraction to efforts to expand the economy.“

Political behaviour does sometimes impact negatively on certainty” and “times are tough, we should be focused on growing the economy,” he said in an interview on Johannesburg-based Talk Radio 702 on Tuesday.

The National Treasury has been engaged in open conflict with state-owned companies over their management and spending plans. The department issued a statement last month saying it is threatening court action to stop a joint venture in Asia by arms company Denel SOC Ltd.. It has also said that power utility Eskom Holdings SOC Ltd. is resisting a review of its contracts.

“Treasury has a central role in overseeing the fiscal health of the country, so it’s natural that we will have an interest in actually looking at the financial performance of all” state-owned enterprises, Jonas said.

The Gupta family's #StateCapture of ANC government is so deep they even dared to offer Finance Min Nene’s job to his deputy, Mcebisi Jonas.

Africa’s most industrialized economy expanded an annualized 3.3 percent in the three months through June, after contracting 1.2 percent in the prior quarter, as mining and manufacturing rebounded. The central bank, which had predicted no growth this year, intends to revise its forecasts although the annual figure will remain low, Governor Lesetja Kganyago said earlier this month.

Jonas said in a statement on March 16 that members of the Gupta family, who are friends with President Jacob Zuma, personally offered him former Finance Minister Nhlanhla Nene’s post. He rejected the approach. Zuma fired Nene in December and replaced him with a little-known lawmaker, sparking a sell-off in the nation’s bonds and the rand. The Gupta family deny the claims and Zuma has said he alone has the authority to appoint cabinet ministers.

Jonas has met with the Public Protector’s office as part of an investigation into allegations that the Guptas wielded influence over the appointment of government ministers. A group of senior church leaders, the Dominican Order, was the first organization to request an investigation into whether Zuma, 74, allowed members of the family to choose ministers. The group also asked for a probe into the awarding of contracts and licenses to companies linked to the Guptas, according to Public Protector Thuli Madonsela.

How much are the GUPTA'S paying the Cabinet? It's not enough that the likes of Mcebisi Jonas spoke out! What must happen? #Oakbay #judiciary

The ruling African National Congress dropped a probe into the family’s role in government business after only one person made a written submission claiming undue influence, Gwede Mantashe, the party’s secretary-general, said on May 31.