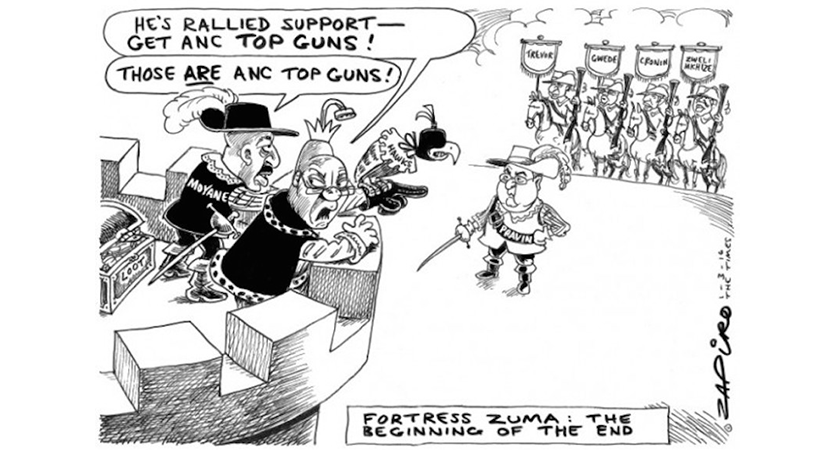 This contribution from veteran political editor Max du Preez is dynamite. He uncovers why President Jacob Zuma is in such a pickle over the battle for the soul of SA’s tax collection agency. Pravin Gordhan, the Finance Minister Zuma fired and then had forced back upon him has become more career threatening than his arch enemy Thabo Mbeki ever was. Because of his decade running SARS and network of contacts who were subsequently fired from the agency, Gordhan knows exactly where the bodies are buried. Last week he was determined to expose these shallow graves of financial corruption and pillaging of the public purse. The only thing stopping this is Zuma’s pawn Tom Moyane’s continued reign at SARS. Given what Du Preez exposes in the article republished here with permission of News24, yesterday’s truce cannot last. South Africa has been Huang, drawn and quartered by Zuma’s Chinese crony – and other beneficiaries of the President’s largesse. Expect Zuma to deploy every powerful lever at his call. Including State Security which, in SA, has a history of getting people to shut up. Including those in National Treasury who first set the alarm bells ringing after the Zuma-inspired “9/12” on December 9 last year. The stakes are now that high. – Alec Hogg

One of the keys, perhaps the main key, to the Sars hostility towards finance minister Pravin Gordhan is a dossier in the safe at Sars headquarters containing dynamite allegations of corruption, fraud, front companies and foreign bank accounts against prominent benefactors of President Jacob Zuma.

Several billions of rands are at stake and Zuma would be extremely embarrassed if the alleged dossier were to be acted upon. It could well open him up to prosecution himself and/or to a massive income tax bill – at least for evading donations tax.

The investigations were conducted by the crack Sars investigative unit established during Gordhan’s reign at Sars. Sars actually sent a letter to Zuma’s lawyer asking the president’s response to the allegations. The dossiers were eventually handed to the new Sars commissioner now in a public spat with Gordhan, Tom Moyane.

I was told that the minister of State Security and Zuma loyalist, David Mahlobo, had personally involved himself with the safeguarding of the dossier.

I was also told that at least one member of the ANC Top Six was briefed on the contents of the dossier.

Among the Zuma friends investigated by the Sars controversial investigations unit were super-wealthy businessmen Thoshan Panday of KwaZulu-Natal and Jen Chih “Robert” Huang, a Taiwanese citizen operating in South Africa.

Huang is a close business associate of Khulubuse Zuma, the president’s nephew, and is a key middleman between South African and Chinese business interests. His company, Mpisi Trading, also stands accused of paying Swaziland politicians many millions. Netwerk24.com reported on 19 February last year that president Zuma involved himself personally in the settling of a R540m Sars claim against Huang. Huang has apparently on occasion flown from Durban to Nkandla with Zuma in an Air Force helicopter.

Huang supplied the ANC with R118m worth of T-shirts before the 2014 election, but the delivery was stopped by Sars because duties and taxes were not paid. The Mail & Guardian reported in December 2014 that this move “was one of the factors that fed into the leadership purge of SARS”.

A PriceWaterhouseCoopers forensics investigation alleged that Panday had paid vast amounts of money to senior police officers and manipulated tenders the police then awarded to his companies. Charges of corruption and bribery against him and Colonel Navin Madhoe were controversially dropped in 2013.

It is widely accepted as uncontested fact that Zuma had ordered the clearing out of the SARS top structure and appointed Moyane, an old friend and MK comrade and former head of prisons, to take over the leadership.

It is virtually a carbon copy of what he had done at the Hawks and the National Prosecuting Authority. In both cases he wielded his machete after these two bodies started investigations against him or his close friends.

Gordhan, the one man who could prevent a downgrade of the South African economy to junk status, is now demanding that Zuma fire Moyane – it is a presidential appointment – or he would resign.

There can be little doubt that the economy would verge on total collapse if Gordhan were to resign or was fired.

Zuma was this week still playing his games. He said Gordhan’s job is not on the line, but had earlier asked that Gordhan cooperate with the Hawks’ investigation into the Sars investigation unit.

The Hawks sent Gordhan a list of 27 questions and wanted a response by tomorrow. There is no sign so far that Gordhan plans to meet that deadline. He said the letter was “an attempt by some individuals who have no interest in South Africa, its future, its economic prospects and the welfare of its people”.

He has, though, issued a statement saying that the investigative unit was legally constituted and approved on ministerial level; that its finances were approved according to the normal Sars practices and was audited by the Auditor General; and that Sars ensured at all times that it functioned within legal and policy frameworks and the laws of the country.

But if Zuma were forced to fire Moyane, it could mean the unraveling of the Zuma power group’s hold on critical state institutions that it had worked so hard at establishing. Who would be next? The SAA’s Dudu Myeni?

Read also: Helen Zille: Get your grubby paws away from SARS, Mr President

When all his pawns had fallen, Zuma will face his worst nightmare: prosecution on corruption, fraud, money laundering and racketeering charges relating to his relationship with Schabir Shaik, but also relating to the dossier still in Tom Moyane’s safe. (And the DA’s six-year legal battles to get the old corruption charges reinstated resumes in court today…)

The explicit public support Gordhan has received from ANC secretary general Gwede Mantashe and from the SA Communist Party is very significant.

Several senior cabinet ministers are members of the SACP and will probably follow the party leadership. It goes without saying that deputy president Cyril Ramaphosa is on the Gordhan side. The role that treasurer-general Zweli Mkhize had played in getting the appointment of Des van Rooyen overturned suggests that may no longer be in the Zuma camp.

But Zuma’s tentacles of patronage reach very wide. Many in leadership positions in the provinces, the civil service and especially the ANC’s highest organ, the 90-odd member National Executive Committee, benefit. Will they protect their privileges at all costs, or will they realise that the ship is sinking and jump?

And for how long will the state security services protect Zuma instead of sticking to their mandate “to provide the government with intelligence on domestic and foreign threats or potential threats to national stability, the constitutional order, and the safety and wellbeing of our people”?

Zuma is weaker than he’s ever been, but he’s not yet a spent force. He has the potential to pulldown the pillars of our economy like Samson of old. – News24