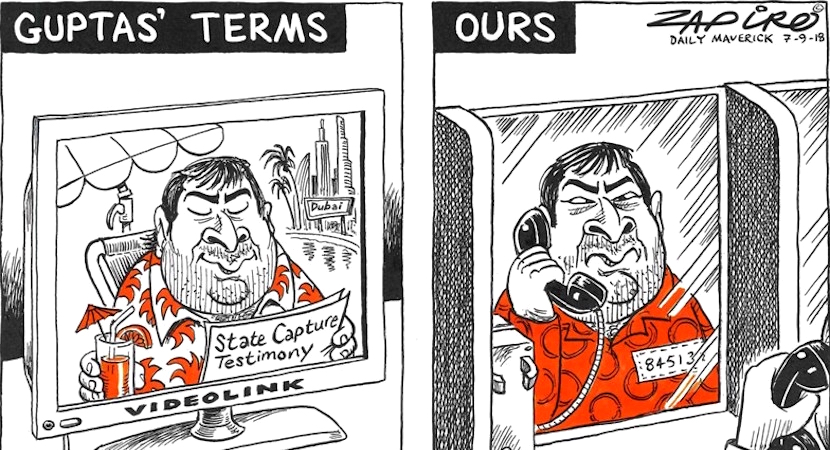 JOHANNESBURG — The Guptas – who these days travel between India and Dubai – want to give testimony in the Zondo Commission into state capture in Johannesburg. But they don’t want to do so in person, as some of the brothers are technically fugitives on the run from SA and they risk being arrested if they set foot in the country. Therefore, they want to provide testimony via video link. It’s a pathetic situation for a family who fleeced the country of billions but who are now too scared to face up to the consequences of their actions. – Gareth van Zyl

(Bloomberg) — Members of the Gupta family, who’ve been implicated in looting billions of rand from state companies in South Africa, are willing to give testimony before a judicial panel investigating the alleged graft but only from outside the country, one of their lawyers said.

The three Gupta brothers have a “reasonable apprehension” that they could be arrested and prosecuted by authorities that are reckless, incompetent and wield unbridled power, Mike Hellens, Ajay Gupta’s lawyer, told the panel in Johannesburg on Thursday. “They will not expose themselves to bodies that behave in such a manner.”

The Guptas are friends with Jacob Zuma, who was forced by the ruling party to resign as president in February, and were in business with his son, Duduzane. The nation’s former anti-graft ombudsman alleged in a report that they may have used their political connections to influence cabinet appointments and the awarding of state contracts, and directed that the judicial panel be established to investigate the matter further.

The Guptas would testify before the panel headed by Deputy Chief Justice Raymond Zondo in another country or via video conference, Hellens said. Should the panel not agree to their terms it could be deprived of vital information, he said.