(Reuters) – Michael Phelps, the most decorated swimmer of all time, will come out of retirement next week, the clearest signal yet that he is getting ready to make an Olympic comeback at the 2016 Rio de Janeiro Games.

The American, who has not competed since the 2012 London Games, will headline an April 24-26 meet in Mesa, Arizona, with fellow Olympians Ryan Lochte and Katie Ledecky, USA Swimming said in a statement on Monday. 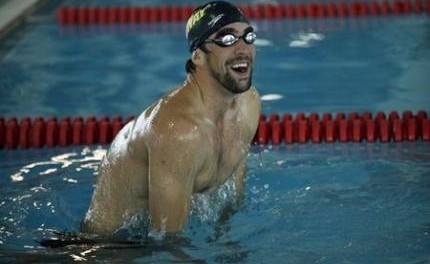 Phelps’s return to the pool touched off a wave of excitement on social media that added more fuel to speculation that the 28-year-old is planning to compete in Brazil, but his longtime coach did little to fan the flames.

“I don’t think anybody knows,” Bob Bowman told Reuters in a phone interview when asked if Phelps’s return to competitive swimming was a step toward swimming at the 2016 Olympics.

“Certainly he has done some training and gotten into decent physical condition and thought it would be fun to try some racing and we will find out next week how that goes.

“I don’t think we can really call it a comeback yet. We’ll see how next week goes and take it from there. But (Rio) is a possibility since he decided to consistently train.”

Already the most decorated Olympian of all time, Phelps rejoined the U.S. Anti-Doping Agency’s drug testing programme last November offering the first hint that he was considering a return to the pool in a bid for more Olympic gold.

World swimming governing body FINA requires athletes to be tested for a minimum of nine months before competing in sanctioned events. Phelps was tested twice in the quarter ended Sept. 30, according to data released by USADA.

“He went through the nine-month probation period from FINA on the drug testing to get back into the competitive pool, so he is that serious about (a comeback),” said Bowman.

Phelps retired from competitive swimming after winning four gold and two silver medals at the 2012 London Olympics to take his career tally to 22, 18 of which were gold.

‘GREAT FOR SWIMMING’He had repeatedly said before the London Games he would not contemplate a comeback and consider a return to compete at what would be his fifth Olympics in Rio. Retired U.S. swimmer Dara Torres, who has won 12 medals in five Olympics, was not surprised by news Phelps was returning to competitive swimming, saying it was something she expected since the day he retired.

“So funny because when he announced his retirement I went in Twitter and tweeted “who wants to bet MP (Michael Phelps) will come out of retirement for Rio?”, Torres told Reuters in an email. “And he tweeted me back and said ‘I will!’

“You know I feel sorry for those swimmers who thought they had a better shot of winning a gold because Michael Phelps was retired.

“He’s an unbelievable athlete and it’s great for the sport of swimming.”

Bowman said Phelps had been entered in the 100 metres freestyle, 100m butterfly and the 50m butterfly.

“It’s just a start, I think it is something he will have a good time with,” said Bowman. “Unfortunately the program has the 100 metre free and 100 fly, two of the events, on the first day so in the morning he will probably swim both and if he makes it to the finals we’ll probably pick one to swim in at night.

“The second day we entered him in the 50 and he will probably do the butterfly instead of the freestyle just for fun.”

While Bowman had downplayed any suggestions Phelps was considering a return, he said he was now in full support of his comeback because the swimmer was doing it the right way and for all the right reasons.

“He’s really enjoying it and that is why I am condoning his return,” said Bowman. “He is doing it for all the right reasons.

“He doesn’t have anything to prove, his legacy is sealed forever and he is just doing it because he loves to swim.”