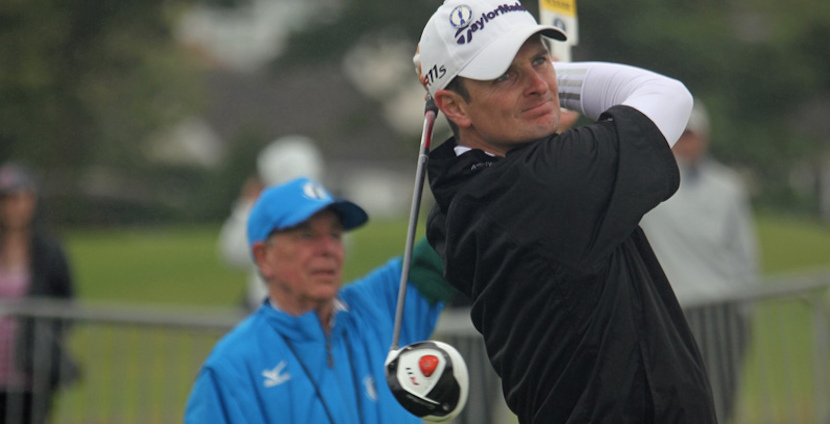 Putting club to ball. Sounds simple doesn’t it. Not so for the Sunday morning beginner, with some calling it the most frustrating game around that has an addiction second to none. And merely because the optimist in us thinks the next shot can only get better. And it sometimes seems the more we try, the worse it gets. And don’t think the professionals have it any easier. This weekend sees 156 golfers put their clubs to the test at the 115th United States Open being played at Chambers. And they may have the required skill set but throw in some expected gail force winds, long distances and driving rain, everyone becomes equal. And it’s over 4 days. Happy Gilmour. – Stuart Lowman

“The 12th hole is like downshifting in a Ford Chicane on a LeMans Racetrack”.

“The putting surface might be best described as a dogleg left punchbowl that’s barely clinging to a hill”.

By all accounts Chambers Bay Golf course – which hosts the 115th U.S. Open this week – is a beast

Conditions could very well make professionals look like amateurs – but without any doubt this is one not to be missed as a star studded field, including the top 60 golfers in the world, tee it up in an attempt to engrave their names into the history books.

The 156 man field does not lack pedigree but this will all count for nothing when a 40 mile wind and driving rain are trying to knock them off their feet. What’s going to count is grit, resolve and an attitude that says – “no matter what is thrown at me I’m bouncing back”.

Oh, and the ability to hit it dead straight, judge ridiculously strong winds, get up and down from anywhere and make every putt within 10 feet.

Speaking of dead straight drivers – one shouldn’t stray too far from Aussie Jason Day and world number one Rory McIlroy who are number 1 and 2 respectively on most fairways hit in 2015. But any conversation about favourites is always going to involve McIlroy and Day.

For my money – and I could be eating humble pie come Sunday – McIlroy has been out of sorts this year. With his latest disappointment coming at the Irish Open where he missed the cut – firing a disappointing 80 and 71.

Perhaps he needs another break up to spur him on. After calling off his engagement to Caroline Wozniacki just over 12 months ago, McIlroy has played in 24 events – winning 7 (2 majors), finishing runner up in 4 and inside the top 20 on 20 occasions.

Speaking of break ups – the golfing world continues to wait with baited breath for Tiger Woods to return to greatness.

You won’t struggle to find opinion pieces about Tiger so I won’t add to them here, suffice to say that his problems aren’t with golfing ability– but rather with state of mind and for a sport that is 90% mental and 10% ability – that’s a big issue.

When the Chambers Bay wind picks up and the freezing rain makes you want to give up and go home I predict Tiger will be doing just that, and his Bombardier Lear Jet won’t be clearing for take-off on Sunday but rather Friday as he misses the cut or withdraws.

So if it’s not going to be Rory or Tiger then who?

The current leader in sand save percentages – Brendon Todd?

Matt Kuchar – the golfer who has drained the most one putts in 2015?

Or Luke Guthrie who is currently enjoying a phenomenal streak having hit his last 30 greens in regulation?

I believe Europeans will continue their dominance (four of the last five U.S. Open winners have been European) and on Sunday evening – Englishman Justin Rose will be holding the trophy aloft.

Born in South Africa (always a good start) before moving to the UK, this is a man who grew up on links golf and is not shy to take on a 40 mile wind.

He’s also got a U.S. Open title to his name already, having won in 2013 at Merion Golf Club, and is no stranger to pressure situations. His stats aren’t too bad either – 2nd in sand saves, 2nd in birdie average and 10th in ball striking. He’s also the 7th most accurate off the tee between 240 and 280 yards – a vital distance for links golf.

And wouldn’t be a misplaced bet at odds of 20/1 with the bookies.

And what of our South Africans trying to add to the five U.S. Open titles that Retief Goosen (two), Ernie Els (two) and Gary Player (one) already share.

An achievement in itself is the fact that we are the third most represented country at the tournament with no less than 9 South Africans in the field. Only the US (84) and the UK (10) have more.

As for a winner though, the latest form from Ernie, Louis, Charl, Branden and George doesn’t fill me with too much confidence and one has to feel that the Goose is past his prime and the occasion will be too big for Thomas Aitken, Garth Mulroy and Tjaart van der Walt.

No one gave Ernie a chance at the British Open in 2012 though and he was quick to add a second Claret jug to his name when the opportunity presented itself (or rather an Aussie choked) so if you are looking for an outside punt on a Saffa then I would look no further than the experience of Mr Theodore Els himself.

If you have some free time in the lead up to the tournament – jump onto Facebook and support columnist Larry Stone’s bid to get Freddie Couples a late exemption to play – if not for the fact that Freddie is still one of the most popular pros then maybe just to watch a 56 year old, past his prime, in howling winds and freezing rain.