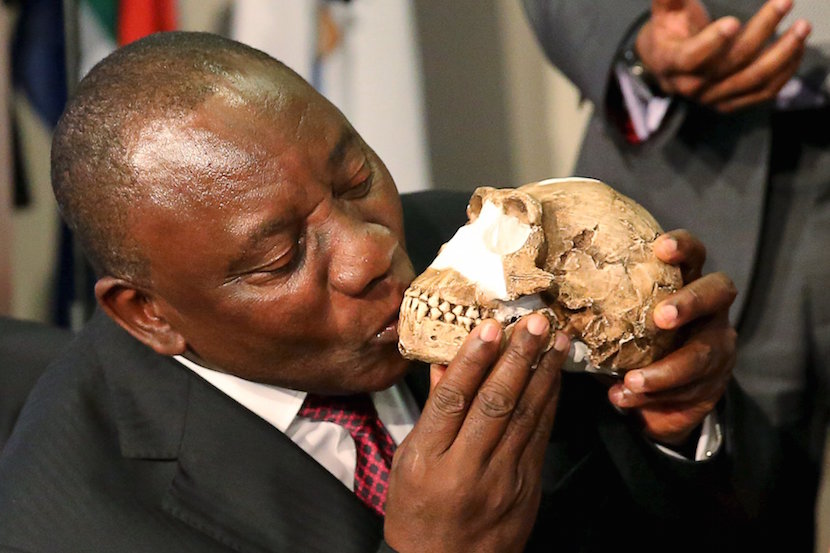 The fossilised bones of 15 bodies from a previously unknown human species have been discovered in a cave in South Africa, it was announced Thursday, in what scientists hailed as a breakthrough in evolution research.

About 1,500 fossils were found deep in a cave system outside Johannesburg, hidden in an underground chamber only accessible via several steep climbs and rock crevasses.

The new species has been named “Homo naledi” after the “Rising Star” cave where the bones were found. Naledi means “star” in Sesotho, a local South African language.

Experts are uncertain how old the bones are, but say they were probably placed there after death — a discovery that shines fresh light on the origin of the mankind.

“We have just met a new species of human relative that deliberately disposed of its dead,” Lee Berger, research professor at the University of the Witwatersrand in Johannesburg, announced as the fossils were unveiled.

“Until this moment in history we thought the idea of ritualised behaviours directed towards the dead… was actually unique to Homo sapiens.

“We saw ourselves as different. We have now seen, we believe, a species that had that same capability — and it is an extraordinary thing.”

The bones were first discovered in 2013 by Witwatersrand University scientists and volunteer cavers in the Cradle of Humankind, a UNESCO World Heritage Site, 50 kilometres (30 miles) northwest of Johannesburg.

Ancient human remains have been found in the area since excavations begun in the 1920s.

“The discovery of so many fossils belonging to at least 15 individuals is remarkable,” said Professor Chris Stringer, from the Natural History Museum in London, one of the lead analysts on the discovery.

The find highlighted “the complexity of the human family tree and the need for further research to understand the history and ultimate origins of our species,” Stringer added.

Scientists say the hands, wrists and feet of the bodies were similar to modern humans, but the brain size and upper body were much more like the earliest humans.

“Homo naledi had a tiny brain, about the size of an average orange, perched atop a very slender body,” said John Hawks, of the University of Wisconsin-Madison, a senior author on the academic paper detailing the new species. Homo naledi stood approximately 1.5 metres (about 5 feet) tall and weighed about 45 kilos (almost 100 pounds).

“The hands suggest tool-using capabilities,” said Tracy Kivell of the University of Kent, in Britain, who was part of the team that studied Homo Naledi’s anatomy. “Surprisingly, Homo naledi has extremely curved fingers, more curved than almost any other species of early hominin, which clearly demonstrates climbing capabilities,” she said.

The first expedition to the cave chamber in 2013 lasted for 21 days and involved more than 60 specialist cavers and scientists working in dangerous underground conditions. Since then scientists have been studying the fossils, before revealing their conclusions. “This chamber has not given up all of its secrets,” Berger added. “There are potentially hundreds if not thousands of remains of Homo naledi still down there.”

An international team of scientists announced the discovery of fossils from a previously unknown human relative species in a cave northwest of Johannesburg that sheds new light on the origins of humankind.

Known as Homo naledi, the new species measured about 1.5 meters (five feet) tall on average, weighed about 45 kilograms (99 pounds), and had hands that suggested it had tool-using and climbing capabilities, according to the scientists. While its skull and teeth were similar to the earliest-known members of the Homo genus, its shoulders were more similar to those of apes. The find was announced by the University of the Witwatersrand, the National Geographic Society and South Africa’s Department of Science and Technology and National Research Foundation and details were published in the scientific journal eLife and National Geographic magazine.

This is the inside story on how they found #HomoNaledi buried deep in a cave http://t.co/EjTU4oGDI9 pic.twitter.com/iBh1OqnoV8 — New Scientist (@newscientist) September 10, 2015

“Homo naledi appears to have intentionally deposited bodies of its dead in a remote cave chamber, a behavior previously thought limited to humans,” the researchers said. “So far, the team has recovered parts of at least 15 individuals of the same species, a small fraction of the fossils believed to remain in the chamber.”

The fossils, which consist of infants, children, adults and elderly individuals, have yet to be dated.

“With almost every bone in the body represented multiple times, Homo naledi is already practically the best-known fossil member of our lineage,” said Lee Berger, research professor at the University of the Witwatersrand’s Evolutionary Studies Institute, who led the two expeditions that discovered and recovered the fossils.