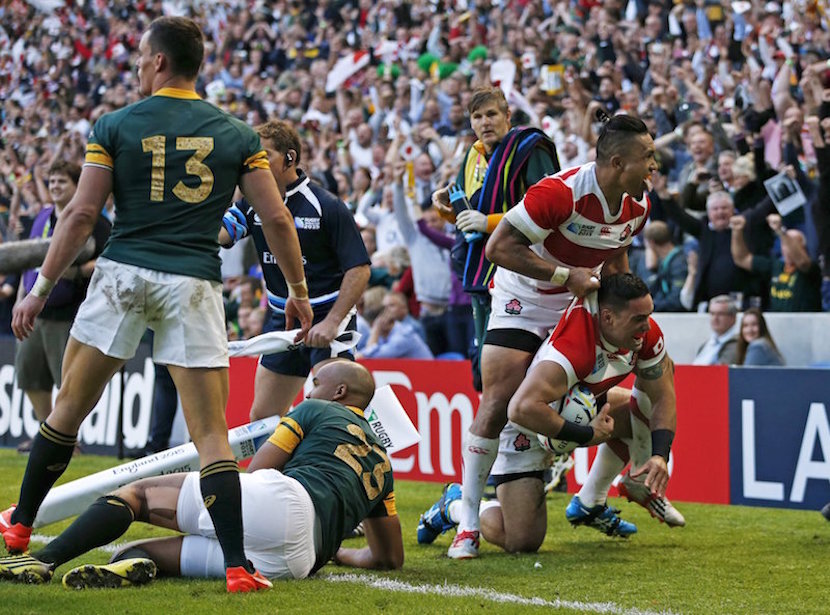 By Pirate Irwin of Agence France-Presse

Eddie Jones masterminded the greatest World Cup upset when Japan beat South Africa but he now needs them to beat Samoa to help the Brave Blossoms’ campaign to reach the quarter finals.

Jones, who took responsibility for the 45-10 defeat inflicted on Japan by Scotland on Wednesday, has labelled Saturday’s game as something he would pay to see as it promises to be a ‘bashfest’.

Jones, whose side stood up to the brute force of the Springboks throughout the epic 34-32 win in Brighton, needs a South African victory almost as much as the Springboks do against the physically intimidating Samoans who beat the United States on Sunday.

A Springbok win would boost Japanese chances of making history in reaching the quarter-finals for the first time, and add to the surge in interest in rugby that will augur well for their hosting of the 2019 World Cup.

“The Samoans could come out of the match with the Springboks bruised and battered,” said Jones.

“That match will be a bit like a Ultimate Fighting Championship fight with a fair bit of Springbok power coming forward at the Samoans.

“You read the books on physiology and they say you need six days to recover after exercise like the boys had against the Springboks.

The disappointment of losing masked a brilliant performance by Japan. Reminds us of the huge role Eddie Jones played in Boks RWC ’07 success

“So after the ‘Boks game the Samoans will have at best the six days break compared to the three we had prior to the Scottish match, so I guess what goes around comes around.”

Jones’ wish for a ‘bashfest’ may be granted as Samoa coach Stephen Betham also believes Saturday’s match may need an 18 certificate for sensitive viewers.

“But in saying that we can’t come to a war with our hands and a pocket knife, we’ve got to bring all we’ve got and face up.

“We’ve always expected South Africa to be our toughest opponent here and that hasn’t changed one bit. We expect them to be even harder now because that surprise factor is not in there.

Read also: Mailbox: RWC 2015 – not the only thing Japan’s beaten SA at

“I think they are going to attack us right from the start. The first 15 minutes will be crucial.

“We have got to man up in that first 15 minutes because if we shy out in any way then it is going to be a long day at the office.”

South Africa could also do Jones a favour in introducing enough needle they provoke the Samoans into going back to their bad old habits of ill discipline.

It was something they kept well under control against the less challenging USA, but if they lose it against the ‘Boks it could conceivably cost them a key player or two for the Japan game.

The more damage done the better for Jones because as he said on Wednesday in the immediate aftermath of the defeat the result in Japan’s game with Samoa will probably decide their fate.

“If we can knock Samoa off in 10 days then we have a terrific chance, if we don’t then we’re cooked,” said Jones.

As the table stands Scotland have five points and lead Japan and Samoa by a point with the Springboks on two, though the Japanese have played a game more than the others.