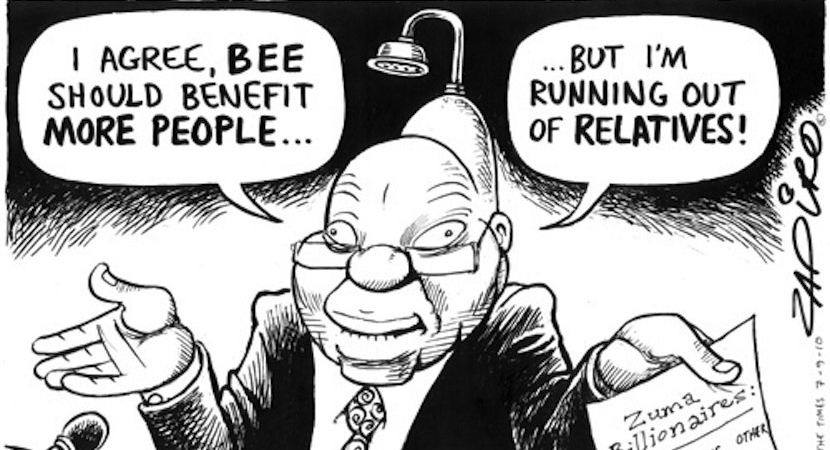 LONDON — Among our credos at Biznews is to never underestimate the intelligence of our community members, especially when they have access to information. We believe an endless font of knowledge and wisdom exists outside of the narrow confines of our own operations. The challenge is to tap into it. I was hoping we’d be able to make a breakthrough with the now publicly available #GuptaLeaks and in today’s Daily Insider encouraged Biznews community members to have a look and share unique insights with us. Paul Janisch, a BEE compliance expert, wasted no time. As you’ll read from his contribution below, he assessed the Gupta companies’ shocking BEE scorecards. But this did not hurt their businesses. Rules that apply to everyone else clearly do not apply when you’re holding the puppet strings. – Alec Hogg

You might have heard that the guptaleak database is being made available to any investigative journalist who may have an interest in our dear country trashers. Alec Hogg sent out a notice last night telling us that:

But even worse came later for the plundering friends of president Jacob Zuma. At the request of the SA Parliament’s Portfolio Committee on Public Enterprises, a chunk of documents from the incriminating #GuptaLeaks have been made publicly available online.

Published by the Platform for the Protection of Whistleblowers in Africa (PPLAAF), a selection from hundreds of thousands of emails, documents and invoices is there for everyone to see, neatly divided into easily searchable sections. So if you ever fancied yourself as an investigative journo here’s your chance to “join the dots.”

PPLAAF says the site will be accessible for the next 10 days, so no time to tarry. The link to this veritable treasure chest is here. Happy hunting.

Amongst the numerous emails are a number of BEE mails. I haven’t really looked through them in much detail but the ones I did look at were about their 2016 BEE scorecard and information that had been requested by the verification agency. This prompted me to have a look at the BEE scorecards I could find that belong to our Gupta adversaries. I found two – TNA (The New Age) and Sahara Computers – both done by a reputable verification agency who have told me they’ve since cut ties with them. I’m not going to question these scorecards because I know the guys who did them and I have huge amount of respect for them. But take a look at them.

I hope that the good reader sees what I see. No score for socio-economic development (SED) and nothing for enterprise (etc) development (ED). For the uninitiated SED is charitable donations and ED is the development of black businesses. They obviously don’t feel as though they need to contribute to these two elements because it detracts from their core business of taking stuff. We shouldn’t be surprised at all.  But next time their supporters like andile half-pint (who is obviously terrified of the Israelis and he should be) tells you how great they are just consider that in both cases their businesses turned over the QSE threshold (over R50m under the revised codes) and they are remarkably un-generous.

But there is a bigger story here, one about how the government will turn a blind eye to “empowerment” to further their own corrupt needs. The Guptas are obviously so confident in their government connections that they do not need to even make a vague attempt to comply with government’s empowerment requirements.  Take a look at their potential competitors.

This is pretty much in the same league as the Waterkloof landing – it’s extreme arrogance and another gupta finger.