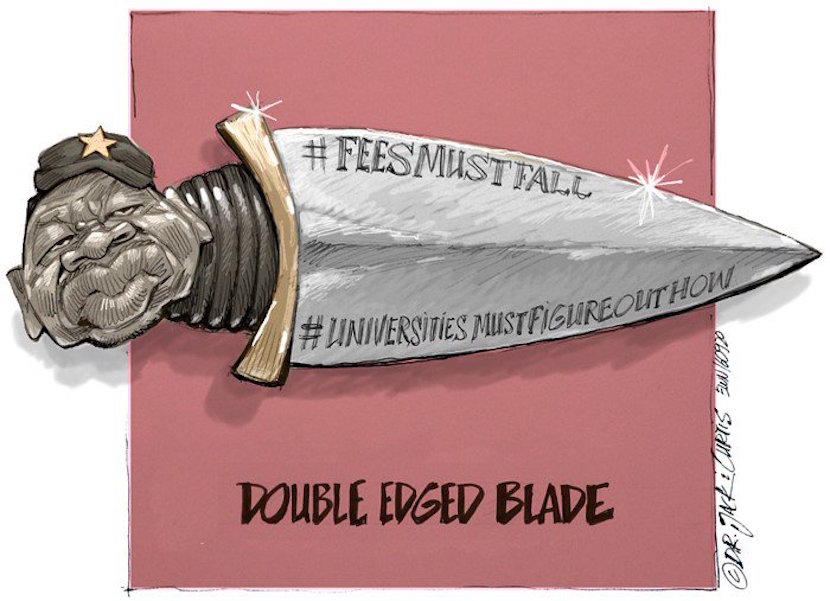 We all seem to have forgotten about the biggest stakeholder in the debate, the South African family.

For some odd reason ‘The Lord above made man to raise his children. Which is the right and proper thing to do.’ So when the right to free basic education runs out, South African families will literally commit financial suicide to somehow get their children into university.

One must question the results generated by basic education and whether they are indeed fair criteria for university admission and funding. In any event Matric results have always been a flawed indicator of university potential. The bottom line is that some students flourish at university and others simply don’t.

So often the parents’ dream of university success for their children quickly turns into the disappointment when ‘the hunk flunked’ by the end of the first year. At best family savings and retirement funds are eroded and at worst (and in many instances) parents owe their lives to a loan shark.

At the beginning of the 2016 academic year universities changed their minimum initial payment policies. And rightly so. Thus students who did not qualify for NSFAS funding were able to register if they could come up with 10 percent of the fees. Families could scratch that together, many with the help of loan sharks. But they have not been able to do much more. So university debt accumulated.

This shouldn’t and cannot continue. We have to accept the reality that 70 percent of the current student body’s parents cannot and should not carry this burden. It would be far higher if one considers those who gave up before they started.

Reading this you might think that Matthew Lester has turned to the force of #feesmustfall-for-all. No! That would be as much an unsustainable solution as the current model.

Perhaps we should accept that in reality the first year at a South African university is de facto basic education. Equivalent perhaps to A levels in the United Kingdom. This accepted, all South Africans should be entitled to free admission, but only for the first year. Perhaps the concept could be tweaked a bit to exclude those with family income of > R600 000 from the concession.

This would leave government to subsidise 70% of first year fees by way of a direct payment to the universities. By re-allocating the entire current NSFAS funding (about R15 billion) directly to the universities, the above could possibly be achieved. Massive administrative and delinquent debt savings could be applied to the same cause.

Admission to university is then based solely on academic merit. And when the hunk flunks at least the South African family does not share in the consequences.

But then comes the magic. The student who successfully completes the first year is then a ‘bankable student’ because there is every prospect of graduation two years later.

Students complain that they have accumulated debt running into hundreds of thousands by the time they graduate. And the answer to that is quite simply ‘Few students have more debt than the price of a new car. And they will buy a raftfull of those during their careers.’ The problem is that our universities have never bothered to teach students anything about debt management. And our financial institutions are not doing nearly enough to deliver on student loans.

Part 2 is to re-establish NSFAS along the following lines

And if more is needed? Well, the current framework for the 20 plus SETAs expires in 2018. This system needs an urgent review during 2017 as there are many questions regarding the performance of the SETAs. So if they are not performing, put them out of their misery and redeploy the resource.

What has been achieved?

So, #FeesMustFall, how did fellow students & vice-chancellors become your enemy instead of the govt responsible for funding universities?

Universities are provided with a sustainable funding model that does not require them to become debt collectors.

These Sunday morning ideas are of course as rough as a buffalo’s tongue. But feedback would be appreciated on [email protected].