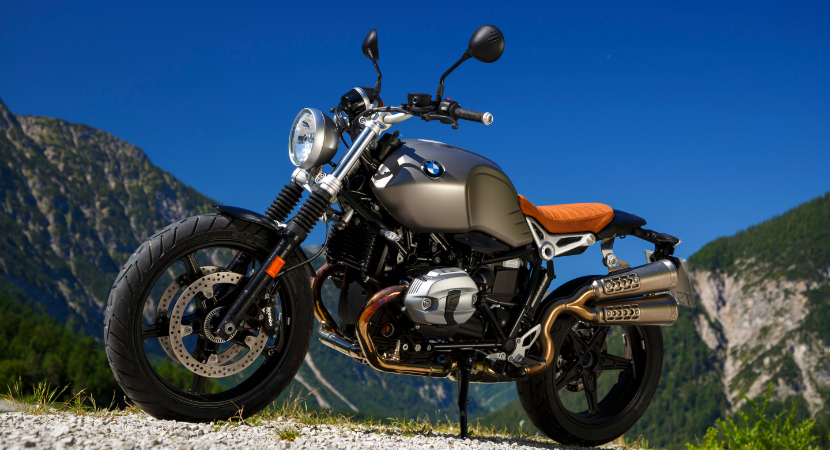 The BMW R nineT forms part of the automotive company’s heritage range of motorcycles. The name pays homage to models from the 1970’s, one of which was named the R90. You see what they did there? The similarities don’t stop at a mere name though, there’s carry over in design and configuration too.

Like its predecessors the R nineT is fitted with a two cylinder air cooled boxer motor, something that gives a lot of BMW motorcycles their unique appearance as the cylinders jut out from the bike’s torso just in front of the riders shins. In this application the motor is 1200cc with 6 cogs in the ‘box, spitting out 81kW and 119 torques onto the road. Carrying just 220kg wet the R nineT has plenty of punch.

This Scrambler edition has a more pared down, go anywhere kind of look about it. And my what a wonderful thing is it to behold. Brushed metal and aluminum abounds, with the odd accent of colour like in the brown hide-like leather seat cover, or the bronzing-bluish-hue of the exhaust manifold. There’s not a cable tie in sight, which might seem like an odd thing to note, but most motorcycles have wiring tied up in ugly nests along the frame. Not on the R nineT. Everything down to the cross drilled Brembo brake discs is a work of engineering art.

For my relatively short frame (at around 1.73m) I found the R nineT sits quite tall, but being a scrambler you’d expect some ground clearance. The seating position is comfortable, fairly upright with an agreeable bend at the knee to hit the foot pegs that sit in line with the seat. Longer rides will highlight the fact that the seat padding is on the thinner side.

As mentioned earlier the motor is a peach. Punchy from low down in the rev range, that boxer setup’s torque makes the bike a pleasure to ride in traffic or on the open road. The burble from the exhaust, in this case an Akrapovic unit, is meaty without being offensive all through the range with only a small pause between verses when shifting through the gears.

I found the bike too stiffly damped for a spirited ride along a dirt road, something that can no doubt be adjusted. For all other purposes the R nineT is fairly nimble given it’s size and weight and tremendously reassuring when leaning into bends. The higher centre of gravity can make low speed maneuvers challenging, though.

The R nineT really is an amazing machine. Granted it all comes at a price, being somewhere just north of R200,000 once you’re done with the options list but it justifies that by having all the goodness of that 70s design philosophy blended with the wonders of modern manufacturing and attention to detail that few will match. There are few bikes on sale today that I hanker after more than this one.