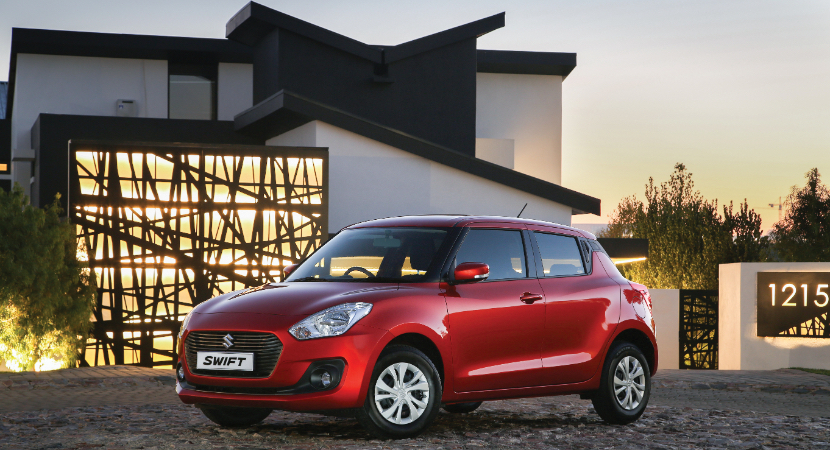 The Suzuki Swift has for a long time been our budget car of choice. In other words, if anyone ever asks what car they should buy for around the R180,000 mark we say Suzuki. It’s always been such a solid little car, with ultra low running costs, low risk of theft and enough features to keep most people quite happy. Now there’s a new one, and to see if it’s still the go-to recommendation I headed of to KZN to sample what’s on offer.

Funkier on the outside

Obviously it looks a little different. Funkier indeed. Not necessarily to everyone’s taste, but a good marmite design never hurt anyone. And more importantly it appeals to younger folk, which is largely the target market in this segment. There’s a range of optional body kit items too that in my view really transform the standard car and gives a nice personalisation touch.

Interestingly Suzuki has widened and shortened the body which gives the car a more squat stance. Wheelbase has been lengthened so overhangs are shorter. The new dimensions have allowed the designers to increase interior space, especially for rear passengers giving more head room, while up front there’s more shoulder room. Behind the occupants is a massive 58 litres extra boot space than before.

A different take on efficiency

From an engineering point of view it’s all new too. The construction uses more high tech materials to make it stiffer and perform better in a crash. It’s lighter too, weighing in at under 900kg. That’s a whopping 95kg less than the outgoing model. The impressive bit here is Suzuki’s philosophy that losing weight is the best solution to better efficiency. That’s not a new science, but definitely a forgotten one in modern times. It’s highly effective too, given that the tweaked 1.2 litre motor actually produces less power than before, but overall the Swift’s power to weight ratio is improved and it’ll use less fuel.

The obvious question is what’s it like to be in, live with and drive. And the answer is quite simple, really. It’s much the same as the old Swift, just with everything incrementally better. Controls are light, from the steering to the clutch so it’s easy to live with in traffic. It’s comfortable, even over rough roads. Definitely peppier but still super fuel efficient. Overall exactly what you want from a small hatchback.

The Swift is available in two specification levels. The GAl starts things off with air conditioning, front and rear electric windows and all the safety kit like ABS, EBD, ISOFIX child seat anchors and two airbags. The GL-model adds colour-coded side mirrors, front fog lamps and a Suzuki audio system with steering-mounted controls and Bluetooth. This one also has the choice of 5-speed manual or 5-speed AMT gearbox.

The other option is a saloon version of the Swift, called the Dzire. Aside from the obvious addition of a boot, there are various other design differences between the two both inside and out. Further focus has been placed on interior space for rear passenger in the Dzire and of course the boot itself is quite big, even when compared with other saloon’s in the segment. It is built on the same platform and uses the same 1.2 litre motor, so otherwise it’s much of the same goodness as the Swift offers.

Having spent some time with the Swift I can safely say it remains our go-to recommendation for someone who’s after a super dependable, affordable motorcar. The new one just happens to paint a little bit of additional colour into the experience making it that much more desirable.