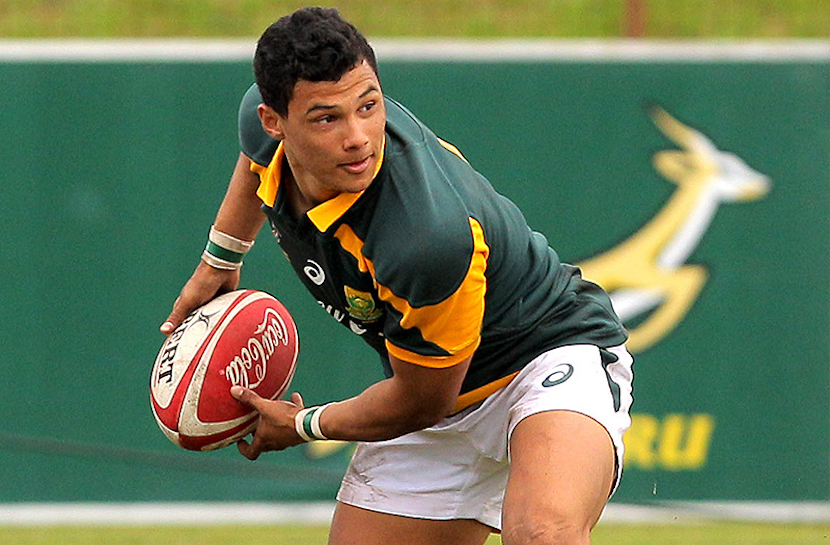 Rugby fans tend only to get excited about the Baby Boks if they’ve reached the semi-finals or final of the World Rugby Under-20 Championship. With a glut of top-flight rugby who’s got the time to even follow U-20 rugby? But when you consider that, in a couple of years’ time, some of these players could be playing Super Rugby or even representing the Springboks, now is as good a time as any to find out who’s who. While the New Zealanders, somewhat predictably, have dominated the World U-20 Championship since it began in 2008 with 5 victories, the Baby Boks have always been competitive. They won the tournament when South Africa played host in 2012, were losing finalists the following year (England sneaked in with a one-point win), and finished third on 5 occasions. So there’s a solid legacy for coach Dawie Theron’s men to build upon. Players like Lionel Mapoe, the Ebersohn brothers, Cecil Afrika, Francois Hougaard, Siya Kolisi, CJ Stander, Elton Jantjies, Pat Lambie, Branco du Preez, Eben Etzebeth, Johan Goosen, Pieter-Steph du Toit, Jan Serfontein, Handre Pollard, Seabelo Senatla and Jesse Kriel all came through the ranks of the Baby Boks before making it big. So remember the names of the 2016 squad. Possibly they’ll become household names in the near future. – David O’Sullivan

Cape Town – Junior Springbok coach Dawie Theron on Tuesday named his 28-man squad that will do battle at World Rugby Under-20 Championship in Manchester, England, from June 7 to 25.

Eastern Province centre Jeremy Ward will lead the team in the showpiece, while his provincial team-mate Junior Pokomela and 2015 SA Schools captain, Western Province lock Ernst van Rhyn, have been named as vice-captains.

Jeremy Ward will captain the Junior Springbok squad at the @WorldRugby U20 Champs in England. #buildingboks pic.twitter.com/z0uc4yqx1i

“It is always challenging to name a squad of only 28 players, especially if one considers the immense talent at junior level in South Africa, but we have selected the best possible team for the World Rugby Under-20 Championship,” said Theron.

“JT and Marco were members of our touring squad last year, and they will be able to guide the other players in terms of what to expect, while we are lucky to have nine players in the squad who have played against some of the northern hemisphere teams in the Under-18 International Series.

“Unfortunately injuries ruled a few players out of contention, and I feel for them. But nevertheless I am pleased with the squad we have selected and I believe they have potential to challenge the best teams in the showpiece.

“This team offers something different to the sides we have selected in the past, and we are excited by the prospects these players offer.”

Among the players who were ruled out of contention for selection due to injury were Golden Lions lock Rhyno Herbst, who was recently stabbed in an attack, while Western Province prop Wikus Groenewald and Blue Bulls utility forward Hendre Stassen are nursing ankle injuries.

The team will play their first official warm-up match on Friday at Wits University in Johannesburg against the Golden Lions Under-19 and Under-21 teams, with an eye on sharpening up their game before the tournament.

This will be followed by clashes against Maties in Stellenbosch on Tuesday, May 17 and the SWD Eagles in Oudtshoorn on Saturday May 21, with the team set to depart for the international showpiece on 2 June.