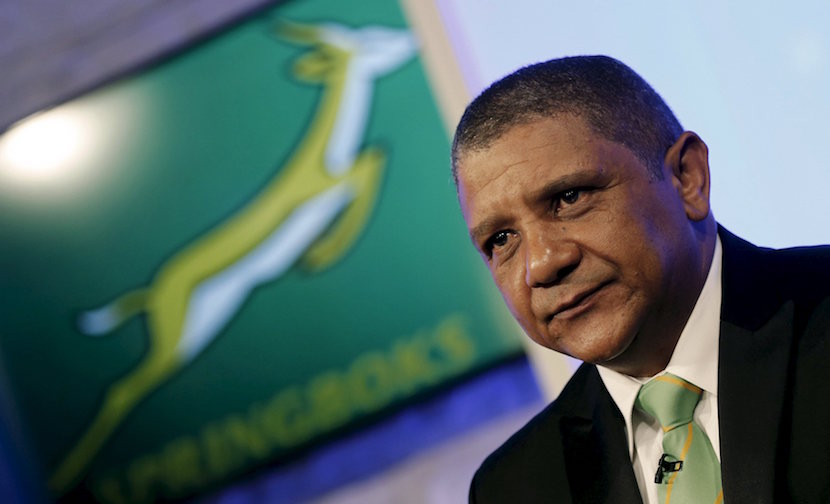 Allister Coetzee has named his 31-man Springbok squad for the Ireland Test series, and the debate about who’s in and who’s out is raging. After the recent shots fired by Sports Minister Fikile Mbalula regarding the urgent need for transformation, there will inevitably be attention on the number of black players in the team (12). We haven’t yet seen reaction from the politicians to know if this satisfies them. But one of the immediate debates is about who will captain the team.It was Coach Coetzee’s first question after announcing the team, and he’s given a few clues. For starters, he says the captain won’t be an overseas-based player so that’s Duane Vermeulen and Francois Louw out of the running. He has no shortage of franchise captains in the squad – Warren Whiteley (Lions), Pat Lambie (Sharks) and Adriaan Strauss (Bulls). Given Strauss’ Bok experience, he surely is the front-runner for the job. Sport 24’s respected rugby writer Rob Houwing casts a critical eye on Coetzee’s selection. – David O’Sullivan

The equivalent of just about an entire starting XV of players have fallen by the wayside as Allister Coetzee on Saturday revealed his maiden, 31-strong Springbok squad for the home series against Ireland in June.

Admittedly several players were unavailable for the time being or have since retired, but 14 members of predecessor Heyneke Meyer’s start-out squad of 31 for the 2015 World Cup – where the country blew hot and cold before finishing in the “bronze” berth – do not feature in Coetzee’s immediate plans.

Bryan Habana and Ruan Pienaar are not available specifically for the Irish challenge, Handre Pollard and Schalk Burger are on the injured list, whilst Victor Matfield, Fourie du Preez and Jean de Villiers have retired.

I'm actually quite pleased with Coetzee's first squad. There is a nice balance between youth and experience. #Springboks

Certainly Coetzee has not done a “Peter de Villiers” by pinning notable faith in plenty of players from a prior era as he took charge – although the quirky De Villiers did have the justification in 2008 of being keen and able to call upon gnarly members of a World Cup-winning squad from only the previous year (under Jake White).

Apart from introducing nine uncapped figures, the long-time former Stormers mastermind should earn approval in currently bellicose, impatient governmental circles for selecting 12 players of colour, and the majority of them black African.

That is four more than Meyer chose for RWC 2015, when several of those men tended to be controversially peripheral much of the time anyway – there were only three players of colour in the starting line-up for the semi-final defeat at the hands of the All Blacks.

Like Mallet said, these guys are picked on form. Cant remember when last that was the case. Very exciting! #Springboks

People will be entitled to raise an eyebrow or two over the inclusion of both Newlands-based hookers in Scarra Ntubeni and Bongi Mbonambi, especially as the Stormers set-piece has struggled to fire consistently in recent weeks.

Yet both are talented No 2s when on song, and their lack of Test knowledge is counter-balanced anyway by the presence of Adriaan Strauss, a seasoned 54-capper who is tipped to be the first-choice pick in the role and a candidate for the still-to-be-determined captaincy for the June series.

Coetzee’s most “adventurous” squad selection is arguably Garth April, the understudy at the Sharks to Pat Lambie who nevertheless grabbed his opportunities strikingly well while the more established pivot underwent a fairly length layoff.

It has been a meteoric rise this season for the 24-year-old, but there is almost certainly something about him, as they say, and Coetzee was not off the mark when he opined at the press conference immediately following the squad revelation: “You (should) always allow for late bloomers, late developers … he has good, soft touches and I like his core skills too.”

The coach has gone unapologetically lean on overseas-based players; only loose forwards Duane Vermeulen and Francois Louw and French-based loosehead prop Steven Kitshoff have been asked to make long-haul treks back to South Africa in the next few days.

And 7 Lions in the #Springboks. At last. pic.twitter.com/f71eN14h9l

As I reported several weeks ago, Coetzee always seemed likely to pluck the barrel-chested Kitshoff back from the risk of potentially falling into French Test hands somewhere down the line.

An old favourite of his at the Stormers for several years, Coetzee realised that the seriously gifted Kitshoff is still only 24 — and quite capable of putting serious heat on Bok No 1 jersey incumbent Tendai Mtawarira now that he is in the greater green-and-gold mix.

The Boks ought to still have the nucleus of a physical yet mobile pack, able to dominate in both structured and more fluid play.

Coetzee has also, correctly, largely avoided the risk of wrath from the pro-Lions lobby by giving the nod, either for the senior Bok squad or the ‘A’ group to tackle English counterparts around the same time, to a generous portion of the standout SA team in Super Rugby thus far in 2016.

The Lions played thrilling, new-age rugby in ending the Bulls’ unbeaten record at Loftus on Saturday with a startling 56-20 outcome.

Their widespread claims for higher honours just couldn’t be ignored.