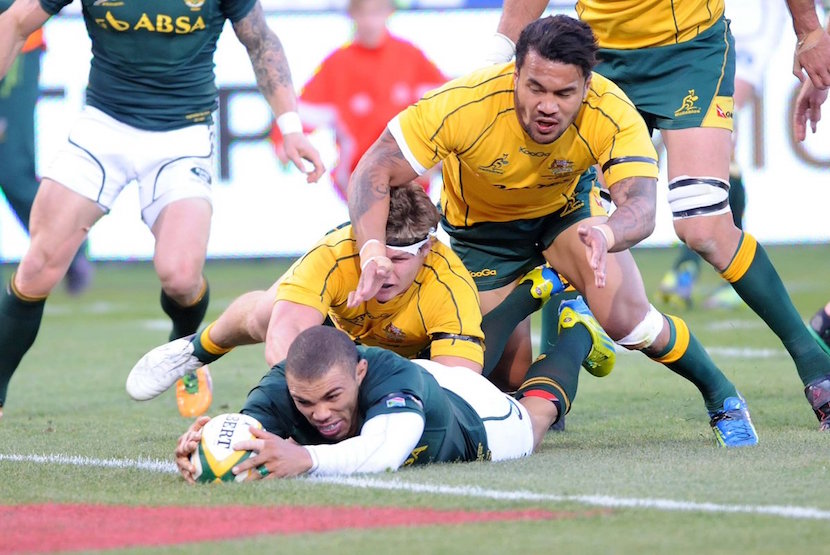 On Thursday Springbok coach Allister Coetzee will name his 23 players to take on Australia in the Rugby Championship clash at Loftus Versfeld in Pretoria. There is a growing expectation that Pat Lambie will be in the side, but will he start in place of Elton Jantjies or warm the bench initially? Coetzee might also decide to leave Jantjies out of the match 23 altogether and start with Morne Steyn at flyhalf. Faf de Klerk’s scrumhalf berth is in jeopardy after the little Lions player’s performance went backwards in recent Tests. Francois Hougaard could make the move to the halfback position from the left wing. Since Lwazi Mvovo has been released to the Sharks and Willie le Roux has been called up to the Bok squad, Coetzee might give Le Roux the number 11 jersey after leaving him out of the Rugby Championship up until now. It’s inevitable that Bongi Mbonambi will be on the bench after Lions hooker Malcolm Marx was released from the squad. Marx had a below-par debut when he replaced Adriaan Strauss early in the second half of the defeat to the All Blacks in Christchurch. Coetzee will have an eye on his transformation requirements and Mbonambi needs much-needed game time to prove his worth at international level. Loftus has been a lucky ground for South Africa against Australia over the years. Sport24’s Rob Houwing recalls some of the better moments enjoyed by Bok fans against the Wallabies. – David O’Sullivan

Their confidence may well be brittle after three defeats in a row, but if the Springboks need a pick-me-up, studying their 100 percent Pretoria record against Saturday’s opponents the Wallabies seems an advisable route.

South Africa have won all six bilateral Tests at Loftus since 1963, so will seek completion of a “Magnificent Seven” in the Castle Rugby Championship clash this weekend.

This was probably a bit of a first for an international coach: fired after thrashing a traditional rival by almost 40 points.

But that was the case for Carel du Plessis, given that this spectacular outcome was deemed an afterthought to bigger-picture Bok angst – they had a little unluckily surrendered a home series to the British and Irish Lions, and the Wallaby grilling right at the back end of the former Tri-Nations simply saw SA stave off bottom place in a competition dominated by unbeaten New Zealand (heard that one before?).

So Du Plessis made way for an iconic tenure by Nick Mallett in the hot seat … but not before the solace of seeing his closing charges run rare riot against David Wilson’s dazed Wallabies to avenge an earlier 32-20 defeat in Brisbane.

Interested to see the #Springboks team for Sat. Will AC start Lambie after 4 months of hardly playing?Or start Jantjies with Lambie on bench

Pivot De Beer had an individual field day in points-accumulation terms, adding 21 off the kicking tee for a total haul of 26 points to greatly aid the record blow-out.

This was another game against the Wallabies that came during a time of considerable instability for the Springboks, but ended up being a let-the-hair-down-a-little opportunity for the hosts.

It was a topsy-turvy old Test match in a Tri-Nations tournament the South Africans would finish bottom of, and spirits were hardly sky-high at kick-off due to four reverses in succession for Peter de Villiers’s charges.

Soon the Boks were being booed by the disenchanted Loftus faithful, too, as they leaked two tries in the first four minutes (Will Genia, James O’Connor) and were a bit later 21-7 down as well.

But give credit where due: they kept sufficient composure to hit back very earnestly, and eventually ran the Wallabies off their feet in the thin Highveld air after trailing 28-24 at the break.

Always liked the idea of Paf Lambie at 12. Many success has come from two decision makers/pivots in the past. #Springboks

Mind you, only a week later the Wallabies were back in bilateral ascendancy for the season as Kurtley Beale’s long, 79th-minute penalty strike in Bloemfontein earned them a 41-39 nail-biting triumph.

This was the maiden season of the reconstituted Rugby Championship, also featuring Argentina henceforth.

Although the Boks finished third of the quartet, ahead of only the Pumas, this was probably their best performance as they earned 5-1 try supremacy which said more about their dominance than the final score – only three conversions (by scrumhalf Ruan Pienaar) were managed by SA off the tee on that day.

They had been edged out 26-19 in Perth three weeks earlier, but here there was no doubting Bok urgency and mastery as player-of-the-match Bryan Habana led the charge with a hat-trick of tries. Even the much-maligned, supposedly non-attacking fullback Zane Kirchner got on the sheet.

The Test marked the first start at flyhalf for a then fresh-faced Johan Goosen, widely lauded for his ability to get the line moving crisply; is that perhaps something that should be kept in mind by Allister Coetzee as he weighs up his various options in the currently unsettled berth this weekend? – Sport24