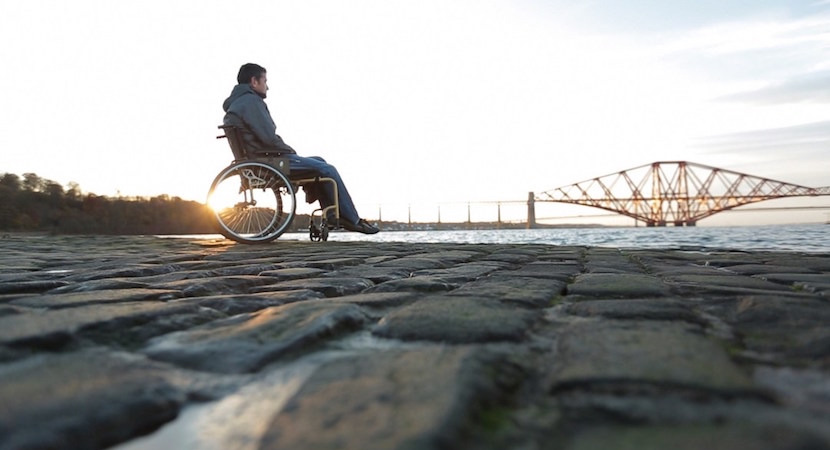 The moving tributes flowed thick and fast for Joost van der Westhuizen, reminding us just how great a player he was. Former Ireland and British and Irish Lions scrumhalf John Robbie said scoring tries was like a drug to Joost, and remembered when former Wales scrumhalf Rob Howley wrote in the match programme before Wales played South Africa in Cardiff in December 1996 that George Gregan was the best scrumhalf in the world. Robbie reckons van der Westhuizen would have seen that, and proceeded to score a hat-trick of tries as the Springboks won 37-20. He says Van der Westhuizen had the arrogance of a great player – he seemed to grow taller on the field, sending out the message that this was his stage. Robbie says Joost wasn’t just the greatest scrumhalf of all time; he was one of the greatest players of all time. Sport24’s Rob Houwing also pays tribute to Joost in this wonderful piece. – David O’Sullivan

More than Francois Pienaar, more than Joel Stransky … more even than Nelson Mandela.

I am still adamant in my belief that Joost van der Westhuizen — and in one notable additional instance Japie Mulder — influenced the outcome of the immortal 1995 World Cup final in South Africa’s favour above any others. (I repeat: the outcome of the final, as opposed to a stamp on the seismic, poignant Ellis Park occasion more broadly.)

The bearer of a bulldog, quintessentially competitive spirit throughout his decorated rugby career, which may even have eclipsed talent in explaining his success, Van der Westhuizen’s critically successful tackle on a rampaging Jonah Lomu early in the showpiece got confidence, arguably to the premier extent that afternoon, surging through the veins of his team-mates.

For much of the tournament to that point, Lomu had been the iconic, 20-year-old physical freak of it, a wing like none ever previously seen in rugby union for the power and explosiveness of his 120kg-plus frame at the time.

He had either trampled or rounded would-be defenders with almost contemptuous ease in the lead-up to the final, sporting seven tries from five prior matches.

Needless to say, the All Blacks tried to get Lomu into the action early on that sunny June 24 in Johannesburg, bringing him roaring through the midfield for what looked like being an unstoppable break.

Most scrumhalves would have been pinged haplessly backward, pinball-like, but the Bok No 9 was at least blessed with superior height and lean muscularity in the berth to most…not to mention an already well-developed, known spirit of no-surrender at age 24.

Lomu clatterered into an unflinching Van der Westhuizen at near full pace, having already eluded both Stransky and Pienaar, but would get no further, as the hell-bent tackler, going in low in the old-fashioned way, instantly sent out the clearest of messages: you can be stopped; you will be stopped today.

Joost Van Der Westhuizen. A guy I feared as an opponent, respected hugely as a player and will miss deeply as a very courageous human being.

Twice more in the match, the halfback (to borrow New Zealand parlance, albeit that there was never much that seemed “half” about Joost) executed halting tackles on Lomu, once in a typically gutsy second bite at the cherry where Van der Westhuizen tracked back with intent and swivelled cleverly before grabbing the giant in the waist area and somehow bringing him to the Highveld turf.

The most demonstrative hit on Lomu that day, it is true, was the property of chunky centre Japie Mulder, who steamed in, sized the ball-carrier up and then sent him skidding over the left touchline – even doing a bit of cheeky push-and-shove “afters” on his foe for good measure.

Yet Van der Westhuizen will forever boast the best Bok tackle strike rate, as it were, on Lomu in the 1995 final … and he engineered them all, true to his make-up, despite the slight handicap of a damaged rib from the semi-final against France.

It is ironic and sad that both magnificent, standout gladiators of that tournament, 22 years ago, are no longer in the midst of rugby’s brotherhood: Lomu lost his own lengthy battle with health demons in late 2015, aged 40, whilst on Monday Van der Westhuizen, after several plucky years of pronounced bodily frailty, finally succumbed to the creeping ravages of motor neurone disease at 45.

For one so finely sculpted in physique during his playing prime, there was a certain additional discomfort to seeing him looking so skeletal and gaunt, a slowly-withering stick in a T-shirt, whenever he made public appearances in a wheelchair.

Not long before Lomu preceded him to a cruelly premature passing, the All Black made an emotion-charged, documentary-filmed trip here to mark 20 years since RWC ’95.

RIP Joost van der Westhuizen, taken by the infernal motor neurone disease at 45. Not a thorn, but a dagger in English sides. Brilliant man.

In Back to South Africa, Lomu visits Van der Westhuizen and they share recollections of their rugby union heydays. He says to the scrumhalf: “The most satisfying thing is that I can call you a friend…I love you, my brother.”

It is some of the most moving footage you could possibly see in sport, each man mightily aware that his hold on life was getting more and more tenuous – and perhaps fortified, unified by that very fact.

In an automatic, statistical signal of his lofty place in the Springbok hall of fame, Joost Heystek van der Westhuizen – who played his franchise and provincial rugby all for one team, the Loftus-based Bulls – earned 89 appearances in the green and gold jersey between 1993 and 2003.

That makes him the sixth most-capped Bok of all time and most prolific scrumhalf for the country, just beating off Ruan Pienaar (88, though almost half as a substitute and some in other positions) as well as Fourie du Preez on 76.

He is also still the Boks’ second-from-top try-scorer with 38; he was a wonderful sniper around the fringes and seemed to make an art-form of dotting down tigerishly just inside the corner flag, sometimes even with an armada of tacklers on his back and side. 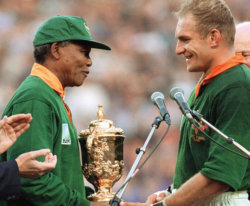 Van der Westhuizen also had an educated tactical boot and deft grubber when on song, and another major string to his bow was his utterly dogged defensive commitment; it certainly wasn’t limited to his Lomu-thwarting heroics in the World Cup final of 1995.

He would clatter fearlessly into locks, props or blindside flank bruisers with all the same gusto he would reserve for considerably lighter-weight backline opponents.

Like many sporting superstars, he was not entirely without fault: some said he was too obviously left-footed, and he was prone at times to irritatingly delaying service to his backline from the base of rucks while he pointed animatedly or barked instructions.

His irresistible solo tendencies would take him down counter-productive cul-de-sacs from time to time and, for the little it matters, I would place Van der Westhuizen a whisker behind Du Preez – perhaps the more rounded maestro and game manager? — in the pantheon of modern Bok legends at No 9.

That said, he was usually pretty good at shielding rookie flyhalves outside him if peril lurked for them, albeit that in one unforgettable instance at his third and last World Cup, in 2003, he sold young Derick Hougaard right down the river with an unintended bobbling, sluggish pass that made the pivot a sitting duck for a wince-inducing tackle from Samoa’s deadly Brian “The Chiropractor” Lima.

He lost some of his lethal acceleration off the mark in his later career as the ravages of serious injury, including a cruciate knee ligament rupture, took increasing hold.

While unlikely to have been every player’s cup of tea, Van der Westhuizen was also a credible, lead-by-example Bok captain on several occasions, including at the 1999 World Cup where he guided them to third place, including triumph in the bronze playoff against the arch-rival All Blacks.

Although charismatic then-coach Nick Mallett had handed him that chore, he later confessed they seldom saw eye to eye. 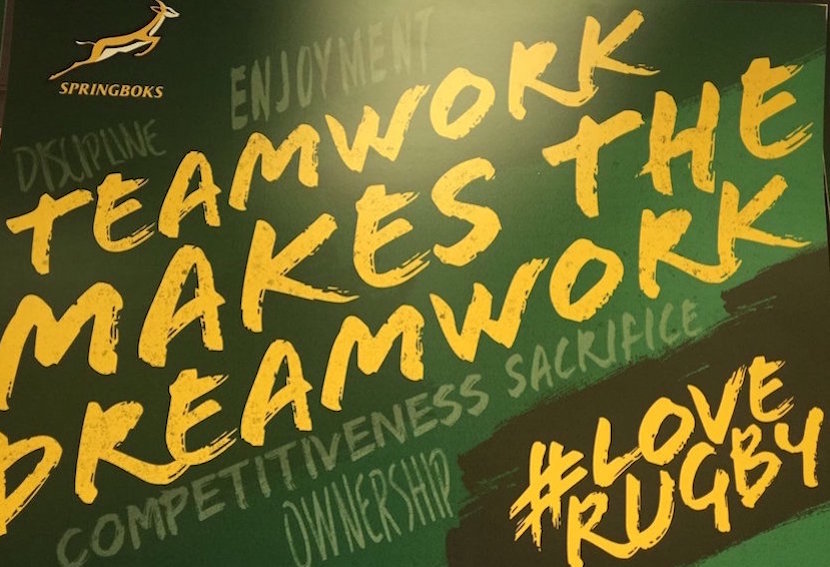 “(Mallett) selected me as captain to be used as a dummy when he realised he’d made a mistake by axing Gary Teichmann … the best way to take some heat off was to select an Afrikaans-speaking captain to keep supporters happy,” Van der Westhuizen contended several years later.

I was fortunate on at least two occasions, in the time of SA Sports Illustrated magazine and its sometimes 10-page exhaustive monthly interview with a specific personality, to perform the task with Van der Westhuizen.

The now-World Rugby Hall of Fame member gave better value than most…if mainly because, if you could deftly get him fired up with your line of questioning, a certain mouthy belligerence and assertiveness enveloped him and he would sing like the proverbial canary.

There was, in his younger days, a boastfulness, a bravado and occasional, slightly faux modesty in what he would say.

If he dispensed praise to a scrumhalf rival, for example, it might be noticeably qualified, and only indicative of his inbuilt, stubborn determination not to yield personally, to anybody or anything.

You could almost see him bristle when I asked him, during a period when he was sidelined and Werner Swanepoel made excellent strides in a scrumhalf stand-in capacity, how that felt to him: “He’s good, yes. I was very happy for the kid…I didn’t even think of it, to be honest, because I know myself: I’m a fighter and I’ll get back.

“Looking at Werner’s own game, you have to say that if your forwards play like they did, you could put any player in that position and he’d perform.”

A bit of a nod…but also a reminder of precisely who Van der Westhuizen considered boss.

Not an automatic advocate of the demands and process of sports and societal transformation during the first decade or so of democracy, Van der Westhuizen was nevertheless a staunch patriot; he told me he would never “pack for Perth”, at a time when the phenomenon was popular.

“I am a boertjie…landvas, as they say in Afrikaans. You’ll never get Africa out of me.”

Inevitably and sometimes detrimentally, Van der Westhuizen was seduced by celebrity lifestyle as he and his singer wife Amor Vittone were dubbed the “Pretoria Posh and Becks” by some.

They separated, amidst well-publicised acrimony including Van der Westhuizen’s involvement – first denied, then confessed – in a seedy sex and drugs video scandal with a stripper which cost him his job as a television rugby pundit and commentator.

The discovery of his serious illness mellowed and matured the player, quickly and seemingly enormously.

Setting up the J9 Foundation, he became a dedicated, industrious crusader – despite his painfully obvious, gradual own decline in strength – for awareness and funding of MND, including auctioning off much of his treasured personal memorabilia for cash-raising purposes.

He fought the disease with all, and quite probably more, of the courage that defined his rugby days, almost certainly winning over emphatically people who might have been detractors to varying degrees in the years preceding the condition.

A rare gentleness and humanity was evident in many of his Twitter posts as his days became numbered.

In rugby and then a much less welcome battle for him, Joost van der Westhuizen was simply as tough as they come. – Sport24