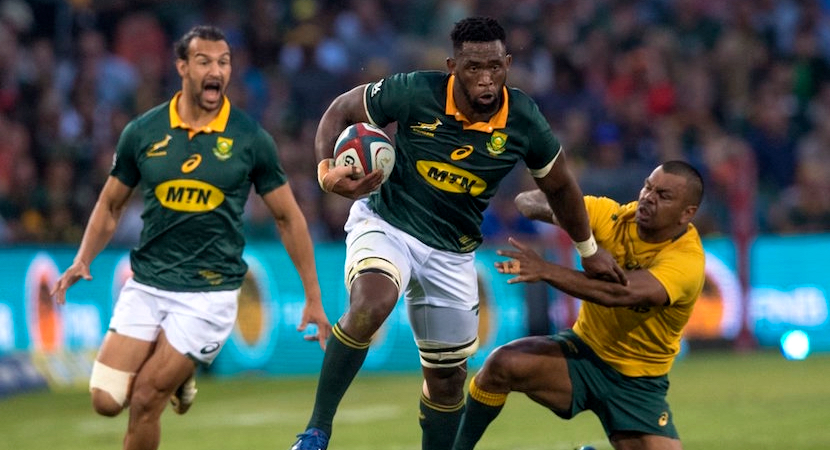 JOHANNESBURG — After being touted as a future Springbok captain for a couple of seasons, Siya Kolisi finally becomes the first black player to take charge of the national team. He will become the 61st Springbok captain, after proving he is an effective leader and motivator at the helm of the Stormers. Many critics felt Kolisi should have been given the captaincy last season, but coach Allister Coetzee opted for Kolisi’s Super Rugby teammate Eben Etzebeth to take over the captain’s armband when Warren Whiteley was injured. Erasmus has only appointed Kolisi as captain for the three-Test series against England, intimating that things could change if and when the injured Whiteley and Etzebeth return to the squad. He’s named Pieter-Steph du Toit as the skipper for the one-off Test against Wales in Washington. It’s not clear why Kolisi can’t do the job against Wales. Erasmus mentioned that Du Toit was better suited to the style of play he is planning for the Wales Test. He could be sending a second-strength side to Washington and resting Kolisi for the tougher assignment against England. Erasmus knows Kolisi well, having coached the Stormers loose forward since he was 18 years old playing at the WP Academy. – David O’Sullivan

Siya Kolisi will lead the Springboks against England in the forthcoming Castle Lager Incoming Series while Pieter Steph-du Toit has been entrusted with the captaincy for Saturday’s historic Test in Washington against Wales.

Rassie Erasmus, the SA Rugby Director of Rugby, confirmed the two appointments on Monday morning at a media conference at the team hotel in Johannesburg.

Erasmus, who took over the coaching reins of the Springboks after his appointment in April, also confirmed the Springboks’ 26 man travelling squad for the Welsh encounter in Washington.

The squad members not involved in the Welsh match will stay behind in Johannesburg to continue with their preparations for the coming international season.

Erasmus congratulated Kolisi and Du Toit on their respective appointments. Both men will captain the Springboks for the first time.

“It’s a huge honour to captain the Springboks and Siya and Pieter-Steph are two honest, hardworking men who enjoy the respect of their fellow players,” said Erasmus.

“I believe both of them will do a good job as captains. My philosophy is that each player must take responsibility for his position and must therefore work extremely hard with that one goal in mind – to make the Springboks successful again,” added Erasmus.

Born in Zwide township near Port Elizabeth, loose forward Kolisi is also the DHL Stormers captain and has played in 28 Tests since making his debut at age 22 against Scotland in Nelspruit on 15 June 2013. He has four Test tries to his name.

Du Toit made his debut as a 21-year-old on 9 November 2013 against Wales in Cardiff. He is equally at home as lock and as loose forward and has played in 32 Test for the Springboks, 21 as lock, 10 times as flank and once as No 8.

All except two of the 43 players reported for Springbok duty on Sunday in Johannesburg, where the squad immediately got their preparations underway for this weekend’s Test against Wales. The experienced duo of Frans Steyn (centre) and Bismarck du Plessis (hooker) will join the Springbok squad next Monday following the completion of their French club rugby commitments.

Erasmus will announce his starting line-up for the Welsh match on Wednesday, just a few hours before the 26-man squad fly out to Washington.