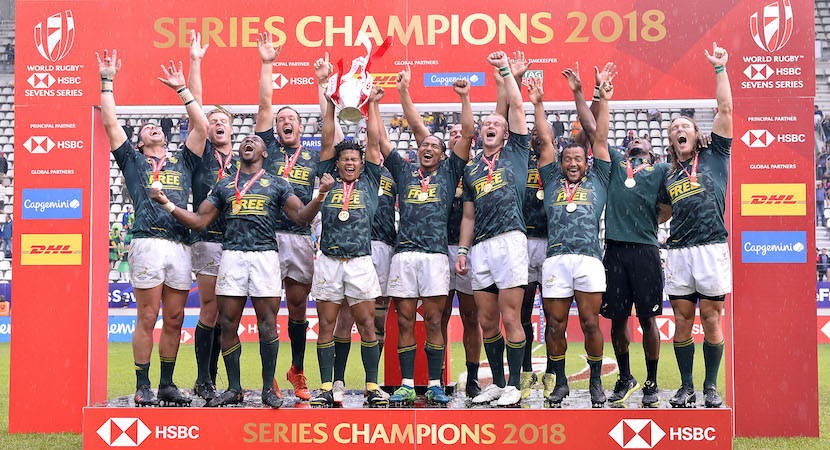 JOHANNESBURG — Never before in the history of the World Sevens Series has the title been decided in the final game of the final tournament. Going into the Paris tournament, Fiji had a 7-point gap over South Africa in the overall standings. For South Africa to retain their world crown they had to win the Paris event and rely on Fiji finishing 5th or worse. It was an unlikely scenario, as Fiji had won the previous four tournaments and South Africa had injury problems which had robbed them of their more experienced players. But the tournament was thrown wide open when Fiji lost their quarter-final against England. The Blitzboks were one kick away from disaster in their quarterfinal against Spain, when the unfancied Spaniards scored a try to draw level at 10-all on the final hooter. But they failed to convert, forcing the game into extra time. The team’s renowned discipline and incisive first-time tackles got them through the next two encounters against New Zealand in the semi-final and England in the final for a famous win. Consistency was a hallmark of the Blitzboks’ success. In all 10 tournaments this season they qualified for the Cup semi-finals. They won twice (Dubai and Paris), and were losing finalists three times (Sydney, Hamilton and London). – David O’Sullivan

The HSBC World Rugby Seven’s Series title was decided in dramatic fashion after South Africa beat England 24-14 in the final of the HSBC Paris Sevens to clinch the gold medal and retain their series title.

In one of the most competitive years in the history of the series, the title went down to the very last match as South Africa required a tournament victory to overtake Fiji in the series standings.

South Africa finished the series on top with 182 points, followed by Fiji who took silver with 180 points and New Zealand in third on 150 positions after claiming the bronze medal in Paris with a 38-5 victory over Canada in the third-place play-off.

Last year’s series champions South Africa edged past Spain 15-10 in the quarter-final with a try in the fifth minute of overtime by Justin Deduld, after the scores were tied 10-10 at the end of regular time. The South African Blitzboks then found their stride in the semi-final with a comprehensive 24-12 victory over New Zealand thanks to a pair of tries from the impressive 23-year-old Dewald Human who only made his debut two months ago in Hong Kong.

Human was again in try scoring form in the final and was delighted to be voted Player of the Final: “It’s been a fantastic experience here in Paris. I backed myself and just enjoyed every minute on the field. We stuck to the game plan and are very happy with the win.”

South Africa captain Philip Snyman added: “We wanted to go out and play some fantastic rugby and focus on what we could control. The guys played phenomenal rugby and all credit to the team. We just did the simple stuff and played with smiles on our faces today. It’s an amazing feeling representing such an amazing country and the people back home never stopped believing in us and supporting us.”

What a lekker weekend!!! Well done to our @Blitzboks for another series win!!!

Fiji missed the chance to secure the title earlier in the day as they were defeated 19-17 by a spirited England team in a breath-taking quarter-final. England captain Tom Mitchell finished off a 26 pass move to score in the dying seconds of the match and bring an end of Fiji’s recent dominance which has seen them win the previous four rounds of the series.

Fiji recovered to beat Ireland 38-5 and USA 28-7 to finish fifth in Paris and put the pressure on South Africa going in to the final but ultimately it was not enough and Fijians were forced to settle for series silver, despite winning five of the ten rounds.

England produced another powerful performance in the semi-final with a convincing 26-12 victory over Canada to reach their first final of the 2017-18 series, but they were unable to cope with the Blitzboks in the final as the men from South Africa ran out winners in front of a noisy Paris crowd.

Invitational team Ireland’s fine run of form came to an end as they were beaten 19-5 by Canada in the quarter-finals but following their bronze medal performance in London last week the Irish have shown enough promise over the past two rounds to raise expectations of a bright future in rugby sevens.

Argentina won the Challenge Trophy, awarded to the team finishing in ninth position, after overcoming Wales 33-26.

All attention now turns to the Rugby World Cup Sevens 2018 in San Francisco from 20-22 July, where 24 men’s and 16 women’s teams will battle it out to become world champions over three days of exciting action. Over 72,000 tickets have already been sold.