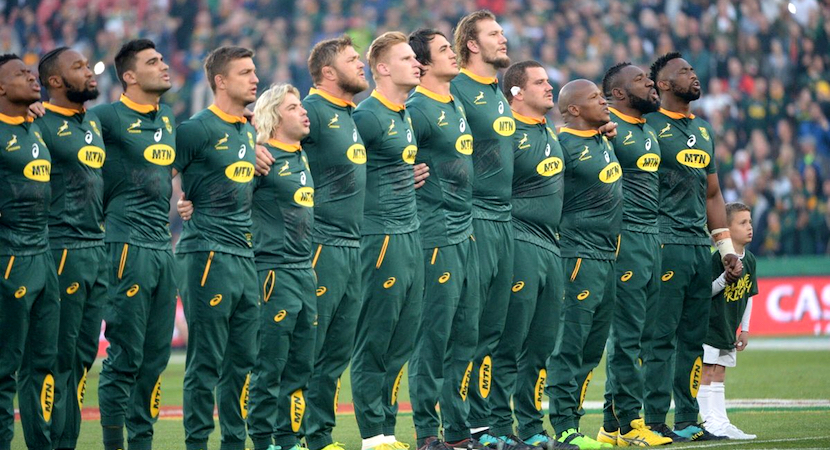 JOHANNESBURG — Saturday’s 2nd Test between South Africa and England in Bloemfontein might have lacked the try-scoring drama of the 1st Test in Johannesburg, but it didn’t lack intensity and emotion. Feelings were high from the start with Beast Mtawarira walking on to tumultuous acclaim, carrying his children, as he marked his 100th Test cap. There was plenty of physical needle resulting in scuffles between the players, none of which amounted to much more than handbags at 10 paces and the odd slap when the ref wasn’t watching. The Springbok victory, clinching the series and dooming Eddie Jones’s men to a 6th successive defeat (7th defeat if you count the match against the Barbarians), has gutted the visitors. Scrumhalf Ben Youngs gave a petulantly curt interview with Sky Sports for which he later apologised, citing the emotion and disappointment of the defeat as reasons for his unprofessional behaviour. This wasn’t a great Test match, but it’s a significant victory for Rassie Erasmus’s young side. Once again, they had to bounce back from an unhealthy deficit to clinch the win with man-of-the-match Duane Vermeulen leading the charge. The teams now head off to Cape Town with England playing for pride and South Africa aiming for a series whitewash. There’s enough passion in this series to ensure the Newlands Test will be a thriller. – David O’Sullivan

Tendai ‘Beast’ Mtawarira celebrated victory in his 100th Test appearance for the Springboks as the team clinched the Castle Lager Incoming Series over England at the Toyota Stadium in Bloemfontein on Saturday.

South Africa overturned a 12-0 deficit to win 23-12 – holding England scoreless from the 13th minute to the final whistle – to follow on their come-from-behind 42-39 triumph in the first Test.

The win completed an unforgettable week, said Mtawarira, who had received a surprise phone call from state president, Mr Cyril Ramaphosa, on Friday.

“When I realised who it was I got very formal, very quickly,” said Mtawarira. “He thanked me for what I had done and for inspiring South Africans – I was just really surprised that he knew who I was.

Also read: How rugby’s new dawn made me happy to be South African all over again – Ben Karpinski

“It has been a really great night. I’d like to thank all of South Africa for supporting me throughout my career. I’m very happy.”

Despite the victory, Director of Rugby, Rassie Erasmus, said that there was still much work to do.

“One positive was being down only by 12 points rather than 24 and we showed good composure to come back quicker this week,” he said.

Well done Bokke. Moved up from 7 th in World rankings to 3rd after beating the English today #springboks

“The guys realised where the mistakes were and we showed that it doesn’t matter how far down we are, we can come back.

“But we made a lot of mistakes; there were bad penalties and a lot of things that we did wrong but we have the character to come back.”

Springbok captain Siya Kolisi attributed the comeback to the training regime: “The coaches want effort from us and they said they weren’t too concerned about the mistakes because as long as the effort was there and we kept on fighting it would come together.

Erasmus said that he still had targets for the series: “We want to win it 3-0 and maybe put different guys under different pressures in different circumstances, and we will try a few things but after the series win we are breathing a bit easier.”

England coach Eddie Jones said that his team wanted to “get our pride back” in the third Test.

He said that they had won back-to-back Six Nations titles, equalled the world record for Test wins and won a series, 3-0, in Australia and that they would stick together to turn things around.

But Jones also noted the improvement in South Africa: “I think the selection has been good; they obviously have a very clear plan about how they want to play and they are executing it well. It’s traditional Springbok rugby.

“They have some good young players who are developing well and there are plenty more around as well – how good they can become only time will tell,” said Jones.

The third and final Test in the Castle Lager Incoming Series is in Cape Town on Saturday.