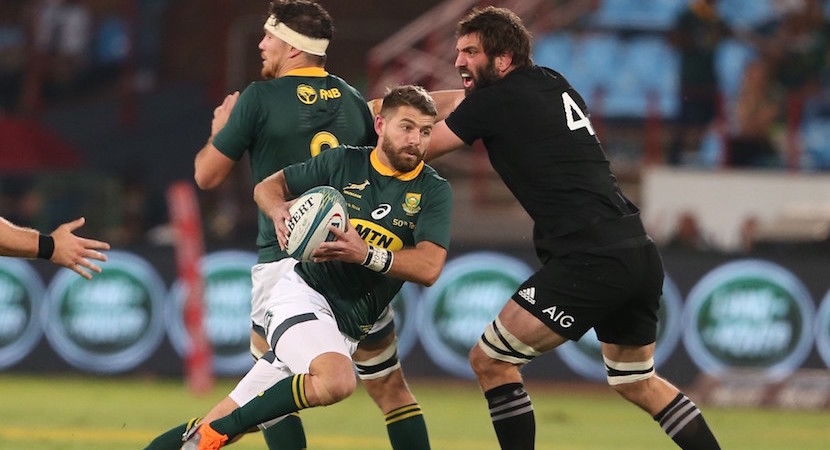 LONDON — The South African rugby team is significantly bolstered by the addition of six experienced players to the squad for Saturday’s Test match against France at Stade de France. Not that Ivan van Zyl and Damian Willemse were poor performers in the Test against England, but the experience of Faf de Klerk and Willie le Roux will surely see them make the starting line-up. Did it seem churlish of Sale Sharks not to release De Klerk for Twickenham, given that they didn’t need him for club duty on Saturday? The little scrummie was watching the Test from the stands. Franco Mostert might feature in the match 23 after Eben Etzebeth hobbled off on Saturday with a foot injury. The man being singled out for severe criticism by the English media is Malcolm Marx. Now that the dust is settling ever so slightly on the Owen Farrell shoulder charge (or tackle, depending on your point of view), the media glare is on Marx whose three overcooked lineout throws turned Bok attacks into defence. Monday night’s Evening Standard crowed “Lucky England have Marx to thank for throwing away South Africa’s chances”. None of their rugby writers or columnists felt that England were worthy winners, but all are united in their conclusion that the Boks were their own worst enemies. – David O’Sullivan

De Klerk (scrumhalf) linked up with the South African squad on Monday after Le Roux (fullback), Louw (flank), Koch (prop), Mostert (lock) and Kolbe (utility back) met up with their team mates on Sunday evening in French capital.

The nippy scrumhalf and the other European-based Springboks were not considered for the past weekend’s match against England at Twickenham because that match fell outside the official international window.

“It’s good to welcome Faf, Willie, Cheslin and the others back into the squad,” said Rassie Erasmus, Director of Rugby.

“They bring along some valuable experience and knowledge of the European conditions and we are looking forward to working with them again. All of them will be available for selection for this weekend.”

According to Erasmus, there is a good chance that Eben Etzebeth will be considered for Saturday’s Test after the big lock sustained a foot injury against England at Twickenham.

“The injury is not as bad as we initially thought and we will give Eben time until Tuesday to prove his fitness,” said Erasmus.

@Springboks coach Rassie Erasmus is the ultimate troll. Cant think he is serious but he is making a point here. Video was sent to me. Shows how ludicrous the decision was again… if coaches have to coach that way….
And the silence from @worldrugby is deafening pic.twitter.com/Mm20KfcKsP

Siya Kolisi and his team mates started their preparations for the French encounter on Monday morning. Erasmus is set announce the Springbok match 23 for the French Test on Thursday.

The match against France kicks off at 22h05 (SA time) in the imposing Stade de France. The Springboks’ end-of-year tour to the northern hemisphere also includes Tests against Scotland in Edinburgh and Wales in Cardiff.