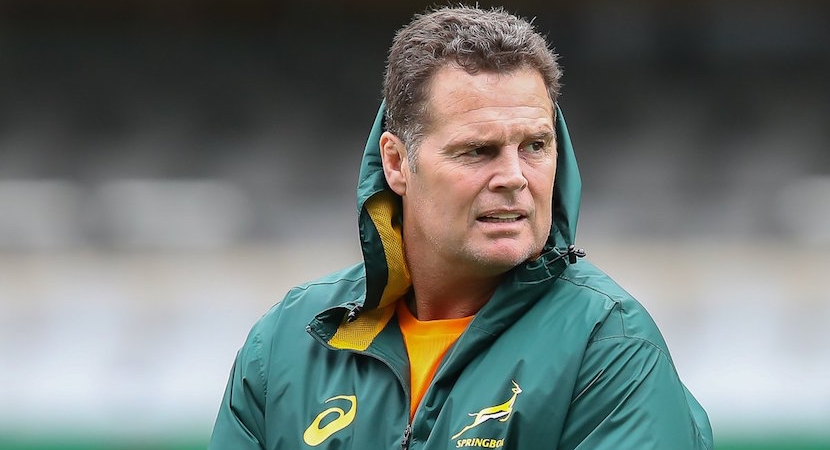 JOHANNESBURG — If Bok coach Rassie Erasmus hasn’t worked out his World Cup squad by now and needs to have another look at his options, he’s got four Test matches in which to make up his mind. SA Rugby has announced the Springboks’ international fixture list for 2019, and, as expected, it includes a shortened Rugby Championship. They’ll face the Wallabies in Johannesburg, the All Blacks in Wellington and the Pumas at a yet-to-be-decided venue in Argentina. The schedule also includes a 4th Test match, a home international against Argentina which is not part of the Rugby Championship. These matches take place in July and August. The Boks then have a break of 5 weeks before the huge match in the World Cup on 21 September against the All Blacks at the International Stadium Yokohama. There’s no incoming tour and Super Rugby runs uninterrupted  from February until the first week of July. In a World Cup year, the Rugby Championship seems hardly the trophy worth playing for. Keeping form and keeping fit will be uppermost in players’ minds. – David O’Sullivan

The Springboks will play their only two home Tests in 2019 in Johannesburg and Pretoria, with the opening round of a shortened Castle Lager Rugby Championship taking place on Saturday, 20 July at Emirates Airline Park against Australia, while an additional Test against Argentina on Saturday, 17 August will be played at Loftus Versfeld.

Due to next year’s Rugby World Cup in Japan, South Africa, Argentina, Australia and New Zealand are scheduled to play in a condensed Caste Lager Rugby Championship. The clash against the Pumas in Pretoria does not form part of the competition and takes place on the same day as a second Bledisloe Cup clash between the Wallabies and All Blacks.

Vodacom Super Rugby kicks off on the weekend of 16 February and will run interrupted until the final on Saturday 6 July, which means no Castle Lager Incoming Tour will take place in the RWC year.

Following their home match against the Wallabies on the Highveld, the Springboks will travel to New Zealand for the big encounter against the All Blacks on 27 July at the Westpac Stadium in Wellington, the scene of the Boks’ outstanding triumph over the Kiwis in September this year.

Two weeks later, on 10 August, the Springboks play in their second away game when they take on the Pumas in Argentina (venue TBC) and the two teams will then meet each other again one week later in Pretoria.

Jurie Roux, the CEO of SA Rugby, said he is delighted that Springbok fans will now be able to see their team in two home Tests next year.

“The extra match against Argentina in Pretoria means Bok fans will have a fantastic opportunity to see Siya Kolisi and his Springbok team in action in a second home international,” said Roux.

“The match against the Pumas will also give Rassie Erasmus (Director of Rugby) a final opportunity on home soil to prepare the Springboks before the announcement of the final squad for the Rugby World Cup in Japan.”

Kick-off times and ticketing details for the Johannesburg and Pretoria Tests will be confirmed next year.

The Springboks’ confirmed Test matches for 2019

The Springboks’ 2019 Rugby World Cup Group B match schedule is (with local and SA times):