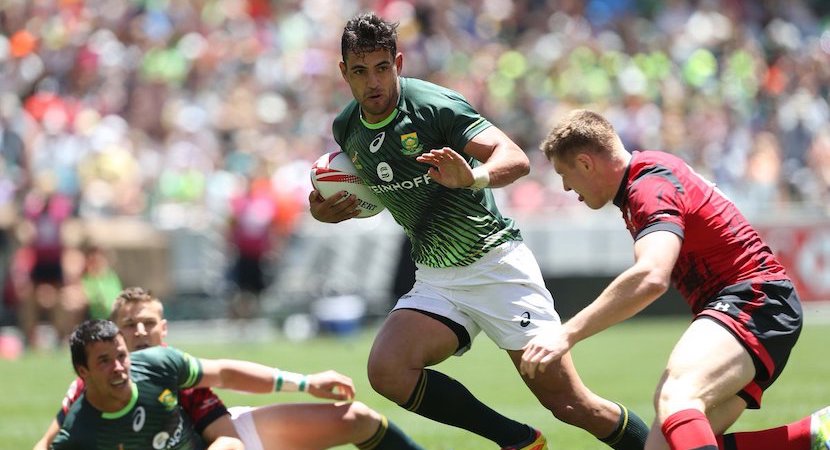 JOHANNESBURG — It’s early days yet in the 2018/19 World Sevens Series, and after two tournaments South Africa’s Blitzboks are sitting in an unfamiliar and uncomfortable position of 5th place, behind surprise log leaders USA, New Zealand, Fiji and England. The top four teams at the end of the competition qualify automatically for the 2020 Olympic Games in Tokyo. The South Africans are one point behind England, and in need of a more convincing performance than they turned in at the Dubai and Cape Town tournaments last year. The team could only manage 6th place in Dubai which was one of the team’s worst performances in the Arabian country, followed by 3rd place in Cape Town. Coach Neil Powell’s team for the Australia and New Zealand tournaments once again contains a mix of youth and experience, with the most welcome addition to the team being that of Chris Dry, a veteran of 64 tournaments, who has been working slowly but surely to repair an injured knee. He eased back into action by playing in Dubai for the South African Academy side in November, and has been given the green light to step up into the main competition. As happened last year when the Blitzboks lost Kwagga Smith and Seabelo Senatla to Super Rugby, they will be without Rosko Specman who will be turning out in the Bulls’ Captain America Super Hero strip this season. – David O’Sullivan

The experienced Chris Dry will return to the Springbok Sevens squad for the first time in more than a year after being named in the tour group for the HSBC World Rugby Sevens Series tournaments in New Zealand and Australia.

Dry last played for the defending World Series champions in Cape Town in December 2017. His return to the side for his 65th tournament is just reward for the months of rehabilitation since he was ruled out with a knee injury 14 months ago. He takes over from Ryan Oosthuizen in the forwards.

There are two changes amongst the backs to the side that finished third at the HSBC Cape Town Sevens in December 2018. Stedman Gans, who last played in London in June last year, will replace injured Muller du Plessis and Selvyn Davids, the 13th player in Cape Town, comes into the match day squad for Rosko Specman, who has joined the Vodacom Bulls.

Philip Snyman will again lead the side after missing the second day of action in Cape Town with a shoulder niggle, while Justin Geduld and Werner Kok, who underwent minor surgery for knee and facial injuries last month, have also being declared fit to play in Australasia.

Mfundo Ndhlovu and Cecil Afrika were not considered due to injury.

The inclusion of Kyle Brown, for his 68th World Series tournament, will see the former team captain equal the record for tournament appearances in the Blitzboks jersey, held by Frankie Horne.

Springbok Sevens coach Neil Powell also named JC Pretorius as the official reserve player, with the former SA Schools flanker set for his Blitzboks debut, should he take to the field.

“We had a slower start than usual to the season, so the next two tournaments will be important for us to keep on improving on our performance”,” said Powell.

“It is comforting to have 10 players from our last tournament available for selection again as we always look for continuity and consistency. However, the three new players, Chris, Stedman and JC, have been training with us since late last year.

“All three came through training well, so they will not have a problem slotting into tournament mode. We had a good couple of weeks since the Christmas break and everyone is keen to deliver a performance all can be proud of.”

On the inclusion of Dry, Powell said: “I am pleased to have Chris back as he will contribute valuable experience and leadership to the squad. He worked really hard to get back in the team and to be able to play at the required level. His determination is commendable and will add to the resilience of the squad, no doubt.”

The silky running of the 21-year-old Gans will aid the Blitzboks attack, while Davids showed on the second day in Cape Town that he is ready for a more permanent role in the squad.

The HSBC New Zealand Sevens will take place on 26 and 27 January in the FMG Stadium in Waikato, while the HSBC Sydney Sevens tournament is scheduled for 2 and 3 February at Spotless Stadium.

The Springbok Sevens squad for the HSBC New Zealand Sevens:

The Blitzboks schedule for the first day is (SA times, all matches on SuperSport):

The pools for the HSBC New Zealand Sevens: