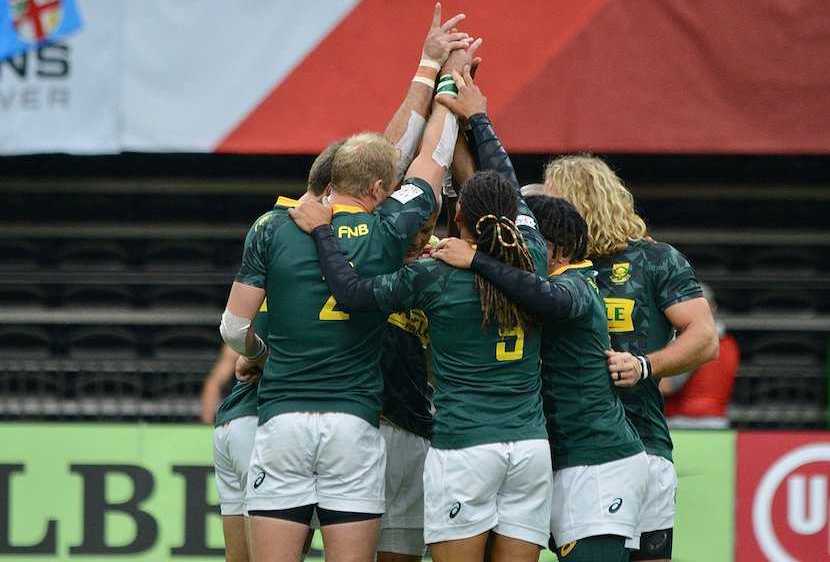 If the Blitzboks were poor on the second day of the London Sevens at Twickenham, England were worse. And that was important as the South Africans were out to confirm a fourth place finish at the 2018/19 World Sevens Series and guarantee automatic qualification for the Tokyo Olympics. At the end of day one, the Blitzboks were rampant having put 40 points or more past their group stage opponents. But on day two, they turned in one of their worst performances and were completely dominated by Australia in the Cup quarterfinal. They then, maddingly, lost to New Zealand in the last seconds of their knockout match. But England had a torrid home tournament, failing to qualify for the Cup competition and then losing the playoff for 13th place against Japan to secure just 2 points from the tournament. South Africa, in 4th place on the standings, finished joint 7th in London but have a 22-point advantage over 5th-placed England which means they can’t be overtaken in the final tournament of the season in Paris. Olympics, here we come! – David O’Sullivan

Blitzboks struggle in London, but qualify for Tokyo 2020

There was disappointment and tempered elation in the Springbok Sevens camp in London, where they lost both their matches but still did enough to secure automatic qualification to the Olympic Games in Tokyo next year, thereby ticking an important box for the 2018/19 season.

The defeats to Australia, in the Cup quarter-final, and New Zealand meant the Blitzboks finished the HSBC London Sevens in a disappointing joint-seventh place, but they secured the fourth spot in the 2018/19 HSBC World Rugby Sevens Series after England faltered in their home tournament.

The top four teams in the World Series were guaranteed automatic passage to the Olympic Games in the Japanese capital in 2020, and the USA, Fiji, New Zealand and South Africa have booked those slots after the weekend’s action.

Although they struggled in London, finishing in the top four a highlight for Blitzbok coach Neil Powell, who was disappointed following the Cup quarter-final defeat by 29-22 against Australia. In their second match of the day, New Zealand won by 21-17 after the Blitzboks conceded a try after the final hooter.

“One of our main aims at the start of the season was to make sure we qualify in the top four in order to get that automatic qualification for the Tokyo 2020 Olympic Games,” said Powell.

“We ticked that box and we are grateful and pleased with that. It does ease the disappointment of our performances here on the second day a bit. Our match against Australia was probably our worst all season as we simply didn’t play near to what we are capable of and supposed to.”

The Australians, who later contested the Cup final against Fiji, scored tries in quick succession in the first and second halves, leaving South Africa to play catch-up rugby all along.

“Maybe we had it too easy on the first day,” lamented Powell.

“The younger players need to learn that you cannot bank on good performances on day one and then not show up the next. We were just not good enough in that match and that was very disappointing.”

Powell was pleased with the effort against New Zealand though: “At least we showed some effort in that match and I will never fault that. The result was unfortunate, but we showed some urgency in the match.”

The HSBC London Sevens was won by Fiji.

Next weekend, the World Series will conclude in Paris, where the Blitzboks will be defending their tournament title.