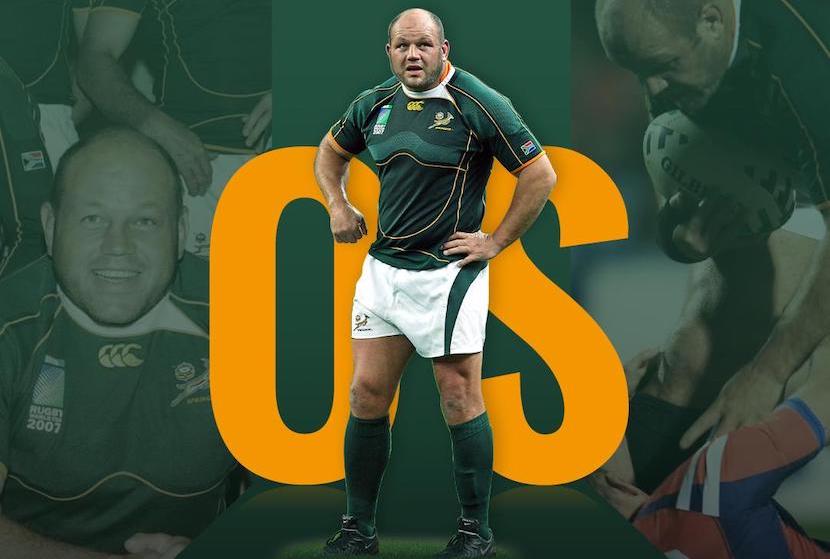 There aren’t many rugby players more deserving of the often overplayed accolade of “legend” than Os du Randt. Very few rugby players have the honour of winning two Rugby World Cup medals, and Os is the only South African player to have achieved this rare feat. (I’m careful to add the word “player” to avoid someone pointing out that eye specialist Dr Sherylle Calder was a member of the South African and England World Cup squads that won the World Cup in 2007 and 2003 respectively. That’s also two World Cup wins for a South African.) All the accolades for Os are detailed in the media release below from SA Rugby, but nothing is said about his wonderful humility. I worked with Os on SABC Sport covering the 2011 Rugby World Cup when he joined our panel of experts. He regularly appeared alongside his good friend and former Free State and Springbok teammate Naka Drotske. The two of them would drive up together from Bloemfontein early in the morning to be on set for the afternoon or evening games. For a big man who struck fear into the hearts of his opponents because of his robust and powerful play, he had his own demon to conquer when faced with a TV camera. In the first few broadcasts, he sweated so profusely from nerves that a makeup lady would towel him down between breaks. He would swing in his chair so much that the floor manager tried using gaffer tape to hold the chair in one position. The tape was no match for Os’s powerful legs and he was soon swinging back and forth as the tape was ripped free. He quickly got used to live TV and his rugby knowledge shone. His analysis was superb. He understood the mysteries of the scrum so fundamentally and was able to explain what was going on deep within that mass of heaving bodies. His insights added so much to the broadcast. He knew what was going on, he had experienced it all. Twice. He was very matter-of-fact about his own achievements, seemingly unaware of the magnitude of what he had done as a player. His love for the game was obvious. Os du Randt is a true legend and so deserving off his induction in the World Rugby Hall of Fame. – David O’Sullivan

World Rugby has announced that Du Randt will be joined by the New Zealand duo of Richie McCaw and Graham Henry, as well as Shiggy Konno (Japan), Peter Fatialofa (Samoa) and Diego Ormaechea (Uruguay).

“This is a wonderful way to recognise the career of one of the best Springboks to ever don the green and gold,” said Mr Mark Alexander, President of SA Rugby.

“He is one of only a handful of players to have lifted the Webb Ellis Cup twice, and the fact that he did it with an interval of 12 years between victories, speaks volumes about the man and his career.

“Os was revered as one of the best props of his generation and he anchored many scrums, not only for the Springboks, but also in the colours of the Cheetahs – whom he helped win their first Currie Cup title in 29 years in 2005 – as well as the Cats and Bulls.

Rassie Erasmus, Director of Rugby and a former team-mate of Du Randt, both with the Boks and the Cheetahs, said he first met the big front ranker fresh out of high school.

“We were in the same battalion in the army and what is the most amazing thing about Os, is that he has not changed one bit over the years, despite doing all the great things he’s done,” said Erasmus.

“We played together for the Boks, Cheetahs and the Cats, I coached him when he came back from retirement, then he won the Rugby World Cup for a second time – if there is one legend in South African rugby history, it’s him. What he’s achieved is simply incredible.”

The World Rugby Hall of Fame presented by Tudor recognises those who have made an outstanding contribution to the game of rugby throughout their careers, while also demonstrating rugby’s character-building values of integrity, passion, solidarity, discipline and respect.

The six inductees will be honoured at the World Rugby Awards at The Prince Park Tower in Tokyo during a night dedicated to the game, with important members of the rugby family.

While Fatialofa and Konno will be inducted posthumously, McCaw, Henry and Ormaechea will attend the prestigious event, which will celebrate their careers and contributions to the game. These six inductees bring the total in the Hall of Fame to 148 since it began in 2006.

World Rugby Chairman and Hall of Fame inductee Sir Bill Beaumont said: “Our beloved game of rugby would not be what it is today without the contributions of remarkable trailblazers, men and women, who form the World Rugby Hall of Fame. They are players and coaches, true legends of the game that have embodied our values and will continue to inspire generations to come.

“On behalf of the rugby family, I would like to recognise and celebrate the outstanding achievements of this year’s six new inductees, Richie McCaw, Shiggy Konno, Os du Randt, Peter Fatialofa, Graham Henry and Diego Ormaechea for their outstanding career and thank them for their immense footprint on our game.

“We look forward to honouring them in November at what promises to be a very special night.”

Fellow World Rugby Hall of Fame inductee and Chairman of the Hall of Fame panel John Eales said: “It is an honour to recognise the contribution of our newest inductees who, over different eras and regions, have inspired millions of rugby players and supporters. Through their induction, they represent the many thousands of men and women who have made our game great.”

For more information on the World Rugby Hall of Fame, visit www.worldrugby.org/halloffame.

Os du Randt fittingly retired from the game at the very top in 2007 having won a second Rugby World Cup, the only Springbok to do so, following South Africa’s 15-6 victory over England in the final at the Stade de France in Paris.

Regarded as one of the finest loosehead props of all time, Du Randt won the first of his 80 international caps in 1994, the year before South Africa’s historic triumph on home soil, and was the last active member of that iconic squad.

Du Randt was sidelined through injury from 2000-03 but returned to the Springboks’ ranks against Ireland in Bloemfontein in June 2014, thus ending a five-year absence from the international arena.

The fact that he missed 46 matches during his time away makes Du Randt’s final tally of Test caps all the more remarkable and until being overtaken by John Smit in late 2008, the revered prop held the record as South Africa’s most-capped forward.

Aside from his Rugby World Cup successes he was also able to get his hands on the Tri-Nations trophy in 2004 (now the Castle Lager Rugby Championship), as well as enjoying a successful provincial and Vodacom Super Rugby career in South Africa.