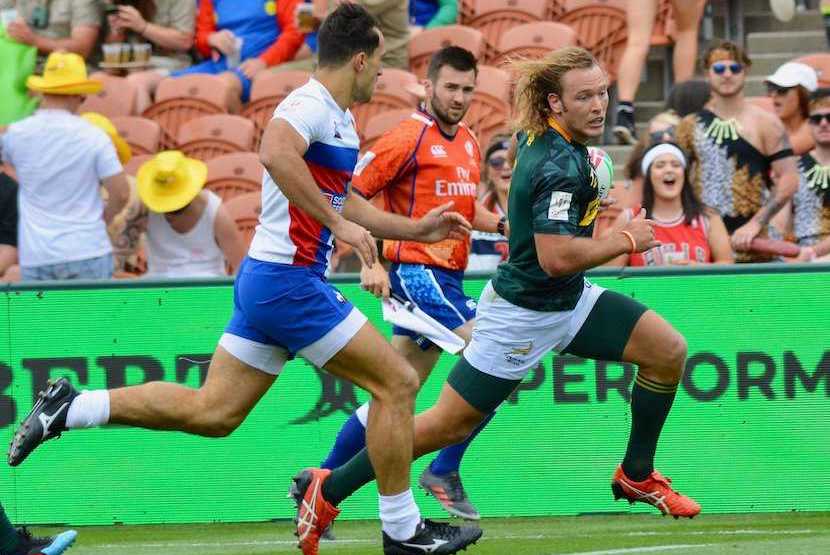 It’s amazing the difference one tournament can make on the World Sevens Series circuit. Going into the Sydney leg of the 2019/20 season, South Africa were trailing log leaders New Zealand by 15 points after a terrible performance in Hamilton. But after emerging from Australia as the losing finalists and with New Zealand failing to qualify for the Cup competition knockout round, South Africa have closed the gap to within nine points. In the fast-paced world of Sevens rugby, fortunes can change pretty quickly. As the circuit moves to North America, coach Neil Powell has a number of options to play with as he selects his squad, resting three key players and giving three younger players some much-needed game time. The relative inexperience of the three new players is balanced by the vast experience of players like the evergreen Cecil Afrika who will play in his 65th tournament, Branco du Preez who plays his 74th, and Werner Kok who reaches a milestone of 50 tournaments for the Blitzboks. After the next two tournaments in Los Angeles and Vancouver there’s a break of two and a half months until the World Sevens Series resumes in London. The gap is due to the postponement of the Singapore and Hong Kong events because of the coronavirus outbreak. The delayed events are scheduled for October, after the Olympic Games in Tokyo. – David O’Sullivan

Werner Kok will play in his 50th HSBC World Rugby Sevens Series tournament for the Springbok Sevens team next weekend in Los Angeles, where Ryan Oosthuizen, Kurt-Lee Arendse and Mfundo Ndhlovu will return to action in the green and gold.

Blitzbok coach Neil Powell made three changes to the side that lost in the final of the HSBC Sydney Sevens early this month, with Justin Geduld, Chris Dry and Zain Davids being rested after featuring in all four tournaments of the series in Dubai, Cape Town, Hamilton and Sydney so far.

Oosthuizen (in for Dry) and Arendse (in for Geduld) both played in the opening two tournaments of the season, while Ndhlovu last played in Paris last year when the 2018/19 World Series concluded.

Ndhlovu will travel west at official reserve, with Sako Makata elevated into the starting team to take over from Davids.

Stedman Gans will again captain the side in the absence of Siviwe Soyizwapi, who just missed the return to play deadline for this trip.

The Blitzboks, currently second on the overall log, have been drawn in the same pool as Kenya, Canada and Ireland at Dignity Health Sports Park in Carson, Los Angeles.

The South Africans will face Ireland and Canada for the first time in the current series, but will find familiar foes in Kenya, with their match against fellow Africans their fourth of the season. The East Africans outplayed the Blitzboks in their previous meeting in Hamilton.

Powell said they needed to adjust their plans with the news that the Hong Kong and Singapore legs of the series have been rescheduled, but some rest for players were always on the cards.

“Justin, Chris and Zain played a lot of rugby so far and were always going to get a rest this trip,” said Powell.

“Ryan is very keen to get back into the action, Kurt-Lee has recovered from the knock that kept him out of the previous trip and Sako deserves his chance after travelling as the extra player to New Zealand and Australia.

“Mfundo is also back to full fitness and with Angelo Davids also able to play in the forwards, we called on his skills out wide for this trip. We want to give all players a fair opportunity to stake a claim for the Olympic Games.”

Kok will follow in the footsteps of Branco du Preez, Chris Dry, Kyle Brown, Frankie Horne, Cecil Afrika, Philip Snyman and Justin Geduld when he takes the field in his 250th match for his country.

The inclusion of Du Preez means that he will extend the SA record for tournament appearances in the World Series to 74. Afrika will also could extend his career point’s record for the Blitzboks (1445 points).

The players and management depart for the USA on Saturday.

The Springbok Sevens squad for the HSBC LA Sevens is:

The Pools for the HSBC LA Sevens are: