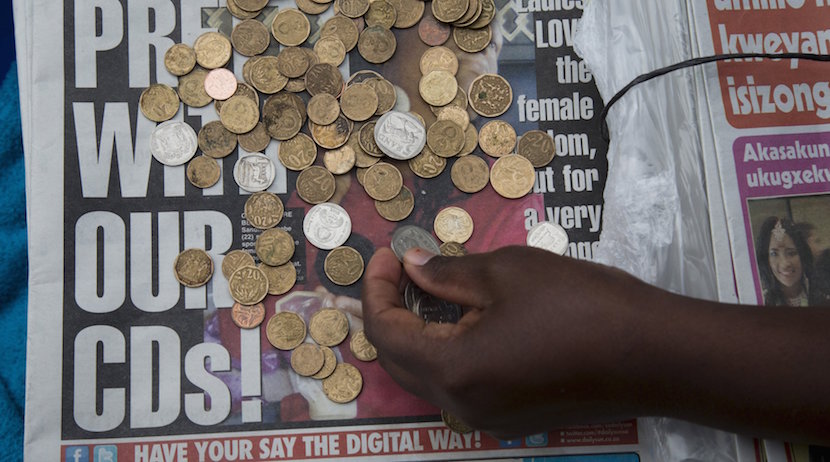 Bloomberg’s most accurate Rand forecaster predicts better times for pundits. Enrique Alvarez, who sits aloft 30 other currency specialists because of his accurate forecasting over the past 3 quarters, says the currency sell off is ‘excessive’. He says things cannot continue going down forever if things aren’t getting worse. The Rand currently sits at levels last seen in 2002, a period which saw the Reserve Bank raise interest rates by 4 percent in total. But Alvarez expects the Reserve Bank to be conservative on monetary policy, and doesn’t expect anything more than a 25 basis point hike. A ‘perceived’ win-win for South Africans but as any currency forecaster will tell you, you’ve always got a 50 percent chance of getting it right and wrong. Most South Africans will be hoping Alvarez continues his winning streak. – Stuart Lowman

(Bloomberg) — The rand’s top forecaster is predicting South Africa’s currency will rally after dropping to a record low.

“The selloff is completely excessive,” Enrique Diaz- Alvarez, chief risk officer at Ebury Partners, the currency’s most accurate forecaster among more than 30 analysts for the past three quarters according to data compiled by Bloomberg, said by phone from London on Sept. 7. “The currency, everything, is priced for the worst-case scenario.”

The currency of Africa’s most industrialized economy will reap the best returns among 31 major and emerging markets by the end of the year after Turkey’s lira, according to data compiled by Bloomberg. The rand has weakened more than 16 percent against the dollar this year, pushing its 14-day relative strength index to the lowest level since 2002, signaling to analysts that the currency has dropped too far, too quickly.

The rout is an overreaction to slowing growth in China, the largest buyer of South African raw materials, and speculation on the timing of Federal Reserve interest-rate increases, according to Diaz-Alvarez. He predicts a 2.4 percent advance for the rand against the greenback by the end of 2015 as lower oil prices cut the nation’s import bill. BlackRock Inc., the world’s biggest money manager, also views the rand’s drop as a part of a “dramatic overshoot” and expects the currency to strengthen as the Fed lift-off calms markets.

Some home grown problems have weighed on the rand as a power crisis chokes growth in an economy where one in four people are unemployed. Factory production declined every month except for March in the first half of the year, pushing the country toward recession following a second-quarter contraction.

“The situation is gradually deteriorating,” Phoenix Kalen, an emerging-market strategist at Societe Generale SA in London, who expects the rand to end the year at about 13.40, said by phone on Tuesday. “There’s still various unrest issues coming out of the mining sector,” while growth has collapsed and the country’s leadership lacks political cohesion, she said.

Only “a symbolic hike” of 25 basis points to signal to the market that the bank is taking note of the rand fall is necessary, Ebury’s Diaz-Alvarez said. “A mild hike would stabilize the currency without having much impact on business conditions.”

Ebury, which previously expected the rand to end 2015 at 12 per dollar, this week revised its forecast to 13.50 to reflect a faster-than-expected slowdown in China. The fall in commodity prices will probably have a neutral effect on South Africa because it imports most of its oil needs, making current levels “a complete overreaction,” Diaz-Alvarez said.

The rand weakened 0.5 percent to 13.8619 per dollar by 1:38 p.m. in Johannesburg. The currency may return 4.5 percent against the dollar by the final quarter of 2015, data compiled by Bloomberg show.

The rand’s depreciation to more than 20 per British pound is also “unbelievable,” Scott Thiel, the deputy chief investment officer of BlackRock, said on Sept. 7. “I would venture to say the day the Fed raises interest rates the South Africa rand will be stronger,” he said.

South Africa’s currency fell through the key psychological level of 14 per dollar for the second time ever on Sept. 7 and is set for five weeks of straight declines, the longest stretch of losses since October last year. The Reserve Bank won’t defend the rand, seeing benefits to exporters and a muted pass-through to consumer prices.

“The SARB can afford to be subdued in its response to the currency devaluation,” according to Ebury’s Diaz-Alvarez said. “One thing is, commentators often say ‘things are bad therefore recent moves will continue.’ Well, things are bad, there’s a selloff, the prices reflect the bad situation, it’s time for them to stabilize. Things cannot continue going down forever if things aren’t getting worse.”