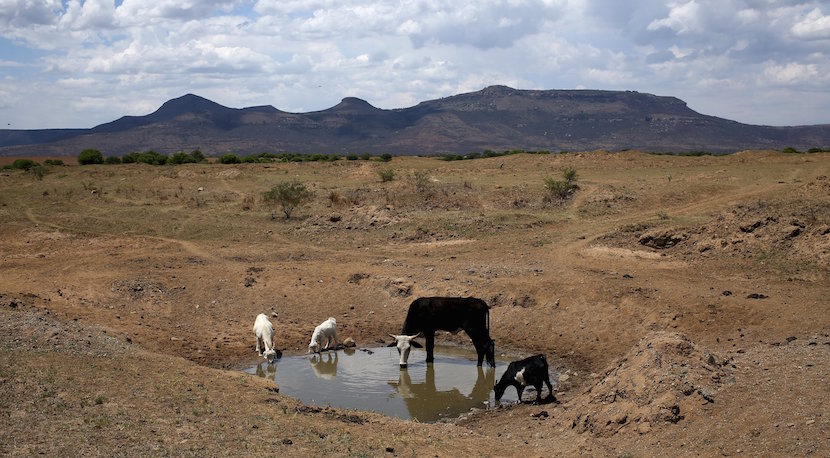 The unpleasantries of working in a heatwave are becoming well-known by those living on the highveld. And to compound the misery, the City of Johannesburg has implemented level 2 water restrictions, cutting out sprinkler use in the garden between 6am and 6pm daily. The implications go deeper as the cost of food is expected to fuel inflation and tighten consumer pockets, with maize imports on the rise. All the blame put on mother nature as she battles with El Nino. According to water expert Anthony Turton, this is not entirely the case. In the piece below, Turton says the water shortage is an induced one. He blames a lack of strategic planning, loss of skills and poor waste water management. The full report is also available. – Stuart Lowman

“The water shortage is also an ‘induced’ one,” says Turton. “It stems from a lack of strategic planning, a loss of skills to ‘transformation’, and the fact that poorly functioning waste-water treatment plants are spewing close on 4 billion litres of untreated or partially treated sewage into the country’s dams and rivers every day.”

These sewage spills are the most serious of the many problems in the water sector. “Just as a small volume of oil destroys the quality of a large volume of water, so a small source of persistent sewage has essentially the same effect.”

Sewage discharges are also driving the eutrophication of most major dams. Eutrophic water is characterised by the presence of high levels of nutrients, which in turn promote the growth of cyanobacteria, commonly known as blue-green algae.

One very common species of cyanobacteria produces a potent toxin known as microcystin. This is chemically similar to cobra venom. It is also carcinogenic (cancer-producing) and damages the liver and central nervous system.

Warns Turton: “The microcystin levels found in a number of major dams – including Hartbeespoort, Hazelmere, Midmar and the Vaal Dam – are amongst the highest ever measured in the world.

“Microcystin toxin levels become a concern in developed countries at far below the levels commonly found in South Africa.

“Moreover, nothing is being done here to remove the toxin. There are only two known technologies capable of neutralising microcystin, and neither is in mainstream use in any of the country’s bulk potable water treatment plants.

“Worse still, no one knows whether these technologies can in fact neutralise microcystin at the concentrations found in South Africa. In this regard, we are truly flying blind.”

Instead of dealing with these difficult issues, the Government is under-reporting the extent of eutrophication. Official reports suggest that only 5% of the national water resource is at risk, but a recent study by the Council for Scientific and Industrial Research (CSIR) has found that at least two thirds of South Africa’s largest dams are already eutrophic.

The more eutrophication proceeds, the more the 38 billion cubic metres of water in our dams are likely to become unusable.

“This looming disaster could have been avoided if a rigid concept of transformation had not been allowed to trump the imperative to safeguard public health,” says Turton.