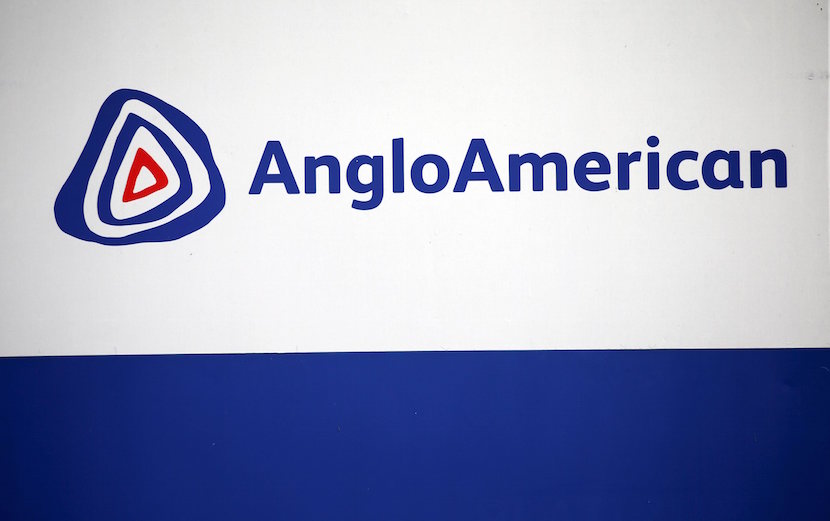 Sometimes even the most dramatic headlines fail to describe the shock. After yesterday’s announcement that it will sell or close half its operations and cut employees from 135 000 to 50 000, a company which one ruled the JSE like the Colossus of Rhodes, no longer makes even South Africa’s Top 20. Another double digit plunge in the Anglo American share price followed the disclosure that it has now entered “survival mode”. Anglo’s market cap ranking on the JSE is now number 23 on the JSE – half the value of Vodacom, Standard Bank and Old Mutual and a mere one eighth of recently emerged media giant Naspers. Anglo’s accelerated fall from grace has further damaged some vaunted reputations – including high flying asset management firms Coronation and Allan Gray which, since June, have been buying its stock, adding to already sizeable holdings. The biggest financial hit, though, is being taken by foreigners. Non-SA shareholders own around two thirds of Anglo’s equity, a worrying fact which suggests yesterday’s news is likely to stimulate more sell orders from abroad. The company celebrates its centenary in 2017. How the mighty has fallen. – Alec Hogg

The worst slump in commodity markets for a decade engulfed the mining sector on Tuesday when Anglo American, one of the industry’s most venerable names, shelved its dividend and said it would cut two-thirds of its workforce.

The moves are part of a radical restructuring that will see the company retreat from all loss-making assets, close mines and shed some 85,000 jobs. 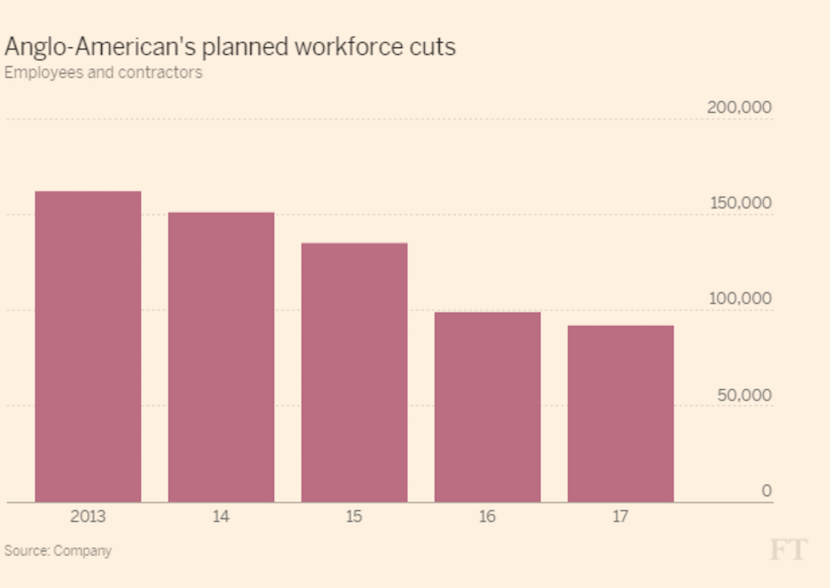 Shares in Anglo dropped by more than 12 per cent to a record low on the news. Other mining and natural resources stocks also fell as oil dipped below $40 a barrel for the first time since the financial crisis began and iron ore, the biggest mined commodity, hit a 10-year low.

The moves by Anglo American underscore the challenges facing the mining sector as it scrambles to deal with a slowdown in China and a glut in global supplies of everything from copper and platinum to coal and diamonds.

During the boom years of the commodities supercycle, miners invested hundreds of billions of dollars in projects as a rapidly growing China sucked in ever increasing amounts of raw materials. But with commodity prices now at multiyear lows they are being forced to slash spending and restructure their businesses to conserve cash and cut costs.

Anglo said that it would withhold dividend payments for the next 18 months, echoing rival Glencore which earlier this year also moved to shore up its balance sheet by cutting payouts to investors.

Read also: Anglo to slash another 13% off its book value after R100bn iron ore folly

It will also lower its capital spending, with estimates for next year reduced from as much as $3.9bn to $3.2bn, and will attempt to raise $3bn to $4bn from asset sales. It also said it may consider a wholesale spin-off of some assets.

Once the restructuring is complete, Anglo could be left with about 50,000 staff, compared with 135,000 now. It is likely to own “between 20 and 25” assets compared with the 55 mines and smelters it owns today, its chief executive Mark Cutifani said.

“Any asset that is cash-negative will not remain in the portfolio . . . it is a strategic call and we are not going to look back,” he said.

The decision confirms an industry-wide pullback from investment. Rio Tinto also said on Tuesday that it would cut capital expenditure in 2016 from $6bn to about $5bn.

But some bankers said that Anglo’s moves were not radical enough. “The chief executive and Anglo American appear in denial,” Deutsche Bank said in a note to clients.

“Production, cash flow, earnings are all under pressure and the group is not moving quickly enough. The poor newsflow and downgrades are likely to continue until there are asset disposals or somebody else steps in.”

Anglo has been particularly badly hit by the fall in the price of Iron ore, a major source of profits for the company, as well as for rivals BHP Billiton and Rio Tinto. The steelmaking ingredient has dropped 40 per cent this year.

Copper, viewed by many investors as a barometer of economic growth because of its wide range of uses, has also fallen sharply. Over the past 12 months it has slumped 30 per cent to less than $4,600 a tonne.

Mr Cutifani, who sold Anglo’s corporate jet when he became chief executive in 2013, also confirmed the miner’s symbolic retreat from its large headquarters at an exclusive address in central London. From 2017, Anglo will co-locate with De Beers, its majority-owned diamonds business.

As part of the restructuring, Anglo will amalgamate some of its businesses. It will bring coal and iron ore together into a bulk commodities division, and its other mines, including its platinum assets, into an industrial division. De Beers will be the third main business unit.

I fully understand where you are coming from, but give me this one.
I bought Anglo American at R292 a share. It did nothing during the last 6 year bull run. It is currently trading at R71 rand and I am down 75% on my investment. Do I hold on ?  – Arvind.

Alec Hogg responds: Maybe, just maybe the worst news is now behind us. And value investors will argue that the price will revert to its mean. So I’m not much use here. But as a broad philosophy, I believe the reason for buying into the equity of any company is to leverage the expertise of the managers – to bet on human ingenuity. In the resources sector, the influence of managers is small compared with the broad swings of commodity prices. There will come a time when Anglo’s shares are too cheap to ignore as a cigar butt. But even it is doubtful whether one with my philosophy would be attracted. For me, resources stocks are very much in the “too tough to call” category. Especially now.