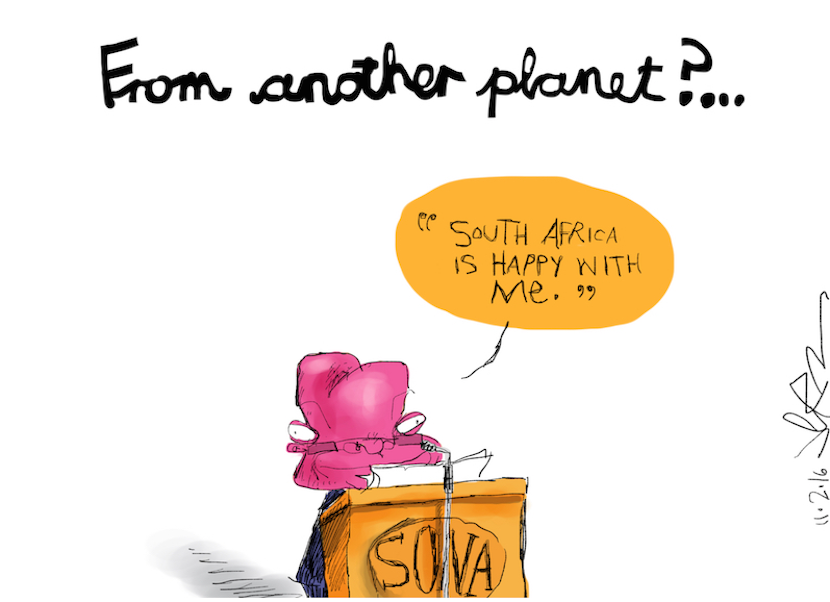 Opposition politicians are convinced SA President Jacob Zuma will soon be permanently heading home to Nkandla. Surveys among voters suggest most South Africans would also like to see the back of the country’s scandal wracked, untrusted Number One. Even the President’s closest supporters within the ruling party are wavering, witness ANC General Secretary Gwede Mantashe’s outburst in last weekend’s Sunday Times. But Zuma himself has no intention of heeding the urgings of those like UDM’s Bantu Holomisa who suggests he resigns now and “leaves with dignity.” In his first interview with an independently minded publication since Nenegate, Zuma told the Financial Times of London this week he has absolutely no intention of departing centre stage. He added, just for good measure, that he has no regrets at firing respected finance minister Nhlanhla Nene and replacing him with a backbencher in what has been exposed a rather transparent grab by cronies to take control the SA Treasury. Zuma, who on the night he fired Nene told a live television audience all other continents would fit into Africa and that biblical Paul of Tarsus (which is in Turkey) actually came from the Sudan is unapologetic. He takes no responsibility for the R500bn in damage wrought by Nenegate and the “Zuma discount” now priced into the Rand and all SA financial assets. The President is not a great reader. But perhaps when he peruses the graphs included in this piece, his eyes will open. Those pictures tell the story better than 1 000 words. – Alec Hogg

Jacob Zuma has vowed urgent “concrete action” to prevent South Africa’s debt from being downgraded to junk, as pressures mount on the country’s $350bn economy.

In an indication of the difficulties facing the bellwether emerging market, the South African president told the Financial Times the government needed to change tack on issues such as co-operating with business and curbing spending.

“It is clear to us we need to do things differently,” Mr Zuma said in his first newspaper interview since triggering market turbulence by replacing two finance ministers in the space of a week in December. “We need to have concrete action . . . There are things that are going to be adjusted.”

The government has held meetings with chief executives in recent weeks as it reacts to a deepening sense of economic crisis and seeks to smooth often strained relations between government and business. “We talked about the urgency,” he said.

But rating agencies and investors are looking for greater specifics from South Africa as it battles with a currency that dropped to nearly R17 to the dollar in January and growth that the IMF has forecast will fall to a disappointing 0.7 per cent.

Mr Zuma displayed his characteristic defiance by defending his leadership, adding that the ruling African National Congress remained “united, absolutely united” behind him, despite speculation that he is at his most vulnerable since taking office in 2009.

With his credibility tarnished by scandals, Mr Zuma will have to follow up his rhetoric with action to convince sceptics he is serious about tackling the economy.

Asked if there would be a new phase to his administration, he said: “Zuma is going to go [on] as he has been doing,” while acknowledging the risk of a downgrade.

“Perhaps it might reach junk status,” he said of the country’s sovereign bond rating. “We as a country need to defend that, to ensure we don’t reach that stage,” Mr Zuma said. 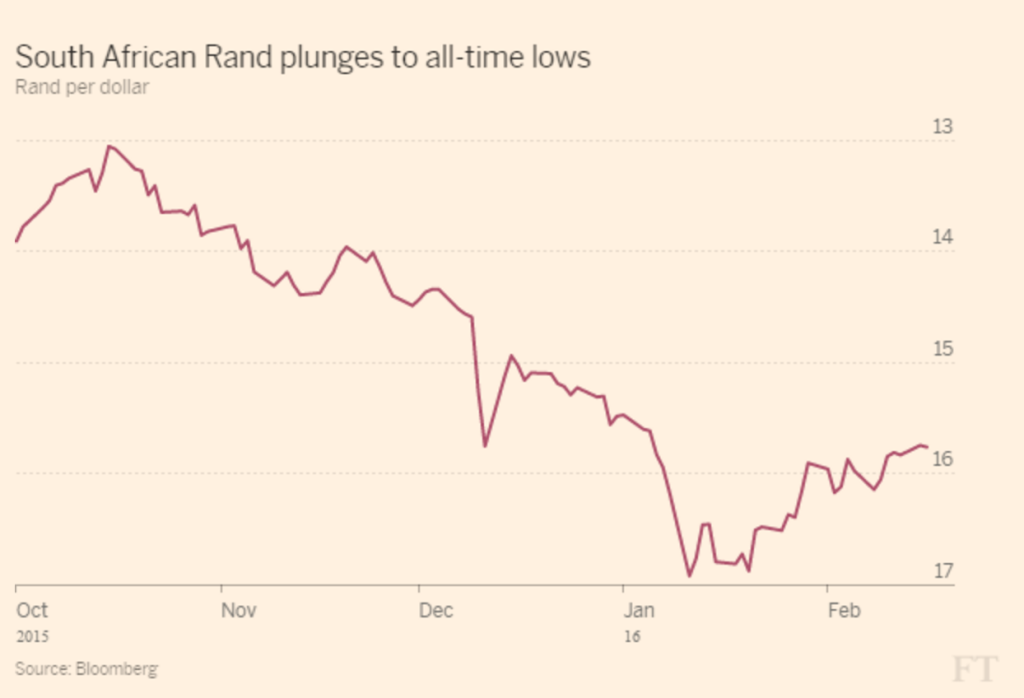 Standard & Poor’s and Fitch have placed South Africa one notch above subinvestment grade. A downgrade would raise the cost of borrowing, trigger portfolio outflows from one of the world’s most traded emerging markets and cause the knock-on downgrading of state entities and banks.

In October, the Treasury said the budget deficit was estimated at 3.8 per cent of gross domestic product for 2015 and would fall to 3 per cent during the medium term. 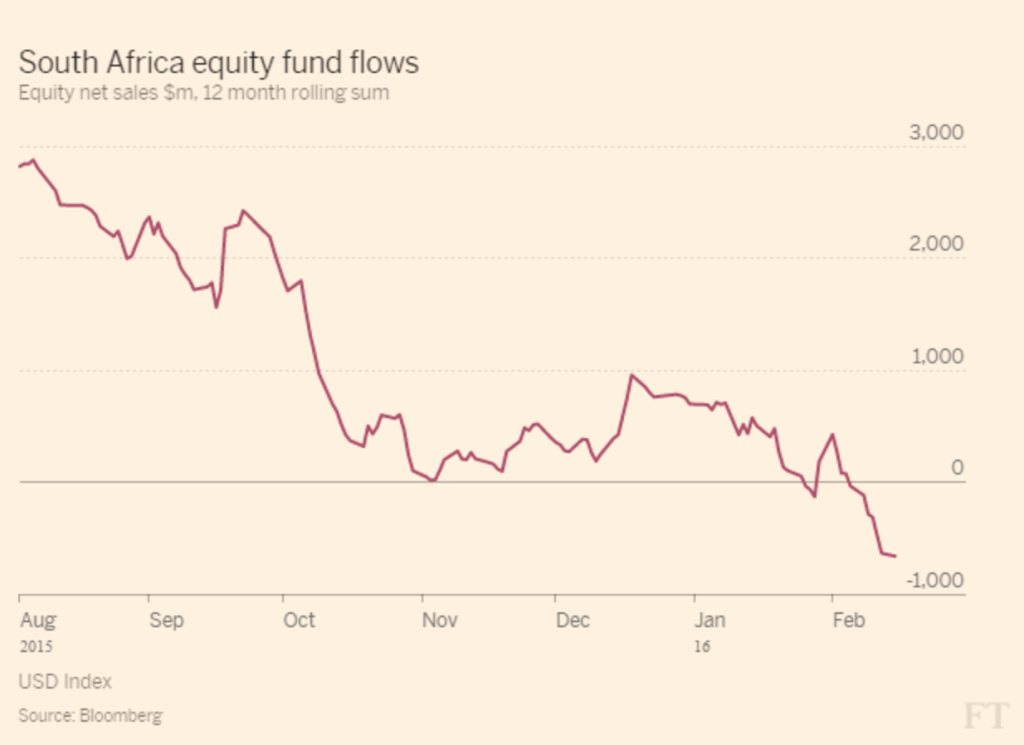 Aside from its domestic challenges, South Africa has been caught up in the ill winds of a global emerging market slowdown that has depressed the GDP growth rate of developing nations for six straight years.

The waning of commodity demand from a slowing China and a return to higher interest rates by the US Federal Reserve have combined to clobber countries that rely on commodity exports and require significant capital inflows to finance debts.

Rating agencies will be scrutinising South Africa’s February 24 budget. The government’s challenge is to boost growth, forecast by the IMF to drop to 0.7 per cent, while simultaneously reining in fiscal and current account deficits.

David Faulkner, an economist at HSBC, said the government’s message on cutting expenditure and narrowing the fiscal deficit was not enough to “change the fiscal trajectory” and offset the risk of a rating downgrade.

“There needs to be more in the budget. It needs to be credible, with the deficit moving below 3 per cent of GDP. But it’s the credibility that is most important, that the mechanism that you achieve fiscal consolidation through is believable and attainable,” he said. “We are looking to the budget to restore the trust in South Africa’s macro institutions delivering macro stability.” 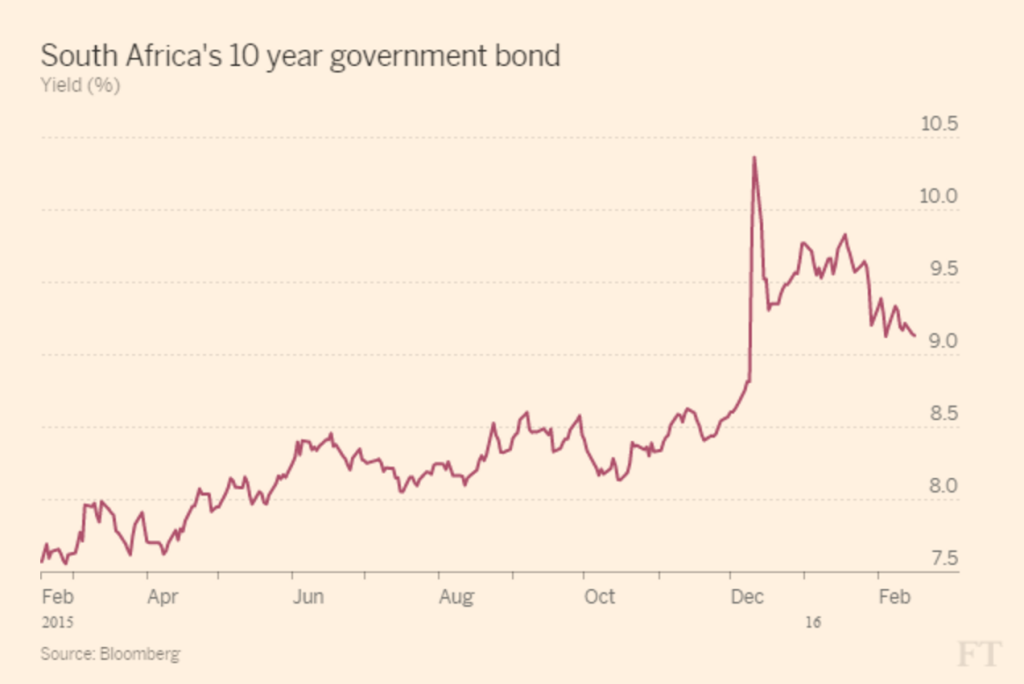 In December, Mr Zuma, who still has three years to serve of his final term, shocked markets and South Africans by dismissing Nhlanhla Nene, a respected finance minister, and replacing him with a little-known backbencher, David Van Rooyen.

The move wiped billions of dollars off the country’s equity and bond markets and sent the rand skidding to all-time lows, triggering one of the worst economic crises of the democratic era. It also threatened the credibility of the Treasury, which had previously been regarded as above the political meddling afflicting other state institutions.

Four days later, under pressure from his own ANC as well as powerful unions and business, he appointed Pravin Gordhan, a former finance minister, to another term. Mr Gordhan is seen as a safe pair of hands at a time when South Africa is at risk of slipping into recession.

On the decision to replace Mr Nene with Mr Van Rooyen, Mr Zuma insisted it was “absolutely correct”, while repeating his assertion that it was related to the former finance minister’s nomination for a post at a new Brics development bank. He did not explain why Mr Nene had not yet received the nomination. 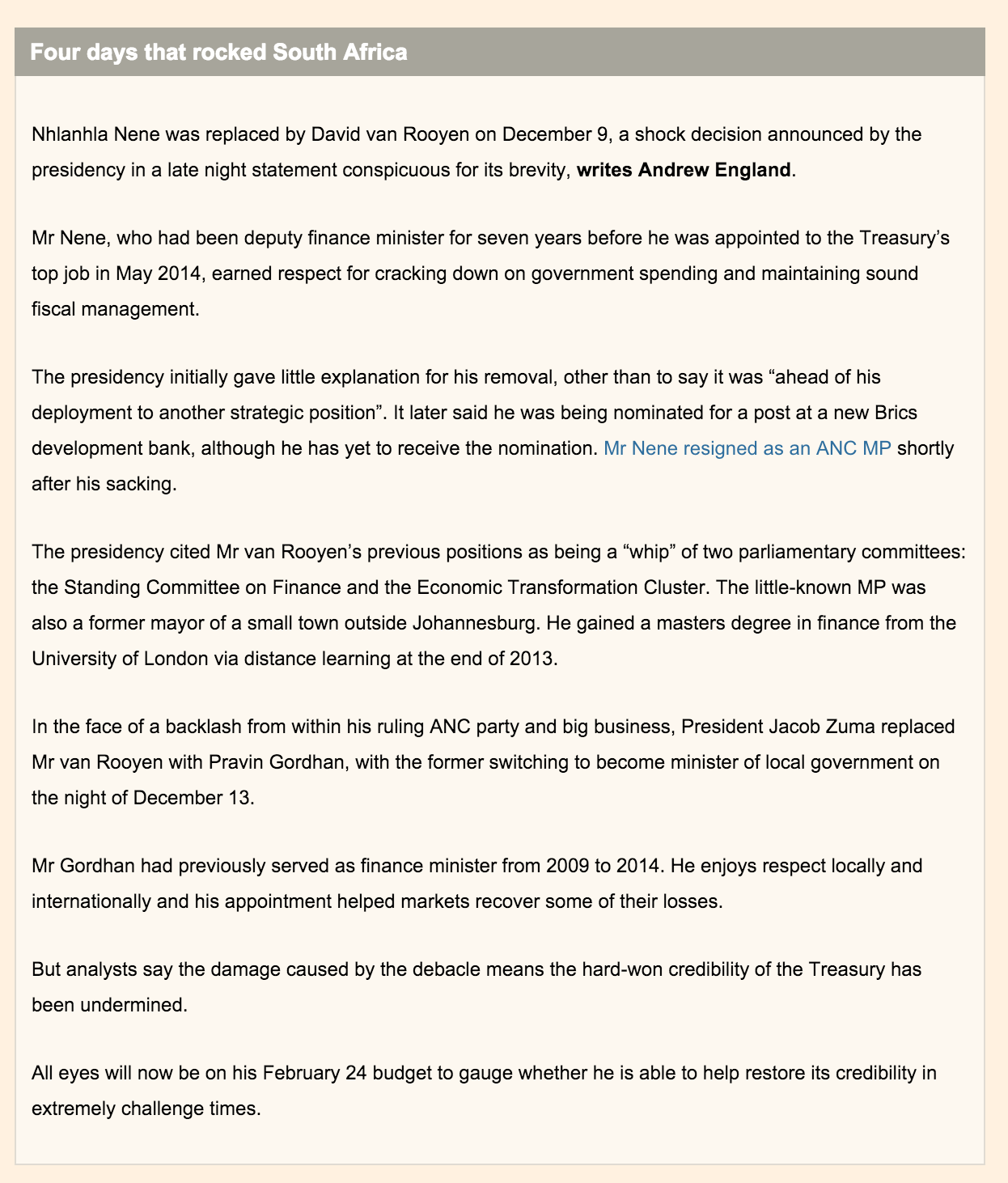