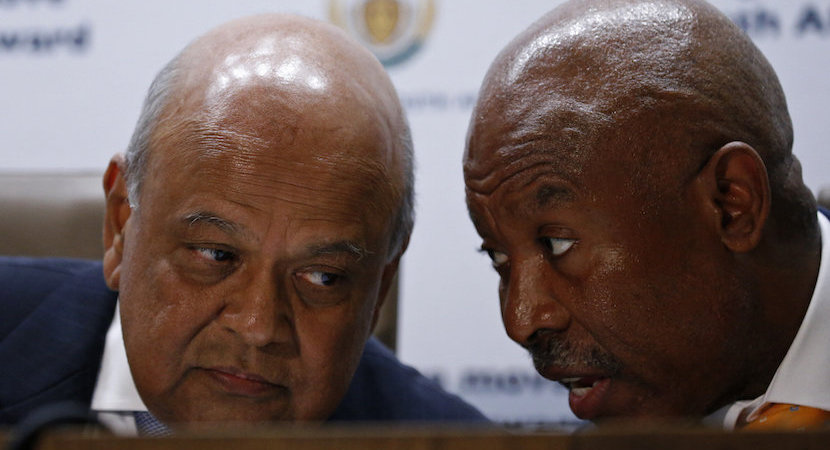 As temperature rises between Finance Minister Pravin Gordhan and SARS Commissioner Tom Moyane, some analysts believe the real battle is not over the collection agency. But, rather, for a bigger prize, the real seat of financial power – the Treasury, which is where ultimate control over taxpayers’ funds actually vests. In post-Budget events the past two days, Gordhan has been direct: Moyane’s behaviour is “totally unacceptable” and the attempted takeover of Treasury by political interests is something all South Africans “should say we are not going to allow to happen”. Gordhan’s predecessor Trevor Manuel, one of the first ANC heavyweights to blast Zuma’s appointment of lightweight Des van Rooyen, also weighed in on the Moyane fight. Manuel told one of the events it would have taken him “20 seconds”  to draft a letter firing the errant SARS head. With the ANC supporting Gordhan, for the moment those fighting the network of patronage have a clear ascendancy. – Alec Hogg

By Rene Vollgraaff and Mike Cohen

“I think Mr. Moyane is a sideshow,” Jannie Rossouw, head of the University of the Witwatersrand’s school of economic and business sciences in Johannesburg, said by phone. “This is a power battle over the ministry of finance. All this is at the expense of stability in the country.’’

Widely respected among investors, Gordhan also enjoys some support from opposition parties and the African National Congress, with the ruling party Friday expressing “full confidence” in him and his efforts to restore faith in Africa’s second-biggest economy. Yet he would probably lose any final showdown with Zuma, according to Robert Schrire, a politics professor at the University of Cape Town.

“Gordhan is very expendable politically, he exercises delegated power,” Schrire said by phone.“He unfortunately does not have a political base. From a global and economic point of view, his departure would do enormous damage.”

Zuma reappointed Gordhan as finance minister, a post he had held from 2009 to 2014, in December after his decision to install little-known lawmaker David van Rooyen sparked a selloff in the rand and the nation’s bonds. Two days before Gordhan presented his budget on Wednesday, Zuma described Van Rooyen as the most qualified finance minister his administration has had, a comment that Schrire said meant that the president “insulted him grossly.”

Gordhan slammed the appointment on Friday, saying the independence of the institution was called into question.

“It’s been said that Treasury was almost taken over in December,” Gordhan said in a panel discussion in Johannesburg. “All of us need to speak with one voice to say: ‘We are not going to allow this to happen. In as much as we don’t want to sacrifice our fiscal sovereignty, we also don’t want to sacrifice our political sovereignty whether it’s from the inside or the outside.”

The Revenue Service has been rocked by a spate of resignations since Moyane took office and local newspapers reported on a range of allegations of wrongdoing by executives who served during Gordhan’s tenure as commissioner of the authority between 1999 and 2009. A special investigations unit of the South African Police Service wrote to Gordhan to find out what he knew about an alleged rogue unit within the tax agency that spied on political leaders, including Zuma, Business Day said.

The letter by the police unit “is an attempt by some individuals who have no interest in South Africa, its future, its economic prospects and the welfare of its people,” Gordhan said in an e-mailed statement on Friday. “If necessary, I will take appropriate legal action to protect myself and the National Treasury from whatever elements seeking to discredit me, the institution and it integrity.”

Gordhan said he will make no more public comments about rumors concerning the Revenue Service.

Moyane was absent from a press conference in Cape Town on Feb. 24 before Gordhan presented the budget in parliament, an event the tax office head usually attends.

The public will know “in a couple of weeks” how the issues at the Revenue Service will be resolved, Gordhan said. Asked if he had the political backing he needed to do his job, the minister responded: “If you see me sitting here in October, then I do have political support. If you don’t see me here in October….That how life works, isn’t it?”

The rand slumped as much as 0.9 percent against the dollar on Friday, the worst performer among 31 major and developing- nation currencies.

The Revenue Service declined to comment in an e-mailed response to questions.

Zuma has shown no signs of diffusing the standoff, said the University of Witwatersrand’s Rossouw.

“It seems Mr. Zuma does not care about the impact on the economy,” he said. “The ministry of finance can’t become a game of chicken. That is what it is becoming now.’’