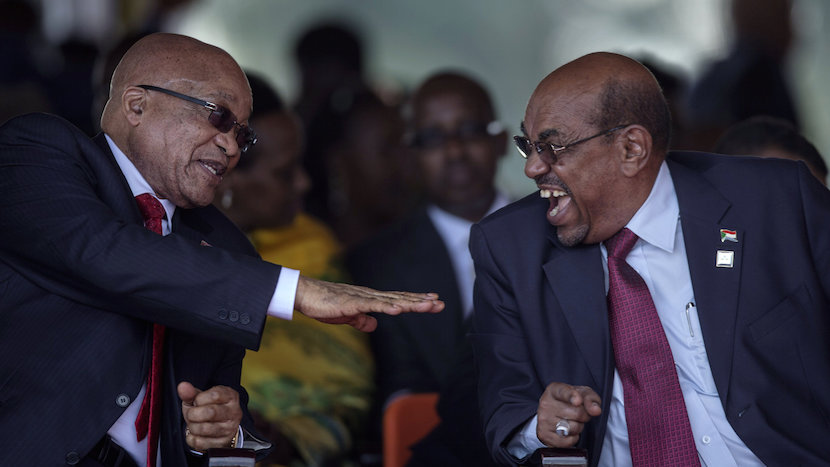 South Africa’s political pendulum has swung decisively back to the latest Big Man of Africa. The levers of patronage and a governance system which concentrates power has rescued President Jacob Zuma after yet another series of what should have been career-ending blunders. Even Nenegate’s direct hit of R100bn for public sector pensioners and his abdication of key cabinet appointments to the crony capitalist Guptas hasn’t been enough to end his misrule. With each passing day, Zuma’s position has strengthened, loyalists have become emboldened and critics fallen silent. Even one-time critic, ANC Secretary General Gwede Mantashe is now resigned to having Zuma see out his full term. The Arms Deal and Gupta State Capture investigations have been whitewashed; and with a Zuma-friendly boss at the NPA, there is little chance hundreds of corruption charges against the President being resuscitated. Even more chilling, Mantashe warned yesterday the position of Finance Minister Pravin Gordhan is becoming increasingly tenuous. Democrats might be bemused, but as Prince Mashele explained so masterfully in The Sowetan three weeks back, under Zuma’s guidance SA has simply become just another African country. With all that this entails for citizens and investors. – Alec Hogg

(Bloomberg) — South African President Jacob Zuma seemed in danger of being ousted two months ago after the nation’s highest court ruled he failed to uphold the constitution. Now he appears as powerful as ever, tightening his grip on the ruling African National Congress as a campaign to oust him falters.

“After the court ruling, Zuma was standing on shaky ground,” said Sakhile Hadebe, a politics lecturer at University of KwaZulu-Natal, said by phone from the eastern town of Pietermaritzburg. “The pressure has slowly vanished. He’s dodged the bullets.”

Controversy has dogged Zuma’s political career. A polygamist with four wives and more than 20 children, he was acquitted of rape charges in 2006, and became president in May 2009, just weeks after prosecutors dropped graft charges against him. In December, he sparked a selloff of the rand and the nation’s bonds when he fired his respected finance minister, Nhlanhla Nene. In March, senior ANC officials said Zuma’s friends, the Gupta family, offered them cabinet posts in exchange for business concessions.

Zuma has denied any wrongdoing, while the ANC has rallied to his defense, saying the party needs to unite to fend off an opposition challenge to its hold over urban areas including Pretoria, the capital, and Johannesburg, the nation’s commercial center, in local elections on Aug. 3.

The People’s Assembly, an alliance of 75 civil rights organizations, unions and church groups campaigning for Zuma to resign or be fired, attracted only a few thousand people to marches in Johannesburg and Cape Town on April 27 and it has since resorted to an internet campaign to drum up support.

Zuma’s power stems from his command of the ANC, which he’s led since 2007. His allies control almost all key ANC structures in the nine provinces and he’s secured the loyalty of most members of the party’s decision-making National Executive Committee by directly appointing them to government posts. Zuma’s time as ANC leader ends in late 2017 and his second and final term as president in 2019.

Read also: Day of Prayer hears Zuma has been “anointed” for Third Term as SA President

The NEC decided at a three-day meeting that ended Monday that Zuma should retain office despite the Constitutional Court’s ruling that he violated the law by failing to abide by graft ombudsman Thuli Madonsela’s directive to repay state funds spent on his private home, party Secretary-General Gwede Mantashe said.

“The NEC has called on all members of the ANC to close ranks and dedicate themselves to working for an overwhelming victory of the ANC in the local government elections,” Mantashe told reporters in Johannesburg on Tuesday. “Everything else must be subordinate to elections work.”

After initially calling on Zuma “to do the right thing” following the Constitutional Court ruling, the ANC in the central Gauteng province, which includes Pretoria and Johannesburg, backtracked last month and accepted his apology “for the frustration and confusion” the home-spending scandal caused.

Willies Mchunu, a close Zuma ally, was named premier of KwaZulu-Natal in place of Senzo Mchunu last week, cementing the president’s hold over his home province, which has the biggest concentration of ANC members.

An attempt by the Democratic Alliance, the main opposition party to have him impeached on April 6 was quashed by the ANC, which holds 62 percent of the seats in parliament. Lawmakers from the Economic Freedom Fighters, the second-largest opposition party, were forcibly evicted from the National Assembly on May 4 by security personnel when they tried to stop Zuma from speaking.

State prosecutors have stalled a bid by the DA to force them to reinstate the 783 graft charges against Zuma that were dropped in 2009. While the High Court ruled April 29 that the decision to abandon the case was wrong, the National Prosecuting Authority plans to appeal — a process that could take several months.

Those who have called on Zuma to go include former finance minister Trevor Manuel, Ben Turok, who once headed the ANC’s ethics committee, Cheryl Carolus, the ANC’s ex-deputy secretary-general who has served as South Africa’s high commissioner to London, and Christo Wiese, South Africa’s richest man. The calls come as Zuma’s administration struggles to reignite an economy expanding at its slowest pace since the 2009 recession and avoid a credit downgrade to junk.

The ANC may reassess whether to retain Zuma should it perform poorly in the elections, according to Pierre du Toit, a politics professor at the University of Stellenbosch, near Cape Town.

“For now Zuma has got the momentum on his side,” Du Toit said by phone. “If they consider him to be a liability, they will have to figure out some kind of face-saving exit strategy.”