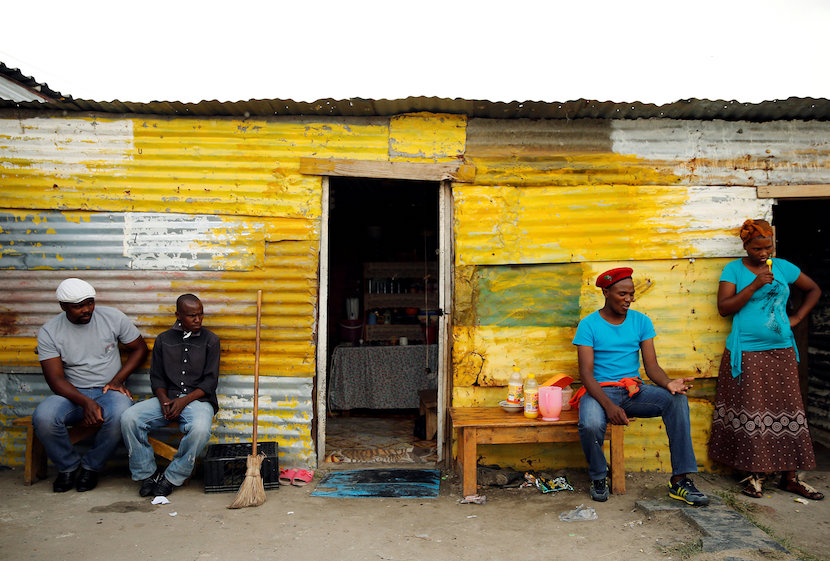 With South African media’s pre-election attention focused on the Big Three metros where the ruling ANC’s support has dipped below 50%, similar growth of competitive politics elsewhere has been off the radar. But it is in the second line of cities shocks could be greatest in the aftermath of next week’s municipal elections. Driving through the platinum belt yesterday, provided clear evidence that Julius Malema’s radical EFF is extremely popular in this key region of the North West province where the ANC-aligned trade union has been replaced by the militant AMCU. This is being mirrored in politics. Apart from lagging in the polls, the ANC’s prospect of retaining control of the region’s biggest city took a blow when a faction left the mothership to create a new opposition party. A victory for the EFF in Rustenburg would unleash a fresh dynamic in this volatile area, known globally after the police shot 34 striking miners at Lonmin’s Marikana mine. Investors in platinum stocks should brace themselves. – Alec Hogg

(Bloomberg) — Vukile Jebese arrived in Rustenburg in South Africa’s platinum belt 20 years ago filled with dreams of making his fortune. He got a job at Lonmin Plc and joined a labor union allied with Nelson Mandela’s African National Congress.

Over the years, his faith has faded in the party that led the campaign to end apartheid. Jebese, who works underground, quit the National Union of Mineworkers and joined the more militant Association of Mineworkers and Construction Union five years ago. Then he lived through the 2012 Marikana killings of 34 miners, including his cousin, when police opened fire on protesters who were demanding better wages and housing.

The growing alienation of workers in Rustenburg, about 120 kilometers (75 miles) northwest of Johannesburg, the nation’s economic hub, spells trouble for the ANC as it prepares for its toughest electoral test since the first all-race vote in 1994. The party is facing what Thabo Mashamo, a regional leader of the ANC-allied South African Communist Party, described as a “serious revolt in our region.”

“The ANC and its associated unions no longer care about us,” Jebese, 41, said in an interview east of Rustenburg, where Lonmin’s main mine is. “They have not done anything tangible for us after the Marikana event. Things are really tough here.”

The ANC is facing a mutiny in Rustenburg before the Aug. 3 election, with some members of its local branch having formed their own party, the Forum for Service Delivery. It’s also trailing the main opposition party, the Democratic Alliance, in key cities including Pretoria, the capital, and Johannesburg, according to the latest public-opinion survey compiled for Johannesburg-based broadcaster eNCA by research company Ipsos. The ANC has won more than 60 percent of the vote in every election since the end of white-minority rule.

The electoral contest in Rustenburg is a sign that “democracy is maturing,” ANC Secretary-General Gwede Mantashe said by phone. He described those behind the formation of the Forum for Service Delivery as “coup specialists” who refused to respect ANC decisions.

#Elections2016 #Rustenburg DP Cyril Ramaphosa says ANC has been campaigning in #Marikana. "I would gladly go to #Marikana, anytime".

An even bigger threat in Rustenburg may be the populist Economic Freedom Fighters, led by former ANC youth leader Julius Malema, 35, who was expelled from the party after disagreements with President Jacob Zuma. The EFF won 22 percent of the vote in Rustenburg in the 2014 national elections, compared to 57 percent for the ANC. It’s hoping to push the ruling party below the 50 percent required to form a municipal government.

“There has been a lot of public backlash toward the ANC over the Marikana massacre,” said Ralph Mathekga, a political analyst at the Johannesburg-based Mapungubwe Institute for Strategic Reflection.

Rustenburg, near the main operations of the world’s three biggest platinum producers, Anglo American Platinum Ltd., Impala Platinum Ltd. and Lonmin, is seeing its fortunes wane as the companies contend with a 42 percent decline in the price of the metal over five years and strikes over wages. Amplats, as the largest of the three miners is known, has fired about 15,000 workers since 2012, Chief Executive Officer Chris Griffith said on Monday.

Largely driven by people migrating from poverty-stricken areas in remote parts of South Africa and neighboring countries, Rustenburg’s population has soared to 383,000 from 75,000 in the past 15 years. That’s put the authorities in South Africa’s fastest-growing city under increasing pressure to provide services and housing in a community where more than a quarter of the workforce is unemployed.

The contest for the control of the Rustenburg local authority may have repercussions for mining companies as well, says Mathekga.

“We are entering a new phase in a political environment that is already laden with tension, and big business could end up being targeted as an area of interest,” he said.

The EFF has said it will march later this year to the private homes of mining executives to deliver the complaints of workers and the general public over poverty and economic inequality.

The National Union of Mineworkers, which was co-founded by South African Deputy President Cyril Ramaphosa, has lost its position as the biggest union in the platinum industry to the AMCU. NUM is “no longer a force to be reckoned with” in the area and that has eroded support for the ANC, Mathekga said.

“We are determined to push the ANC out of government,” said Buso Ledwaba, a former party member who joined other activists to form the Forum for Service Delivery after they were dropped from the ANC list of people to stand as councilors. “The public infrastructure needs serious repair. Sewage runs though the streets in town.”