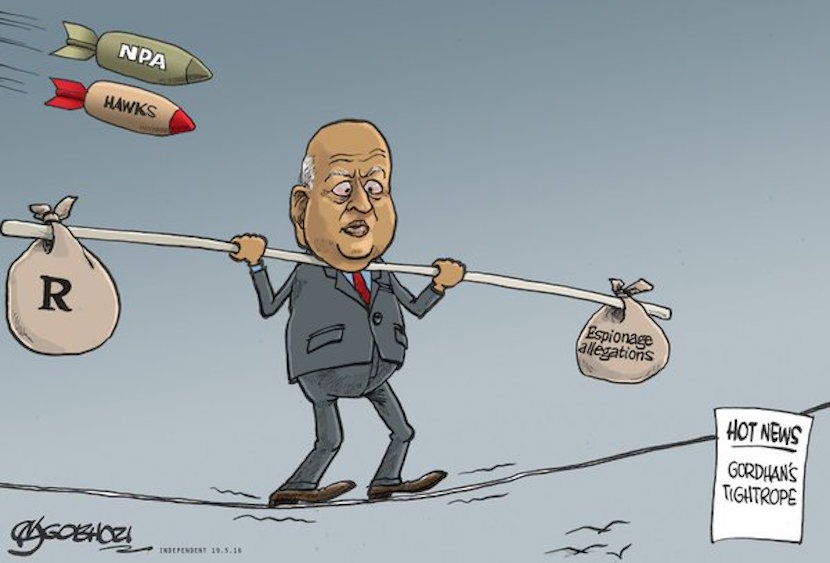 The South African Rand took a 35c hit against the US Dollar this morning (and a total of 47c on the day) after reports that Finance Minister Pravin Gordhan has been served with a formal criminal charge. Foreign investors are worried that this signals a renewed attack on the most respected member of President Jacob Zuma’s cabinet.

Market participants say uncertainty has grown as pressure on Zuma is approaching boiling point with his hold on power becoming increasingly tenuous in recent days.

The potentially explosive results of an investigation into “State Capture” is due to be released before the outgoing Public Protector Thuli Madonsela leaves office on Friday. Zuma was reportedly evasive in answering the PP’s questions when they met last week. Yesterday the Presidency issued a statement demanding the names of those interviewed.

Among them is former ANC heavyweight Parliamentarian Vytjie Mentor who has challenged Zuma to a live television debate to discuss her allegations. Mentor says she was offered the position of Minister of Public Enterprises by Zuma’s crony capitalist friends, the Indian immigrant Gupta family. She says she confronted Zuma who had been sitting in the next room.

The other star witness in the State Capture investigation is Gordhan’s deputy Mcebisi Jonas. Shortly after Mentor’s disclosures, Jonas issued a public statement that the Guptas had offered him position of Finance Minister. As with mentor, there were conditions attached.

The battle between Zuma and Gordhan has raged virtually since the Finance Minister was reappointed in the wake of the Nenegate debacle in December.

Gordhan has, in turn, been at war with one of his direct reports, the head of SA Revenue Services and close Zuma ally, Tom Moyane.

A book was released last week documenting alleged massive wrongdoing at SARS, which Gordhan ran for 10 years before joining the cabinet. In the first 19 months of Moyane’s reign, 55 SARS executives were ejected from the organisation, ending a string of investigations into criminal activities.