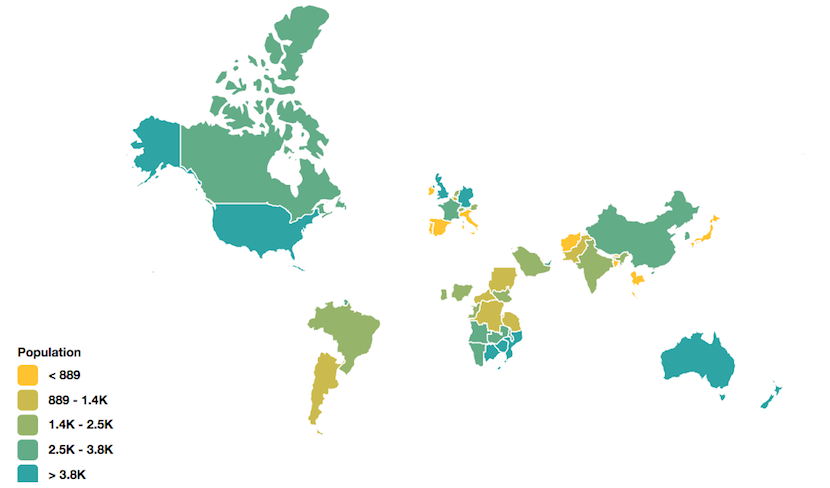 South Africa had symptoms in the 90s, very much like those that sailed across oceans searching for the American dream. The South Africa dream opened up post apartheid to previously disadvantaged South Africans, and those in neighbouring countries, but it seems those very doors are being shut under President Jacob Zuma’s rule. Local factors are dire, with one in four work seekers unemployed, while economic growth is anaemic, struggling to pierce the 1 percent line. And the emigration stats, as analysed by economist John Maynard, paint a sorry tale. The biggest drain is to Mozambique and Zimbabwe, which shows it’s not only the rich and famous jetting off to countries like Australia, New Zealand or Canada that are leaving the South African dream behind. The article was first published on the South African Market Insights blog. – Stuart Lowman

We take a look at where people staying in South Africa are heading once they decide to emigrate, be it due to job opportunities or economic circumstances, adventure, fear of crime or where the country they are heading off to is their country of birth. It’s been long known that Australia, New Zealand and Canada are hotspots for South Africans that emigrate. The numbers below show where South Africans have been heading from 2006 (data relevant to end 2015).

So where are people heading when they leave South African shores

The map shows the main countries South Africans emigrate to once they decide to leave South Africa (2006-2015).

The numbers above are sure to surprise as it shows the largest number of emigrants from South Africa are heading to Mozambique and Zimbabwe. This is more than likely Mozambicans and Zimbabweans heading back to their country of birth. As the survey these results are derived from do not ask the nationality of those who emigrated but purely where they emigrated to.

Part of the reason for the large number of emigrants to other African countries might be related to instances of xenophobia in South Africa in recent years, in which foreigners were targeted and attacked as they are being blamed for stealing jobs away from South Africans. It must be extremely bad if they would rather head back to Zimbabwe than stay in South Africa.

While the map shows the main countries emigrants have been moving to in the last 10 years. The graphic below shows the number of emigrants per year from 2006. 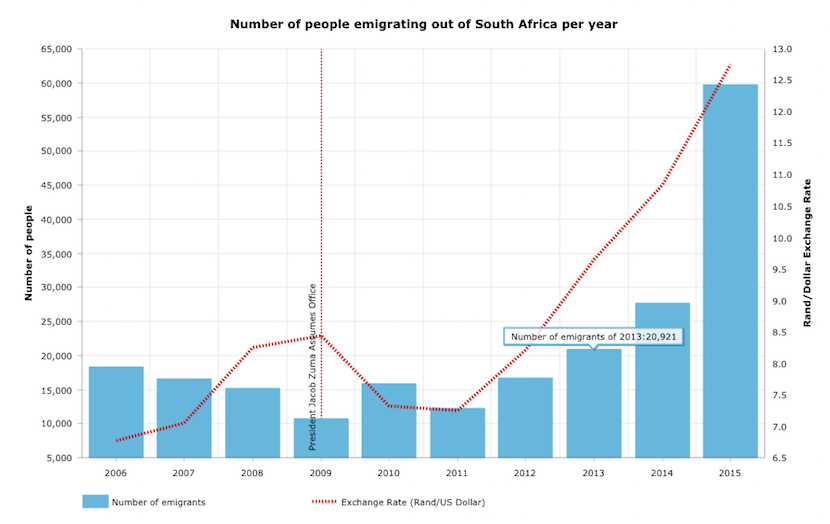 “Perhaps the variable that reflects the sentiments of a country the best, a country’s exchange rate is a marker for the world’s views on a country’s political, social and economic circumstances. A country with a stable political and social environment and a growing economy will have a strong exchange rate, as investors like stability and certainty. One thing the markets and investors hate is uncertainty. Any uncertainty in the political, social or economic environment will lead to investors shying away from a country, and this will lead to a weaker exchange rate as demand for such a country’s currency will fall. Economics 101, if supply remains the same and demand falls, the price will drop.

While the government will claim the exchange rate’s performance is due to a strong dollar, emerging market risk aversion, commodity price slump lowering demand for the South African currency, they cannot dispute the fact that since Jacob Zuma took over as president of South Africa, the currency has been slaughtered. And with political infighting, “invisible hands” and state capture, crony capitalism and general lack of good governance withing government, the world is sending the ruling party in South Africa a very clear message with the current level the exchange rate is sitting at. Pull your socks up or you in for a whole world of pain.”

It is clear that South Africa has not had its best run under President Jacob Zuma. With the president being hit by one scandal after the other he seems more intent on worrying about those than running the country.

Now the question is how bad must things be going in South Africa when masses of people decide to rather go back to Zimbabwe or Mozambique? The emigration numbers show that more and more people have given up on South Africa and are looking for better lives elsewhere. This is the legacy the current president of the ANC is going to leave South African’s with. A massive outflow of people and a exchange rate that’s seen its worse average yearly levels ever. A clear sign that the rest of the world has given up as much on South Africa, as those staying in the country that have decided to seek a better life elsewhere. Seems like there is no pot of gold at the end of this “Rainbow nation”. Well perhaps there is one if you a “Zupta”.