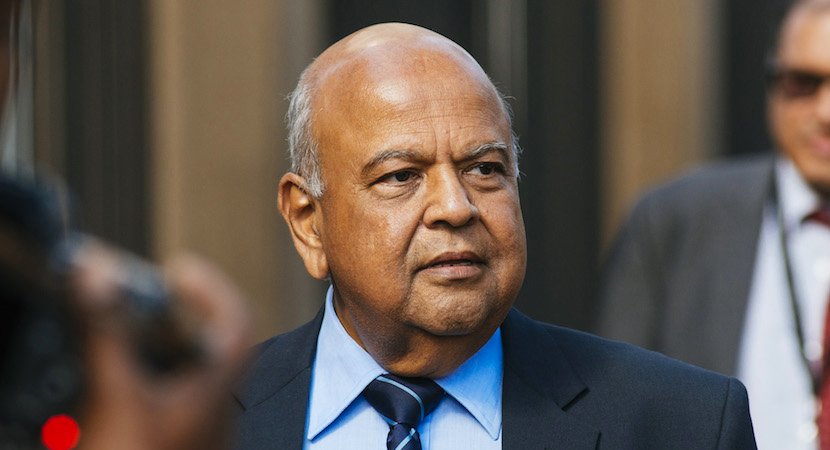 South African business leaders have finally dispensed with their questionable policy of appeasement. The CEO Initiative, which created a common purpose for SA’s most credible job creators, is at last starting to acquire some testicular fortitude. The group, led by Telkom chairman Jabu Mabuza, this morning issued the forthright statement below, warning SA President Jacob Zuma that firing Finance Minister Pravin Gordhan threatens to derail projects to create hundreds of thousands of jobs. The action will also hit SA’s poor the hardest. The CEO Initiative, born after the shock of Nenegate in December 2015, is the first time SA’s globally respected entrepreneurs like Brian Joffe (Bidvest), Adrian Gore (Discovery) and Stephen Koseff lent their considerable heft to any grouping of organised business. After last night’s shocker from Zuma – reminiscent of PW Botha’s Rubicon Speech in 1985 hence our dubbing of it as #Zumicon – they are turning ugly. Or at least as nasty as business leaders allow themselves to get in public. With this powerful sector joining spiritual leaders, the judiciary, students, the international community and millions of concerned SA citizens, you have to wonder how much longer the country will allow the lunatics to run the asylum. Whether Zuma has been forced into what business damns as “irrational” actions by having a Gupta gun to the head is no longer relevant. It is what happens next which will determine whether Africa’s youngest Constitutional Democracy will be able resist its toughest stress test yet. –  Alec Hogg

Business Leadership South Africa (BLSA) reiterates its strong belief that the manner and timing of the Cabinet changes announced by President Jacob Zuma are not in the economic interests of the country. We strongly condemn the action. It is irrational, ill-timed and completely disregards the national interest.

While we acknowledge that the makeup of the Cabinet is the President’s prerogative, last night’s decision and how it was taken has severely damaged investor confidence and will negatively impact private investment in the economy. For the past year, the National Treasury, labour and business, under the guidance of Pravin Gordhan, had forged a common purpose, which was beginning to yield positive results. This strategic partnership had helped South Africa avoid a credit downgrade, which would have threatened the viability of our country’s public expenditure programme, including one of the largest social welfare programmes outside the developed world.  All of this this is now once again in jeopardy. All South Africans, and especially the poor, will suffer as a consequence. The costs of South Africa’s bonds have already increased and the Rand has fallen sharply. The loss of investor confidence will constrict private investment, thus adding to the millions of jobs that have already been lost under his tenure.

The President and the African National Congress must act decisively to stem the economic fallout from this announcement. The President needs to explain why he removed some of the best performing ministers, while leaving in place those who have underperformed. Until a plausible explanation is provided there will continue to be speculation that these decisions were influenced by external parties with an agenda unrelated to the interests of South Africa and its citizens.

The CEO Initiative is gravely concerned and disappointed by the ill-timed and irrational dismissal of a trusted and well-respected Minister of Finance and Deputy Finance Minister. This decision, and the manner in which it was taken, is likely to cause severe damage to an economy that is in dire need of growth and jobs. The rationale for the removal of other ministers in key departments at a time when the country is beginning to make progress on a number of fronts is also questionable.

The speculation relating to the fate of the Minister of Finance that has reigned since the start of this week – and this morning’s announcement – have created unnecessary instability at one of our country’s key institutions and caused immense uncertainty among international investors. South Africa is an emerging economy in a global community, in need of capital from all corners of the world.

If investors lose faith and trust in our economy, all citizens – not just big business – pay the price for this, in the form of higher inflation, decreased buying power as well as decimated savings, pensions and investments. A lack of investment also means that growth – and much-needed job-creation – will be stifled.

More than a year ago – at the request of President Jacob Zuma, Deputy President Cyril Ramaphosa and the South African government as a whole – representatives from government, labour and business started working together with unprecedented urgency. Their goal was to achieve inclusive and sustainable growth, for the benefit of all who live in South Africa.

We maintain this is the most responsible and sustainable way of achieving true economic transformation. The dismissal of Pravin Gordhan as Minister of Finance and his deputy creates a high risk of derailing any progress that has been achieved in this regard and will deal a serious blow to the economy at a time when the country can ill afford this.

Commitment to fiscal discipline is of the utmost importance if we are to protect the economy from outside shocks and maintain an investment grade credit rating.

The role that the National Treasury plays in maintaining investor confidence in South Africa should not be underestimated. Pravin Gordhan and Mcebisi Jonas have always acted with the utmost integrity in their relations with business, while continuously challenging our approach to economic transformation and inclusive growth, in a manner that was entirely consistent with the Constitution and policies of the ruling party.

The combined efforts from government, labour and business have resulted in a vastly improved outlook for the economy compared to a year ago.

Firstly: the risk of a downgrade to sub-investment grade has significantly reduced. A healthy and stable credit rating forms the basis of creating an environment in which growth can thrive, as it attracts investors and ensures the country can borrow at an affordable rate.

Secondly: government, labour and business have made progress on various initiatives to support growth in the economy. This includes the establishment of a R1.5bn SME Fund to invest in small and medium-sized businesses; a Youth Unemployment Scheme aimed at providing employment opportunities to one million young people over a period of three years; as well as various investment initiatives underway in sectors such as agriculture, tourism, manufacturing and healthcare.

All three major rating agencies have acknowledged the combined efforts from government, labour and business in their year-end assessments in 2016, as South Africa maintained its investment grade sovereign ratings. However, the country still has to implement a significant number of reforms in order to create inclusive and sustainable growth that is necessary for true economic transformation.

The Treasury has shown great courage in taking difficult decisions to safeguard the credibility of the country’s finances, while paying heed to social challenges including the university funding crisis and welfare spending. Rating agencies and global investors have lauded South Africa’s efforts in this regard and the importance of continued rigour cannot be emphasised enough.

South Africa is well on its way to fulfilling its developmental mandate and creating a more equitable distribution of income by working towards the goals of the National Development Plan, but this has to be done in a disciplined and responsible manner – not by spending excessively on the short term with little regard for the future.

It is of the utmost importance to all South Africans that the integrity and capacity of the National Treasury be maintained.

We call on the new Minister, the government as a whole, and the ruling party to ensure that this great national institution is not further harmed by capricious executive decisions and that South Africa’s fiscal management remains as strong as ever in support of the South African competitive national advantage.

*The CEO Initiative is formed of leaders from various sectors, with the main work streams referred to in the media statement being led by Jabu Mabuza, Chairman of Telkom SA, Chairman of BLSA and President of BUSA; Sim Tshabalala, joint CEO of Standard Bank; Mike Brown, CEO of Nedbank; Mike Teke, President of the Chamber of Mines of South Africa; Nicky Newton-King, CEO of the JSE; Adrian Gore, CEO of Discovery; Brian Joffe, Founder of Bidvest; Dr Dan Matjila, CEO of the Public Investment Corporation; Colin Coleman, Managing Director for Goldman Sachs in South Africa and Stephen Koseff, CEO of Investec Group.

From the SA Chamber of Commerce and Industry (SACCI)

As the South African Chamber of Commerce and Industry (SACCI) we have received the news of the Cabinet Reshuffle with concern, especially at a time when speculation was rife about the pending changes in the National Treasury.

Although it is a presidential prerogative for the president to deploy his ministers accordingly, we as business strongly believe that some measure of prudence is exercised to avoid the subsequent knock-on effect such decisions are likely to have on the economy of our country. On the political front it is our call as business formation that there be cooperative partnership in managing sensitivities that may adversely impact our risk profile in international markets.

That being the case, we want to urge government together with business, representatives of labour and civil society to get back to the investment road show in an effort to calm the markets and to build investor confidence.

South Africa needs a stable and conducive climate for economic growth for us to be a preferred investment destination. These fundamentals must be supported by carefully thought through political decisions to the best interest of our beloved country, South Africa.