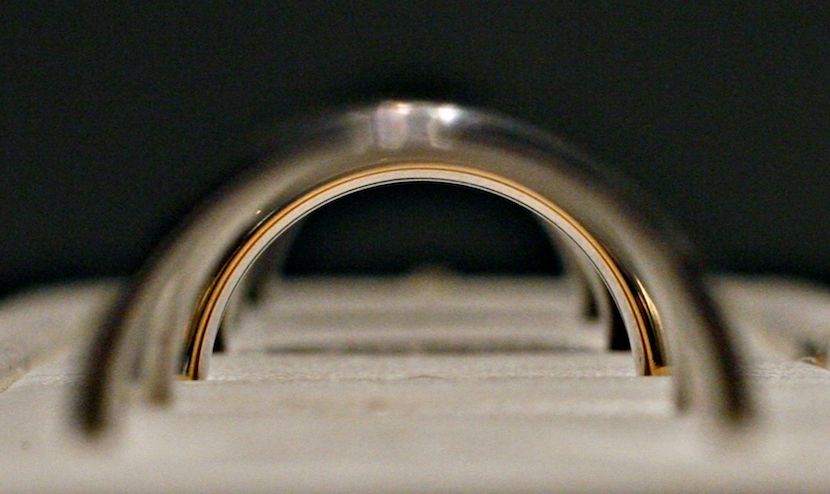 Palladium (traded by the symbol PALL) has risen to be the latest and brightest star for both precious metal and commodity traders. Over the last three years, it’s tripled its price to its all-time highest price, even exceeding gold prices at a seven year high. During the last three years, no commonly traded precious metal or commodity has had this kind of movement and trading potential in either a bullish (upward) or bearish (downward) direction. 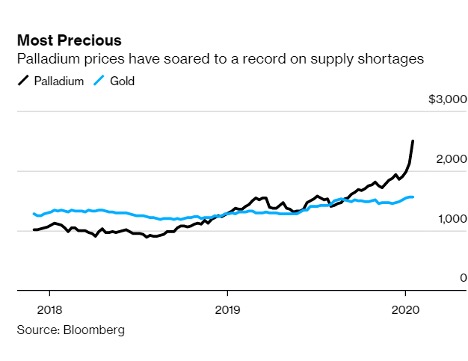 This lustrous white metal is a key component in catalytic converters for automobile exhausts and its supply hasn’t been able to keep up with demand. Approximately 85% of palladium is used in car exhausts but also palladium is used in smaller quantities in electronics, jewelry, collectable coins and dentistry.

One reason for a current palladium shortage is that palladium isn’t mined for directly but rather is sourced as a byproduct of mining for other metals like nickel and platinum which means suppliers cannot as quickly adjust to price changes. There are also not the central bank stockpiles of palladium as there is with gold and silver bullion. There is also much less individually owned palladium than gold, silver or even platinum in coins or jewelry or in the scrap market used by jewelers or pawn shops. Most secondary supplies of palladium (other than from mining other materials) comes from scrapped catalytic converters. Additionally, palladium isn’t as widely sourced from as many countries as gold or silver. 80% of palladium comes from South Africa and Russia (about 40% each) with a few other sources contributing the remaining 20%. There doesn’t seem any new players able or existing producers able to ramp up production to meet existing or future shortages in the supply chain. 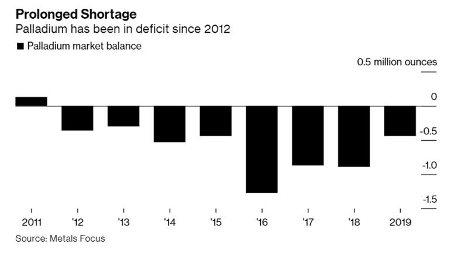 With palladium prices tripling in three years and movements of $600 an ounce in one month or even $200 in 48 hours, investors trading with 50 to 1 leverage have had the potential for astronomical returns on even the smallest investment.

Predictions cited in 2019 by major financial media sources had palladium passing gold for the $2,000 an ounce mark and they were correct. In 2020, some of the same sources are predicting palladium testing $3,000 an ounce. At that price, some believe car manufacturers might begin the costly process of switching over to platinum or rhodium to replace palladium in catalytic converters.

What kind of profits can one target in another major movement for palladium prices? Well, palladium has some similarities to gold trading and some distinct differences.

First, the similarities: gold and palladium both have 100 ounces per trading lot. So, if you were trading on either and the prices moved $10 an ounce you had the potential to make $1,000 on that movement . On a larger movement of $200 (which happened over two days in January of 2020) then you could have made $20,000 over two days on palladium trading per lot traded. This kind of movement isn’t common with gold in most months but with palladium $70 or $100 daily movements (or $7,000 or $10,000 per lot profit potentials) seem more and more common.

Since, gold is traded much more commonly than palladium, its spread (the difference between the buy and sell price which is what a trader pays to open the trade) is dramatically different with gold often hovering around 50 cents per ounce traded and palladium being closer to $5 an ounce. Considering the huge profit potential of palladium, most traders don’t seem the mind the premium price of $5 if it might make you $70 per ounce or more back in one day or $600 per ounce in one month.

Additionally, at CM Trading (as well as many other trading companies) gold and silver is traded without contracts with expiration dates. Less traded palladium, platinum and copper have dated contracts like other commodities (such as crude oil, coffee or sugar). Yet, palladium has 3 month trading contracts so a trader does not have the same concern of premature expirations that one month contracts of say trading crude oil.

It’s important to note a trader can arrange for contract rollover protection previously to a contract expiring by first talking with the Market Analyst assigned to their account.

With palladium trading not as common as gold or silver in the volume of traders or dollar volume of trading, less if often written about palladium so it can be easier to track market sentiment. Although recent dramatic movements have not only produced all-time highs in palladium prices but all-time financial media attention on this once barely known white metal.

Before trading on a commodity or an asset like palladium you are not familiar with it might serve a trader well to read a few articles from a few sources to get a feel of what is happening with it in the news. Then you can look at technical analysis indicators (“signals”) with or without the assistance of a Market Analyst and to help determine what direction, trade size and profit and risk targets you have in mind for a day trade or longer-term “swing” trade.

If you want to take advantage of this incredible opportunity to trade Palladium in 2020, sign up for an account with CM Trading and get in touch with your personal Market Analyst for more information on future price movements. Register now.