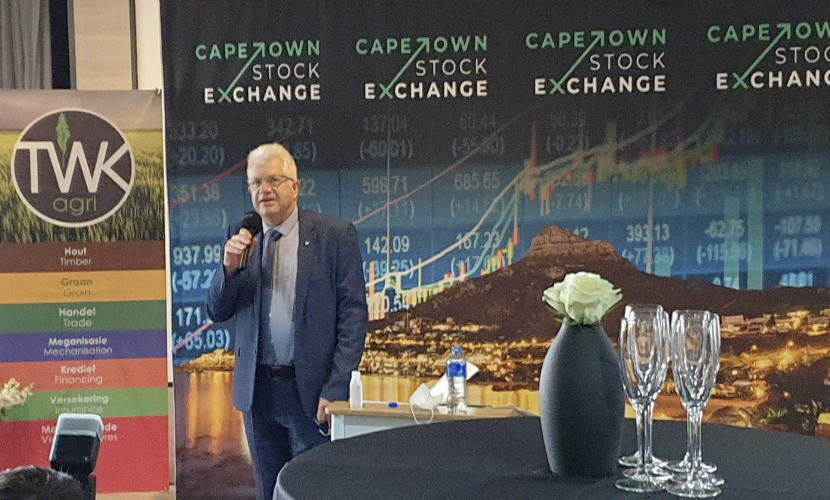 The Western Cape’s first stock exchange in over a century opened for business this morning when Eugene Booysen, CEO of the Cape Town Stock Exchange, rang the opening bell. The session also saw the debut of agricultural group TWK, the CTSE’s 8th listing. Listen to the clip below, where we get to share in the excitement of the inaugural session, hearing from Booysen and CTSE’s chairman JJ Njenje. – Alec Hogg

(Bloomberg) – The latest South African stock exchange opens Thursday pledging to lure firms from across the continent with listing costs that are a third of that charged by the Johannesburg Stock Exchange.

TWK Agri Pty. will be the first company to trade on the Cape Town Stock Exchange, which was previously called 4 Africa Exchange Pty. before an overhaul that resulted in the bourse becoming a full-fledged stock exchange, according to Chief Executive Officer Eugene Booysen. BKV Holdings will list a few weeks later.

While a wave of initial public offerings has swept across the world, firms in the continent’s most-industrialised nation, especially smaller companies, have been de-listing from South Africa’s main exchange in recent years due to cost and onerous compliance issues. Cape Town Stock Exchange and other rivals such as A2X and ZarX have been using technology to cut listing costs in a bid to lure business.

“We reduce the cost, risk, time and complexity for companies looking to list,” said Booysen. “This, and owning our technology, enables us to target small and medium firms of between R25m ($1.7m) to R2bn market capitalisation.”

Other than the JSE, the Cape Town Stock Exchange, will be the only bourse that is able to offer companies equity and debt trading, said Booysen. The exchange managed to get its debt listing rules approved last year, and is set to begin trading of debt in October, he said.

While private equity has managed to find growth companies, South African exchanges have not been able to bring them to market, said Booysen. South Africa has two fast-growing tech firms in branchless lender TymeBank, backed by billionaire Patrice Motsepe, and payments company Yoco, but both have raised funding from outside the equity-capital markets. TymeBank raised $109m in February, at a valuation of 8 billion rand. Yoco attracted $83m in July.

The Cape Town Stock Exchange is also in talks with other African bourses to share its technology offering and work on a revenue share basis, said Booysen. The exchange, where companies with a total market value of R7bn traded under its previous avatar, estimates shares valued at R50bn will trade on the bourse by mid 2023.

The Cape Town Stock Exchange would like to become the Nasdaq of Africa, able to attract companies looking to raise capital in Kenya, Nigeria, Ghana and others, said Booysen.