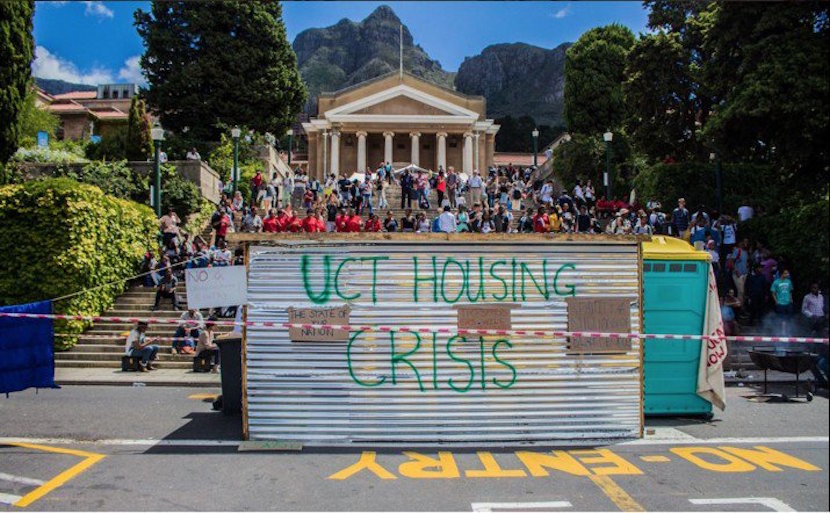 Exiled Venezuelan intellectual Moises Naim makes telling points in his brilliant treatise The End of Power – selected by Facebook founder Mark Zuckerberg to kick off his 2015 “year of books”. Among Naim’s arguments is how technology and social media is transforming old power equations, delivering enormous clout to splinter groups that have the potential to grow into mass movements. In South Africa, this trend is gaining momentum precisely where Naim would expect it to – at the leading “protest” universities UCT and Wits, which enjoy a history of activism. Those caught in outdated paradigms of where power actually lies, risk misinterpreting protests like #Rhodesmustfall and now UCT students’ fight for affordable accommodation. Applying might is very rarely right. And certainly not when your arsenal is stocked with antiquated weaponry. – Alec Hogg

Cape Town – A number of University of Cape Town (UCT) students are facing criminal charges and a suspension from the institution, UCT management said.

“We are in the process of obtaining an interdict and will bring criminal charges against those involved. We have taken the step to suspend eight students. We are bringing the situation under control with the help of the Public Order Policing unit and other police services,” UCT vice chancellor Max Price said.

Price said since student protest escalated violently on Tuesday evening, the university increased security presence on campus dramatically. “The Public Order Policing unit of the South African Police Service have come onto campus and are supporting UCT security to bring the situation under control.”

Price said student protesters under the #RhodesMustFall banner reacted violently to the institutions request to move their protest shack. He said students invaded residencies and kitchens, burning barricades and stole portraits from residences.

“We are determined not to allow a small group of violent protesters prevent 27 000 students and 4 500 staff from exercising their right to study and work in a safe environment… We have also unfortunately seen an escalation over the last hours in acts of criminality and vandalism by RMF protesters. Several fires have been started on the campus, which have been extinguished by Campus Security Services.”

Price said a car and a bus were set alight and destroyed. He said a bus has been stolen from the institution.

“It is utterly regrettable that a movement that began with such promise and purport to be fighting for social justice matters has now deteriorated into a group that engages in criminality and has only one agenda, namely to close UCT operations down. Their behaviour is utterly unacceptable and can in no way be tolerated.”

Price said the university would continue operations on Wednesday. #RhodesMustFall supporters are protesting against the university’s lack of residence accommodation for students from poorer backgrounds. – News24

Cape Town – A small group of individuals created a bonfire out of paintings they took from the Fuller and Smuts residences at the University of Cape Town’s upper campus on Tuesday night.

First-year student Logan Geldenhuys was on his way to visit a friend at Fuller residence when he saw a small fire on the campus.

The fire was next to a shack that had been erected in Residence Road by #RhodesMustFall supporters who were protesting against the university’s lack of residence accommodation for students from poorer backgrounds.

The fire was ignited around 19.00 on Tuesday, Geldenhuys said. In less than an hour, four police vehicles and a fire truck were on site and had doused the fire.

Police moved the protesters to the steps along Residence Road. It was not immediately clear whether those involved in the vandalism were all students.

UCT spokesperson Gerda Kruger said a university representative had urged the protesters to move their shack out of Residence Road, due to the traffic backlog it was causing.

“Our intention was never to stop the protest,” Kruger said.

“They refused, and while we were still deliberating on what to do, a group entered the two residences on our upper campus, removed artwork from the walls, and set it alight in a fire.”

According to a video posted on Twitter, a number of people were arrested at the scene of the fire after police used stun grenades to disperse the crowd. A police vehicle flattened the shack.

Police spokesperson Lieutenant Colonel Andrè Traut denied there had been any arrests, but confirmed that police were called onto campus. Although he would not confirm whether stun grenades were thrown, he said police took “appropriate action”.

Kruger said the institution would identify and discipline the students. This could include suspension or expulsion. If they were not students, the university would lay criminal charges.

The university was not against students protesting, but Kruger warned that they would have to face the consequences of their actions. – News24