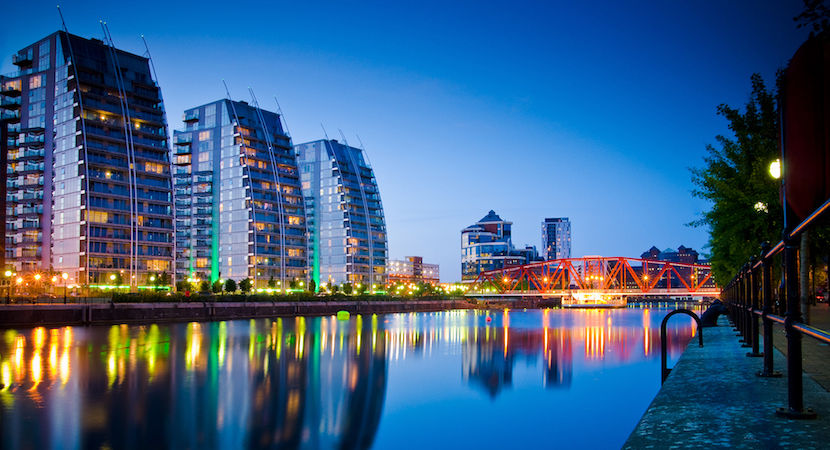 Where can South Africans invest their money for good levels of capital growth?

Ramaphosa received criticism when he hit back at a Donald Trump tweet regarding farm murders in September. In claiming that there are no killings of farmers or white farmers in South Africa, his comments have caused an uproar amongst many South Africans who feel he has played down the problem. In the past year between the 1st April 2017 – 31st March 2018 there have been 62 farm murders, and Ramaphosa’s comments and lack of acknowledgment of this must be difficult for the families and friends of the murdered farmers to process. Indeed, it implies their lives were inconsequential.

Globally, although many countries have promised investment in South Africa, the US’s $200 billion worth of tariffs on China may make it challenging for them to meet their commitments. These trade wars will have ramifications for developing countries, as there has been a sell-off of emerging market bonds as investors lose confidence. This is a major set back as Ramaphosa had previously secured pledges from China to invest in developing further business relations with South Africa.

There does seem to be some levels of hope in South Africa though. Paul O’Sullivan and Lord Peter Hain are investigating false allegations against senior Hawks officials that lead to the dismissal of KZN chief Johan Booysen and resignation of other senior staff who were replaced by Gupta sympathisers. Bringing about justice to those who have been incorrectly accused and trying to expunge corruption from South Africa’s political framework seems to be at the forefront of Ramaphosa’s agenda, which in the long term should lead to more stability.

Whilst things are still uncertain though with the investment from China and the future of farming in South Africa, it might be time to consider investing your cash somewhere else where there are prospects for capital growth.

Manchester regularly tops the charts for the best places to invest in the United Kingdom, and when you look at its fundamentals, it is not hard to see why. A quarter of Manchester’s population are in their twenties, the prime market for rental property and subsequent capital uplift in property prices once they have reached a point in their career where they can buy. Its strong employment market also adds to its appeal as people follow jobs. Around 80 of the FTSE100 companies have some sort of presence in Manchester, and with wages around 30% lower and living costs around 70% less, it is unsurprising why young professionals may pick somewhere like Manchester over London. 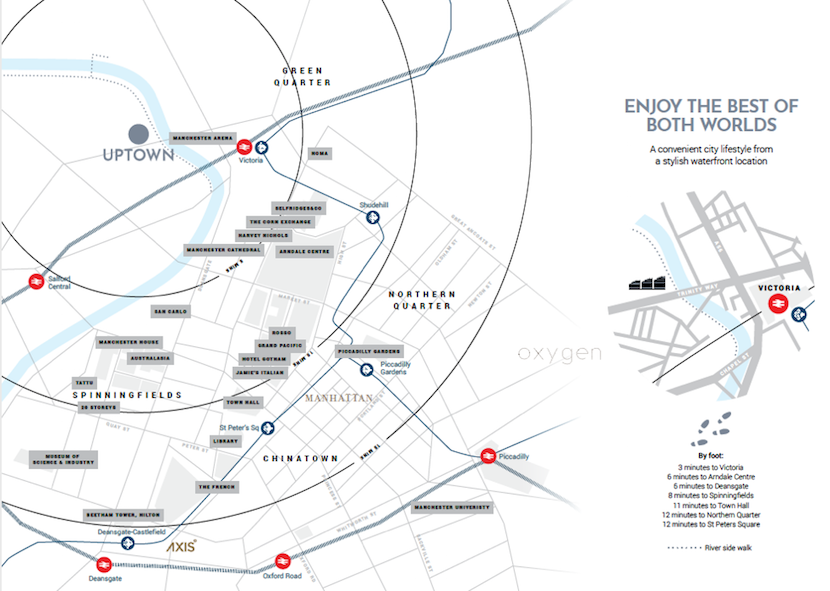 Large real estate investment firms have already recognised the appeal of Manchester. In 2016 LaSalle agreed to acquire 497 build to rent apartments from Renaker Build, the region’s leading residential developer. Legal and General have also taken an interest in Manchester, nearing a deal with Renaker to purchase a 44-storey tower block. The fact that these large real estate investment firms have such confidence in the buy to let market in Manchester must inspire confidence in the individual investor.

Residential price growth is predicted to be strong, with property specialist JLL predicting a 4.2% rise in prices, compared to a 2.4% rise elsewhere. Rents are also meant to increase above the national average at around 3.5%, allowing for strong capital uplift and rental yields.

Is it time to consider cities outside of Manchester?

Manchester has long been an investors favourite, and other cities such as Birmingham were left in its wake. Keen to shed its industrial reputation, the 2022 Commonwealth games coming to Birmingham and the construction of HS2, that could be about to change. HS2 will slash journey times to London to under one hour which will make it even more convenient for commuters and those who wish to do business in both Birmingham and London. With average house prices in Birmingham sitting at £191,331 compared to £627,818 in London, it is easy to see which city would be preferable for people once the transport links have been improved.

In fact, many companies are starting to look towards Birmingham. Large corporations such as Deutsche Bank, HSBC and PwC have relocated their headquarters to Birmingham and an improving standard of living has increased the city’s appeal to young professionals. The booming jobs market will only attract more young professionals to the city, who will also need a place to call home.

LendInvest included Birmingham on its top 10 buy-to-let postcodes in its Buy to Let Index Report, placing it one spot above Manchester. Perhaps now it is a city that should be at the forefront of investors’ minds.

LaSalle have already recognised the appeal of Birmingham and have confirmed a £100million build-to-rent purchase of 603 build-to-rent apartments in Nikal’s Exchange Square scheme towards the east side of Birmingham’s central business district. Perhaps it is the scope for rental increase that had tempted them, as according to Rightmove asking rents for a 2-bedroom flat in Birmingham average £860 PCM in Q1 2018, up from £750 in Q1 2015.It could also be residential property price growth, as they have increased by 45% in value since 2009.

One area of Birmingham that was particularly popular with investors is the Jewellery Quarter. At its peak in the 1900s it employed over 30,000 people, but as the industry slowed down, many businesses closed. The warehouses have since been converted into houses or workplaces for creative businesses, giving it an exciting vibe. The area has the added appeal of being close to the Bull Ring shopping centre and the city centre, so it is convenient for those who need to commute to work. 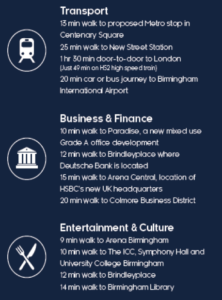 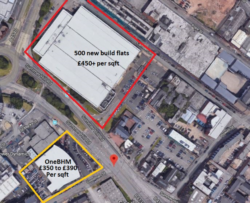 Developers such as Galliard Homes have snapped up the adjacent area, which is less densely population and therefore has more potential for house building. It is also alongside one of the main roads in Birmingham, meaning it will be easy to travel in and around Birmingham.

Paradise is one of the most important development projects to come to Birmingham in a generation. It will combine culture with commerce and offer an exciting mix of public squares, a 4-star hotel, 120,000 square ft of retail and leisure space and office space. It will truly bring something different to Birmingham and provide residents with a new place to work or relax with a coffee or a glass of wine in the evenings.

One BHM – An Exciting Opportunity for Investors

One BHM is a collection of 165 one, two- and three-bedroom apartments based in Birmingham’s city centre. The location is ideal for young professionals wanting a convenient commute to work. It is also close to several attractions such as Brindley Place (a popular eating and drinking destination), The Barclaycard Arena and the National Sealife Centre. A plethora of shops, restaurants and bars are also nearby. One-bedroom apartments start from £164,995 but there will be a 24-month payment plan available, making it more accessible for investors, and as opposed to Galliard Homes, investments are offered at a discount. 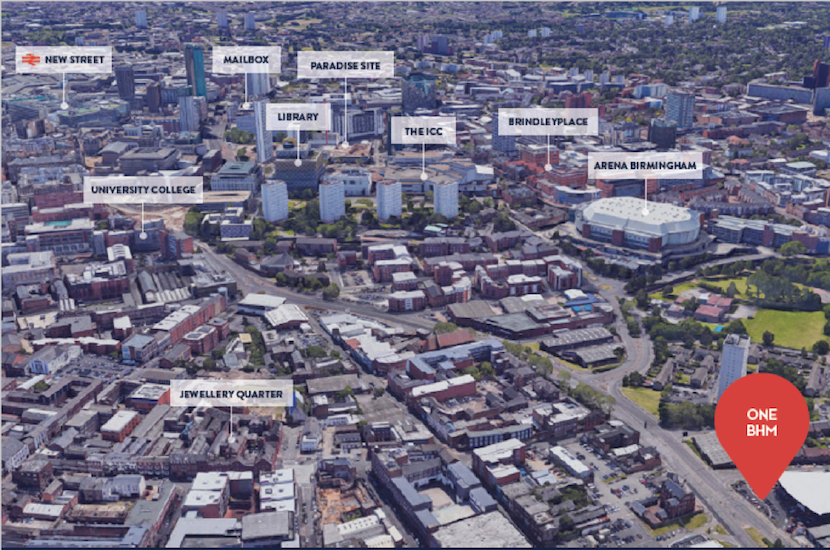 Although some may think that Birmingham lacks the culture of a city such as Manchester, from an investment perspective it needs to be considered. Investment fundamentals in Birmingham are strong, with good forecasts for rental and capital growth. Development projects such as Paradise will add a new dimension to Birmingham and make it a more exciting place for its residents, and One BHM is an ideal option for investors who wish to take advantage of Birmingham’s growing appeal.

With the ongoing political issues in South Africa, and the possibility of foreign investment looking ever less likely, surely it is now time for South Africans to consider investing elsewhere?

One Touch Property are in South Africa and running a seminar on Thursday 11th Oct 2018 – Hottest UK property sectors and their guest speaker Terence Corrigan will be discussing land expropriation and potential economy scenarios. Only five spaces remain. One-to-one meetings can also be arranged if you miss out.