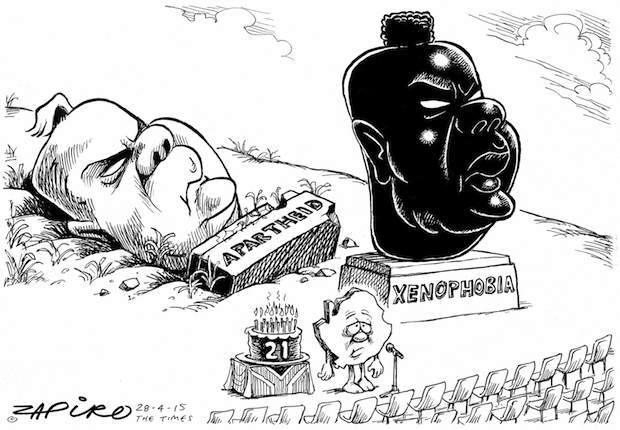 Overachieving South African expats are scattered all around the world. Those in business (Elon Musk) or global institutions (Phumzile Mlambo-Ngcuka) are well known, the country’s brightest exports to the academia are rarely acknowledged. Oxford University Professor Ian Goldin is one of them. One of the regular attendees in the rarified atmosphere of the annual World Economic Forum in Davos, Goldin’s intellect is celebrated around the world. In this article specially written for the launch of the African edition of theconversation.com, he tackles one of his homeland’s thorniest challenges. – Alec Hogg

By Ian Goldin, University of Oxford

Foundation essay: This article is part of a series marking the launch of The Conversation in Africa. Our foundation essays are longer than usual and take a wider look at key issues affecting society.

In almost every country across the globe anti-immigrant sentiment is high. Already this year it is estimated that more than 1750 migrants have died crossing the Mediterranean. Last weekend, ten people died and an estimated 5800 migrants were rescued off the Libyan coast. Yet Europe’s callous attitude to immigrants trying to cross the Mediterranean from North Africa is not only unethical but also ill-informed and counterproductive.

It’s a hostility echoed 7000 kilometres away in South Africa, where deadly attacks on immigrants have been contained by the military.

Yet, without immigration from Africa, none of us would be here. Experts now believe that migration across Africa between 60,000 and 70,000 years ago saved homo sapiens from climate-induced extinction.

The migration of these early Africans into the Middle East, then across the Mediterranean into Europe and Asia – and eventually into the Americas and Australia and the Pacific Islands – is the origin of today’s humanity. It will be our attitudes to the continuing movement of people that will define our national and collective futures.

Opposition to migration – and why it’s wrong

It is not difficult to understand why people blame foreigners for their troubles. High unemployment, rising inequality and increasingly unaffordable homes are among the legitimate concerns of citizens everywhere.

A key part of the explanation for these troubles is the rising impact of foreign influences on all our societies. Globalisation has been a positive force for human progress. It has raised average living standards, improved health, and led to political change – not least across Africa. But it also is the source of cascading financial crises, rising inequality, pandemics, climate change, the wrecking of ocean systems, increasing antibiotic resistance and diabetes and other health challenges.

People around the world are kicking back against this rising uncertainty by supporting extremist parties who wish to bring back protectionism and reverse globalisation. But blaming foreigners for our problems is a mistake.

Migration should not be a scapegoat

In the first place, average migration rates remain fairly low. Since the fall of the Berlin Wall 25 years ago the barriers to the movement of ideas, finance, trade and services have gone down, but the barriers to the movement of people have gone up. As a result, the share of migrants in the world has remained roughly constant at 3% throughout the current era of globalisation.

Migrants are seldom the source of our societal ills. On the contrary, immigrants are a key contributor to the dynamism and growth in our societies.

Immigration is desirable for at least four reasons:

Anti-migrant sentiment continues to rear its head across the world, including recently in South Africa.
EPA/Nic Bothma

The cost of migration

There are short-run, local costs to higher rates of migration that must be addressed if societies are to enjoy the much larger long-term benefits. These include the pressure on local housing and schooling arising from migration and the challenge to cultural homogeneity that migrants often pose.

Migrants can also take locals’ jobs, but the evidence suggests that because they also bolster growth and consumer demand, they tend not to depress overall wage levels or reduce the overall levels of employment of local workers.

The challenges posed by migration must and can be addressed through an honest and open discussion of the issues, but not become an excuse for shutting the frontier to migrants. Ensuring that all migrants are legally recognised and part of society, with all the necessary rights and also responsibilities that this implies, is a vital part of this process.

Despite domestic opposition in recipient countries, the number of international migrants has doubled over the past 25 years, and will double again by 2030. This is due to a combination of new countries and borders being created (34 have been created since 1990), population growth and migration pressures. Rapid economic and political change and, increasingly, environmental change threatens people and encourages the bravest to seek opportunity and security in new homes.

If this migratory process is allowed to take its course, it will stimulate global growth and serve to reduce poverty. However, it requires careful management to ensure that the benefits are harvested and the backlash of recipient societies does not lead to further polarisation.

The economic case for greater migration

While the incremental reduction of barriers to cross-border flows of capital, goods and services has been a major achievement of recent decades, international migration has never been more strictly controlled. Classical economists such as John Stuart Mill saw this as both economically illogical and ethically unacceptable. Adam Smith objected to anything that obstructed:

… the free circulation of labour from one employment to another.

By the 19th century, the development of steam and other transport meant that one-third of the population of Scandinavia, Ireland, and parts of Italy emigrated. Mass migration gave millions of Europeans an escape route from poverty and persecution, and fed the dynamism and development of countries like the US, the United Kingdom, and various colonies.

The rise of nationalism prior to the outbreak of the first world war led to the widespread introduction of passports and ushered in stricter controls on the international movement of people. One hundred years later, despite falling barriers to trade, finance and information, more than 100 countries have been created and the walls to free mobility have never been higher.

Approximately 230 million people now live in countries in which they were not born. These are the orphans of the international system.

For the countries they leave, migrants do often represent a brain drain. Even so, they contribute significantly to their home countries. Taiwan and Israel are testimony to the role played by migrants abroad, with their diasporas providing crucial political support, investment flows, and technology transfer which has ensured the survival of these countries.

However, migration has historically been the most effective measure against poverty. Remittances sent home by migrants exceeded US$580 billion in 2014. More than $430 billion of these flows went to developing countries.

In Africa, remittances are vital sources of income for many countries. Lesotho, Liberia and the Gambia received about 20% of their GDP from remittances.

Although politically unrealistic, opening borders completely could produce gains as high as $39 trillion for the world economy over 25 years.

At certain times, such is the case in Lampedusa off the toe of Italy, or Slough in England, the geographical proximity to a gateway may account for a disproportionately high share of migrants.

Places which have unusually high shares of migrants due to accidents of geography and history should not be forced to pay the costs for society as a whole. It is society as a whole that benefits and much more needs to be done to support places and people under stress from high levels of immigration.

But there is no magic threshold beyond which migration is unacceptable. In the thriving Dubai and other cities in the United Arab Emirates, migrants are more than 90% of the population. Cities such as Toronto have more than 50% migrants and have been voted among the best to live in globally for many years. In the UK, London is the most dynamic and popular city – more than 30% are migrants.

Migrants make up more than 90% of the population of the United Arab Emirates, represented here by Dubai.
EPA/Ali Haider

Most of the migrants desperately crossing the Mediterranean are refugees. The dangers they face in the crossing reflect that, for many, their lives at home are so desperate that they are prepared to endure the terrible dangers associated with leaving.

The idea that clamping down on smugglers or destroying the smuggling boats would stop migrants fleeing is not borne out by the evidence. Other means will be found, perhaps even more dangerous.

The most ethically perverse of all the suggestions is that if the migrants are left to drown it will somehow reduce the desire of migrants to attempt the crossing.

The tragically cynical arguments made by British and other officials justified ignoring frantic requests to support Italy’s stretched lifesaving efforts and led to a dramatic rise in unnecessary deaths. But it did not stop the flows of migrants. On the contrary, it led to the predictable rise in deaths at sea.

Citizens are understandably concerned about the failure of our politicians to show effective leadership on migration. The resulting failures are a cause of daily death. But not only are migrants suffering terribly.

So too are our economies and societies who would benefit enormously from more but also more effective management of migration. The public debate is too urgent and it is too important to be left to politicians. We urgently need fresh thinking followed by bold action.

* Ian Goldin is Professor of Globalisation and Development; Director of the Oxford Martin School at University of Oxford. This article was originally published on The Conversation. Read the original article.