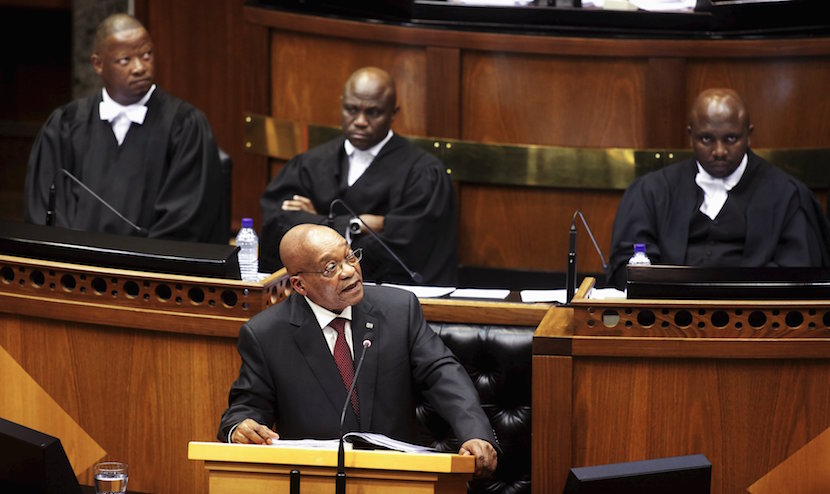 Aubrey Matshiqi hit the nail on the head in his pre-State of the Nation comments –  expect it to be full of little detail. And President Jacob Zuma delivered a relatively benign, well-scripted SONA, which as political analyst Daniel Silke says, was full of a series of broad brush-strokes. And given the lacklustre growth, the imminent threat of a credit downgrade and the issue of racism, there was a need for action points and not than what can be quantified as ‘waffle’. Silke says Zuma merely passed the buck on to Finance Minister Pravin Gordhan when he delivers the budget speech on the 24th of February. “This was a President who just seemed to be saying what was needed – although still largely impotent to provide the necessary leadership to implement.” And the problem with inept leadership is, is that it’s usually followed by inept disciples. All hopes pinned on Gordhan. – Stuart Lowman

Jacob Zuma’s much anticipated State of the Nation address was his most sombre to date. This was serious stuff – befitting the perilous state of the domestic economy. And, it was the economy that dominated his speech for more than 40 minutes.

Clearly, the penny has now dropped within the higher echelons of government of the severe effects of possible ratings’ agency downgrade will have on the country. And this was apparent from the get-go in the President’s remarks.

Touching on these very concerns, he rattled off a series of broad brush-stroke concerns seemingly a direct consequence of their heightened interaction with business leaders over the past few weeks.

In particular, a reference to the need to provide stable industrial relations clearly sounded written by business interests. Similarly, a mention of the need to combat ‘regulatory blockages’ can be broadly applied in correcting damaging legislative and policy initiatives that retard both foreign and domestic investment.

Not content to stop there, the President outlined the need for an overhaul of State Owned Enterprises (SOE’s) and spoke of austerity in the bureaucracy and a cut in wasteful expenditure. All of this clearly directed at both the Moody’s and S&P of this world – and domestic business interests.

But with it all came little – if any – detail. It was as if there was just no flesh on the bone – and that’s the real problem with the speech. It’s one thing to identify the problems but another altogether to provide some innovative and politically bold policy alternatives to rectify issues.

Read also: Montalto: Here’s why Zuma’s 2016 SONA will be more important than Budget

Having said that, President Zuma did repeatedly make reference to Pravin Gordhan’s Budget on 24 February. It was almost as though the President had deferred the real meat to his Finance Minister. Perhaps this SONA should’ve been renamed ‘Prelude to a Budget’ as that now will be the speech to watch.

In his SONA, Zuma has set up the Budget to perhaps be the defining financial moment for South Africa as it attempts an almost-too-late turnaround strategy to avoid the perils of rising borrowing costs, further currency instability and resultant inflation.

But the one area where the President did provide some substance to his message was on the issue of austerity. Yes, cutting the fat out of parties and excesses by government departments was always expected, but he resurrected the old debate about a possible end to Cape Town as the parliamentary capital of the country.

This cost-cutter (and politically sensitive move) was also joined by another important shift on spending. In a reference to the use of nuclear energy, the President emphasised that government would ‘only procure nuclear on a scale and pace that our country can afford’. Again, this type of reassurance seemed directly linked to the views of Pravin Gordhan indicating that the prudence apparent in the Nene years had found continuity – and importantly influence – as a result of Gordhan’s appointment.

Finally, the best line of the entire SONA was the final one – possibly largely unnoticed by most.

After a tense day in Cape Town and a tedious hour-long disruption largely from the EFF, President Zuma made a final rallying call: “We cannot change the global economic conditions, but we can do a lot to change the local conditions”. It was a masterful sentence that simply didn’t remotely sound like his own writing.

Sure, there are speechwriters, but these sentiments buried at the end of the long discourse were possibly Zuma’s truest words to date and again reflected an understanding of what the country itself can do rather than to constantly blame others.

No-one would expect the President in this showpiece event to own up to the personal disaster that is Nkandla or his personal role in the financial disaster that was (and still is) the replacement of Nhlanhla Nene. This was a President who just seemed to be saying what was needed – although still largely impotent to provide the necessary leadership to implement.

Still, SONA 2016 sets it all up for Gordhan – and now shows just how powerful he may be. It’s almost as though this SONA reflected a removal of power from Jacob Zuma – as Treasury and the Finance Ministry took charge. But let’s wait – and hope – for February 24.