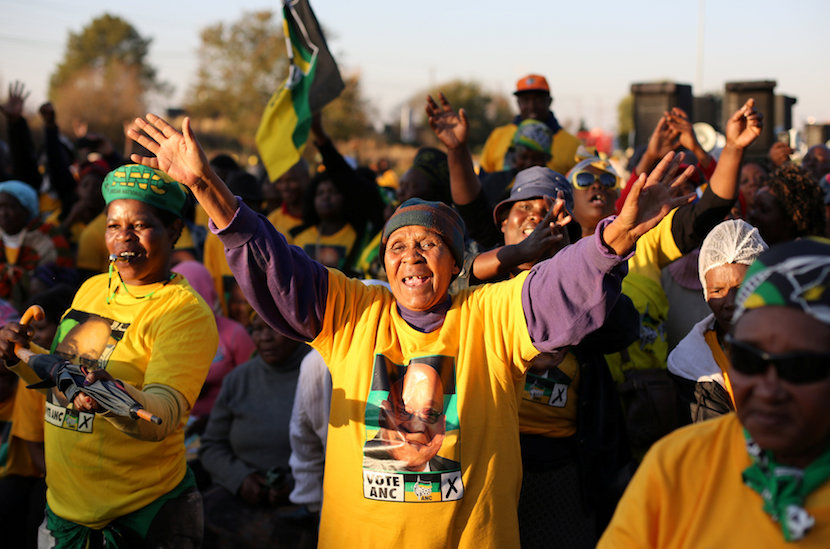 As the outcome of last week’s local government election shows, South Africans in large numbers have turned their backs on the ANC. This means they are no longer the ‘prisoners of history’, as incoming City Press editor Mondli Makhanya has written. However, they still remain the prisoners of the ANC’s national democratic revolution (NDR), which the SACP openly identifies as offering the “most direct” path to a socialist and communist future.

The NDR will continue unabated unless the reformists in the ANC succeed in reversing the current thrust of policy – or unless the millions of voters who currently stay away from the polls are persuaded to vote for the DA instead. (A vote for the EFF will not help as Julius Malema’s organisation is even more strongly committed to the NDR than its ANC parent.)

The ANC has long claimed that black South Africans are duty bound to vote for it because of its role in history – and, in particular, because it was solely responsible for liberating the country through its “struggle” against the National Party government.

This claim is grossly misleading in three ways. First, it airbrushes out of history all the other political organisations that helped bring apartheid to an end. These range from the Inkatha Freedom Party (IFP) and the Black Consciousness (BC) movement to the Progressive Federal Party of Helen Suzman, the Federation of South African Trade Unions (Fosatu), and the country’s liberal newspapers, universities, and think tanks.

Second, it airbrushes out the enormous role played by ordinary South Africans. In the 1970s and 1980s, their ‘silent revolution’ against racial laws was far more effective than all the ANC’s bloody sabotage attacks, for it was this sustained resistance that made key apartheid laws increasingly unenforceable. In time, this left the NP government with little choice but to repeal them.

Third, the claim airbrushes out the true nature of the ANC’s struggle. The ANC likes to pretend that this was essentially a civil rights initiative, backed by a campaign of limited violence against the apartheid security forces. However, in its last decade from 1984 to 1994, the ANC’s struggle in fact took the form of a ruthless people’s war.

The people’s war commonly relied on terror, including necklace executions, to force black civilians to take part in stayaways and boycotts. It also used pre-planned attacks and frequent assassinations to weaken and destroy its key black rivals in the BC movement and Inkatha – both of which had far more popular support than the exiled and often corrupt ANC.

From 1984 to 1994, the people’s war helped bring about some 20 500 deaths – not all of which, of course, were caused by the ANC. Of these, roughly 5 500 took place in the first five years. The remaining 15 000 – about three times as many – took place between 1990 and 1994. By then the door to a new non-racial democracy had already been thrown open, which meant there was little reason to keep targeting the National Party government. But the first all-race election was also drawing nearer and it was this – from the ANC’s perspective – that made it all the more imperative to weaken and destroy both its BC rivals and the IFP.

So successfully did the people’s war achieve this objective that, for the first two decades after 1994, the ANC faced no real political competition. This gave it what it had long wanted: the hegemony required to press on with the NDR.

Moreover, once Thabo Mbeki had been removed and a compromised and beholden Jacob Zuma installed as president, this paved the way for the ANC/SACP alliance to shift towards a ‘second’ and more ‘radical’ phase in the NDR.

The last four years have thus seen a slew of NDR policies and laws, which together have greatly weakened property rights and eroded a necessary business autonomy. Though the ANC/SACP has marketed these shifts as vital to ‘redress’, their real aim has been to empower the state, hobble the market economy, worsen unemployment, and make millions of black people ever more dependent on the government.

However, reformists within the ANC are becoming worried about the zero growth now forecast for 2016. They also have good reason to fear that the electorate will punish the ANC even more severely in the coming general election in 2019 than they did in the local government poll last week.

In last week’s election, many of the roughly 20 million people who failed to vote must have thought this was a good way to ‘punish’ the ANC for poor governance and rising joblessness. But if millions of them come to realise that a vote for the DA will be far more effective at showing their displeasure, the ANC could be out of power in less than three years.

On this scenario, the country could finally start living up to its great potential under a government that knows the value of investment, growth, and jobs in a modern, forward-looking economy. This is also, of course, what most South Africans want.

Will the reformists now be able to liberate the ANC from its obsession with a long outdated ideology, winkle out the SACP cadres that still largely control the ruling party, curtail the greed, corruption, and nepotism that NDR policies have fostered, and embark on major market-oriented reforms?

Whether or not the ruling party retains its power in 2019 now largely depends on how comprehensively the reformists in the ANC are able to prevail – or on how quickly South Africans come to realise that the power of their vote can also free them from the NDR.