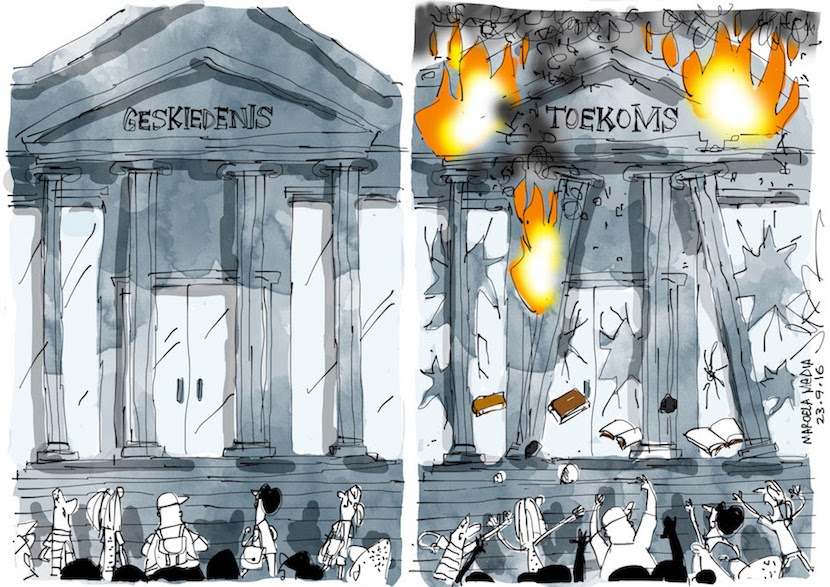 History is our most widely available resource. But it’s often neglected, and in some instances manipulated, but it’s very unusual that one cannot find another moment in time to help guide or understand situations. Leopold Scholtz is an independent contributor who writes a regular column for Die Burger newspaper. Scholtz penned the below contribution, winding back the clock to the development of the nuclear bomb. He asks why the Americans were able to develop the weapon of mass destruction, but the Germans were not. He puts if down to freedom of thought, which goes back to the development of the University of Bologna in 1088. He says the once ideology intrudes; freedom of thought goes out the window. The article was first written in Afrikaans, and regular contributor Ed Herbst translated it into English below for us. – Stuart Lowman

The current violence by groups of students on South African campuses brought to mind a recently-published review of a biography of the Dutch physicist Samuel Goldsmit. At the end of World War II and on behalf of the Allied Powers, Goldsmit led the search for the Nazis’ nuclear weapon programme in Germany.

In his unpublished memoire, Goldsmit asked himself why excellent German scientists like Otto Hahn, Max Born and Werner Heisenberg had been unable to develop any nuclear bombs while their peers far away in America succeeded in doing so. The answer lies in freedom of thought, he wrote, which is vital for pioneering science.

Such freedom of thought existed in America but not in Nazi Germany.

The current violence by students basically revolves around two issues: access and ideology. There must be free education, and it must be decolonised and Africanised.

What is a university? Right since the establishment of the University of Bologna (1088), the oldest European university, this type of institution had two defining characteristics.

The first is that it is an elitist institute. This term previously referred to the socio-economic upper layer of the population – university access was mainly limited to the aristocracy and rich citizens – but this changed during the course of the 20th century.

Elitist now – hopefully – means that anyone with the required intelligence and capacity for work has access. If one can take the government at its word (and this is not a given!), up to 75% of all students – presumably those from a poor background – will not be affected by the increase in class fees.

This means that the (in itself understandable) demand has been accommodated. But the second is problematic.

Science is science. The moment you attempt to force science into an ideological straitjacket, quality flies out the window. This is what happened to German nuclear scientists in Nazi Germany. This is what happened to Russian scientists in Joseph Stalin’s time in the Soviet Union. This is why (thinking of my own academic discipline, history) the work of historians who allowed themselves to be led by those ideologies, was generally of an inferior quality compared to what was produced in free countries.

Right from the establishment of the University of Bologna, such institutions were independent. Authorities from time to time attempted to exert pressure on them but seldom succeeded.

Universities have inevitably always been part of a community and, as such, were influenced by the culture and values of their communities.

This also happened to our South African universities in the 20th century. But Afrikaans historians were able do independent research, which often resulted in proper debates between professors like Floors van Jaarsveld, AN Pelser, Piet van der Merwe and Hermann Giliomee.

Read also: University fees fiasco: As life is lost, property destroyed, who is to blame?

To now demand, as the militant students do – and, believe it if you will, certain academics as well – that education and research may only occur within the parameters of a specific ideological angle, is to trample on the whole idea of the university, namely that of education and academics. As I have explained in my previous columns, the foundation for our current scientific approach was laid in the Middle Ages by the Arabs, a non-Western civilisation. Which makes the current students’ demand preposterous.

The same police shooting students are the same people who can't afford higher education for their kids.#FeesMustFall pic.twitter.com/bWSOzHLWND

But maybe the time has come for those who wish to study, to draw a line in the sand. Without becoming violent themselves, the instigators must be shown that they are a small minority.