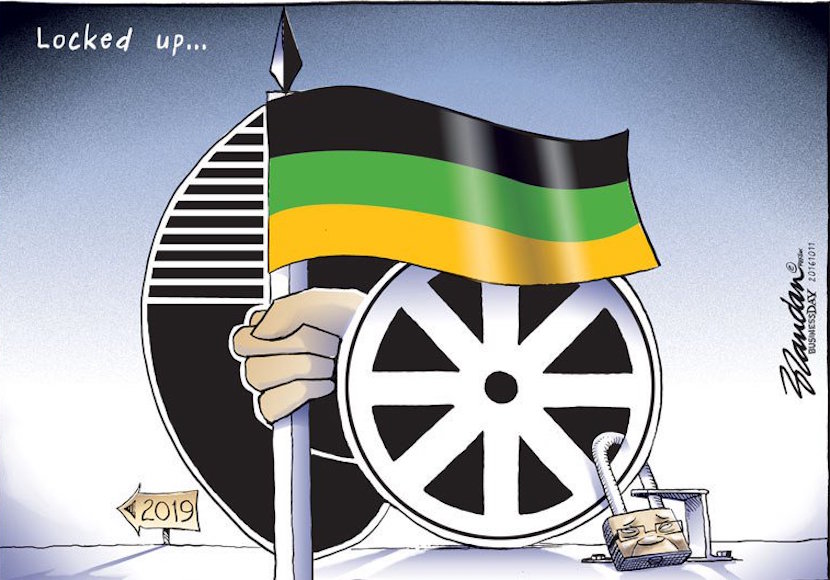 The gloves are off as Finance Minister Pravin Gordhan’s weekend revelation coincided with President Jacob Zuma’s trip to India. The battle between the two, is effectively turning out to a battle against the Gupta family, whom are at the centre of the controversy. Political analyst Daniel Silke says the battle lines are now much broader and have spread to an historic rift within not only Cabinet but potentially within the larger ANC. He says South Africa now faces a battle of self-interest vs national interest. It’s a battle that needs a resolution soon as the time on the clock is running out with December around the corner. It’s a lot easier to fall into junk, than it is to come out of it, and with South Africa’s economy on its last leg, this may be the straw that breaks the camels back. Great analysis. – Stuart Lowman

The current malaise – born out of leadership failure, creeping graft, rent-seeking and the implosion of cadre deployment – now has the country on the ropes. This complex interplay between politics and economic management now means that both aspects of governance are now in deep distress. And both will need substantial change in order to rescue the country from decline.

Clearly, the context in which a respected Minister of Finance finds his position threatened by apparent political pressure from a faction within his own party has reached boiling point.

Gordhan was always the reformer – understanding the need to protect our investment grade and in so doing, show the world that we can spend wisely and prevent state capture from becoming endemic. He was always brutally honest in alluding to those seeking to unseat him – and the fear was always there that he would be vulnerable as a result.

And so it came to pass that with putative fraud charges now hanging over him, he has fired back with a serious indictment against possible nefarious financial dealings by the Guptas – seen as the foundation of his political fragility. It’s a high-risk game of political tit-for-tat that has profound economic implications as well.

At the same time, Gordhan himself has lambasted the NPA for its attempts to charge him. In so doing, the Finance Minister has – in effect – questioned the efficacy, ethics and independence of a critical cog of the criminal justice system in the country.

It’s a remarkable critique of a decline in constitutionality when someone of that stature and gravitas within the governing party has little or no trust in the state’s ability to fairly adjudicate.

It is this decline in the moral authority of an institution like the NPA – which Gordhan attests to – that represents the tightrope that the country is walking. Hitherto praised as a bulwark against often being seen as a Banana Republic, the NPA now stands accused of a lack of independence open therefore to political abuse.

And, with the Office of the Public Protector – a key Chapter 9 institution – interdicted by none other than the country’s President over the potentially explosive State Capture report, the danger signs are all to apparent that South Africa might’ve lived through its most transparent years in terms of self-policing and that the era may indeed be drawing to a close.

While this fear now is the most real it has ever been since 1994, there is an important caveat that may well prevent a Constitutional Armageddon.

Clearly, the political shenanigans take place against the backdrop of a flat-lining economy, dangerous levels of unemployment that show no signs of abating, rising student unrest and an imminent report card from the Ratings Agencies reflecting on our investment grade levels.

It's a tragedy that so many have conspired to protect the narrow interest of a few self-serving political elite! https://t.co/Hz7qrKtfZy

South Africa today is simply too weak economically to allow the nefarious political power clique within the State the chance to really exert the political control they crave. President Zuma is no Raycep Erdogan of Turkey. With a relatively strong economy (albeit weaker than it was), Erdogan can extend his political grip on all aspects of society. No such ability here for Zuma.

The deep nexus between poor political and economic performance now is symbiotic. Tamper with the Treasury’s independence and you potentially get a downgrade. Allow graft to persist, and you deny the poor the chance at economic opportunity. Replace a Finance Minister with a ‘yes man’ and you damage investor confidence and policy credibility. Spend too much on possible rent-seeking prestige projects like a R1tn nuclear power deal and you may plunge the country into a fiscal quagmire with untold and unintended consequences.

As a result, this realty has dawned on a host of senior ANC office bearers and even members of the executive that a choice has to be made. A choice between being in the pound seats for friends and family or taking some political risk for the future of all South Africans and the integrity – and constitution – of the State.

Zuma's isolation within the broader ANC is growing by the minute … https://t.co/qejXRMDfqL

Within this context, there is a new discourse that has emerged only in the last week. The support expressed for Pravin Gordhan from Cryil Ramaphosa, Aaron Motsoaledi, Derek Hanekom and Joe Phaala is the first real executive break with the Presidency they serve. Add to this the very telling remarks from ANC Chief Whip Jackson Mthembu and the external view from Trevor Manuel and you have a revolt more public than ever before.

The battle lines are therefore now much broader than just a Gordhan vs. those who wish to protect their benefits. It’s now spread to an historic rift within not only Cabinet but potentially within the larger ANC. For the first time, the link between the erosion of constitutional principles is linked to economic decline.

South Africa now faces a battle of self-interest vs national interest. Only once the factions within the ANC make a public stand – as they are currently doing – can this battle play itself out.

Whilst it is indeed better that this issue, which has long destabilised governance, is finally fleshed out. The question remains just how long this heightened degree of tension will persist. It is now unlikely that the lid can be kept on this political pressure cooker for another year until the ANC”s elective conference.

The continued implosion of ANC factors will simply erode our ratings and place barriers to investment from both domestic and foreign sources in our economy. The policy and performance paralysis in government that this causes – if sustained over the next year – can set us back years in our quest to deliver.

Now's the time for all good men & women in the ANC, if there are any still left, to stand up. Zuma has to go

Given the levels of public dissatisfaction now articulated from serving ANC Ministers – and not just stalwarts no longer in office – there is clearly an attempt to precipitate a showdown sooner than December 2017.

But just like a tough game of chess, the political stalemate looks set to persist until one side gains a critical edge. President Zuma – facing a greater internal revolt than ever before – and with not only the Guptas compromised but with a dangling State Capture report and corruption charges still very much on the table, is on the back foot. This story may not last out until next Christmas – it now looks as though the showdown is nearer than ever before.

It’s South Africa’s highest stake game yet – and one that could determine both economic and political progress for many years to come.