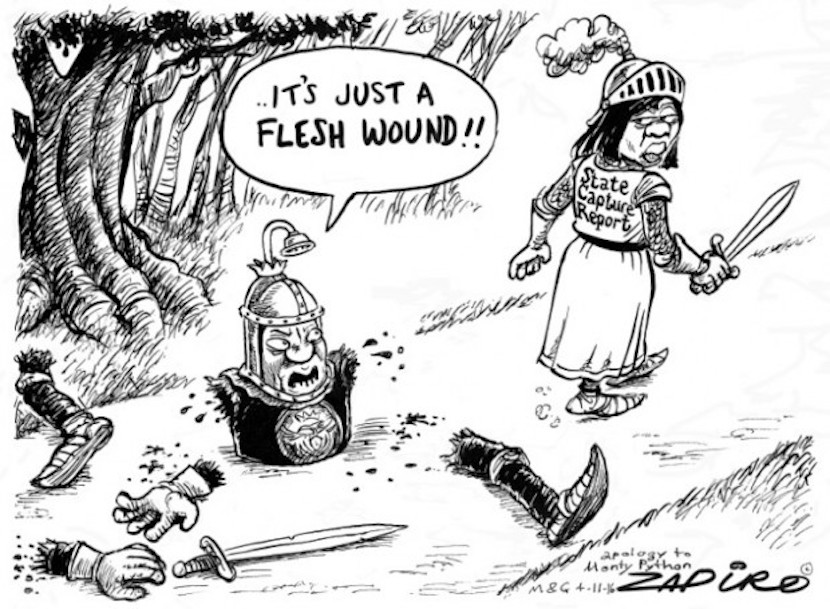 In life, one learns a lot more from what is not said, that what is. And if one applies this theory to former public protector Thuli Madonsela’s #StateCaptureReport, the real issues come to the fore, says Accountability Now’s Paul Hoffman. Madonsela said the matter is too big for her under-staffed, under-resourced office, and in a normal string of Chapter Nine institutions, the matter would be referred to an organisation like the Hawks. But the fact that she did not feel it would be an appropriate action to simply refer the matter to the police for investigation by the Hawks and prosecution by the NPA speaks volumes about the “State of Capture” that has already taken place. And given the bumble by NPA head Shaun Abrahams around the trumped up, then dropped Pravin Gordhan charges, she may be vindicated and the puppet strings may have long reach. Hoffman says a massive criminal investigation is needed but it may be long and complicated and instead reckons a deft move would be to concentrate on the tax affairs of the Zuptas a la Al Capone style. But again, one wonders if any institution, or individual is up to the task. A must read. – Stuart Lowman

A great deal has been, and no doubt will be, written about the last report of the outgoing Public Protector, Thuli Madonsela. With the catchy title “State of Capture” the report traverses complaints by the Jesuits and the Democratic Alliance that “state capture” is under way in SA and should be stopped.

Unusually, the report is a final report that has not been preceded by a preliminary report, as is the practice in the office of the public protector. The usual practice is a salutary one for complaints of maladministration because it affords those implicated in the alleged maladministration the opportunity of accountably explaining their actions and/or the decisions that are impugned by the complaint. This in turn affords the public protector the space to engage the parties involved in the complaint in a process designed to support and strengthen our constitutional democracy by coming up with a final report that is transparent, accountable and responsive to the public if the matter cannot be disposed of more efficiently by negotiation or mediation.

All of our Chapter Nine Institutions are intended to support and strengthen our new form of government. It is arguable that they form the “Integrity Branch” in the new constitutional dispensation, especially as the public protector has the power to take appropriate remedial action in a manner which is both binding and enforceable. Until Thuli Madonsela’s appointment the over-supply of cadres of the national democratic revolution deployed to high positions within the Chapter Nine Institutions rendered them less than effective in carrying out their mandates, this has worked to the detriment of governance with integrity and a clean administration in the new SA. Adherents to that revolution do not regard the values and principles of the Constitution as the highest law in the land. At best the Constitution is but a stepping stone on the road to hegemonic control of all levers of power in a society in which the party and state collapse into one and independent institutions like the media, the courts and the private sector in general, are consumed in the hegemony at which the revolutionary forces aim.

The notion of a preliminary report by a properly independent public protector in any complaint about corruption (which is, after all, what state capture entails on a grand scale) is not as workable as is the case with maladministration. Any instance of maladministration may be due to capacity constraints, lack of skill, inertia or incompetence; at worst, negligence is involved. Complaints concerning corruption are about deliberate criminal activities which those implicated will seek to hide, to deny and, when confronted, to dissemble about the case against them.

The failure of Brian Molefe of Eskom to tell anyone from the public protector down to the junior television reporters what he was doing at the Gupta compound in Saxonwold and what he was talking to Ajay Gupta about during no fewer than 44 cell phone conversations over a few critical months is an example of the kind of response one gets when putting allegations of malfeasance to those involved. Challenging the accuracy of the records of cell calls and deflecting questions with irrelevancies about an apparently non-existent shebeen in Saxonwold are not an answer to the question: “What were you and Ajay talking about so frequently?”

People are ungovernable. Now they say the #SaxonwoldShebeen is a "bring and bribe" setup. 😂😂😂

Recognising the fundamental difference between malfeasance of the kind that the corrupt embroil themselves in and misfeasance which those ignorant of their duties, inattentive to their functions and negligent in the manner in which they serve, the public protector decided to cut to the chase by calling for a commission of inquiry into what she had observed during the course of her investigations. The jury is still out as to whether she had the power to order up a commission of inquiry, but that is a discussion for another day.

The point is that the Chapter Nine Institutions are generally capable of cross-referring matters that come to them from the public. If, for example, the public protector gets a complaint about threatened or actual human rights infringements in an informal settlement that has been neglected by officialdom, she is able to refer the complaint to the Human Rights Commission for investigation. Similarly, if an issue of gender discrimination finds its way to the Human Rights Commission, it may send the file to the Gender Commission.

I don't think #StateCapture report is as damning of President Zuma as many would have liked. No smoking gun but more pattern of behaviour.

However, when a complaint that reveals a prima facie case of corruption arrives at the office of the public protector there is no other Chapter Nine Institution to which to refer it. In an ideal world, complaints of a criminal nature ought to be referred to the police, and if the complaint involves corruption in high places (as any complaint of state capture would inevitably do), to the Hawks, or Directorate of Priority Crime Investigation a supposedly independent and supposedly specialised unit within the police. The public protector has no powers to prevent and combat crime. These powers are constitutionally allocated to the police. The mandate of the public protector involves maladministration in the affairs of state and in the public administration. Her office has no jurisdiction over the private sector. As the state cannot capture itself, it is plain that the investigation of state capture by nefarious forces is essentially a corruption investigation that properly belongs to the Hawks.

The problem is that while the preparatory and investigative work was being done in respect of the “State of Capture” report, the Hawks were busy persecuting the Minister of Finance and others with trumped up charges now ignominiously withdrawn. The Hawks are generally comporting themselves as the dirty tricks department of a faction of the governing alliance that appears to be partial to the notion of state capture as a means of “transforming society”. The National Prosecuting Authority, since the demise of the Scorpions, does not investigate complaints; it awaits input on complaints from the police and, in theory, prosecutes those cases that have merit.

The former public protector in effect says the matter is too big for her under-staffed and under-resourced office to handle. It surely is, even if only half of what she has “observed” and recorded in the report is true. A massive criminal investigation is indicated and if the malfeasance observed has no reasonable explanation, then long and complicated criminal trials will follow with those accused of corrupt activities facing a mandatory minimum sentence of fifteen years if convicted.

After the #statecapture report, would you trust Brian Molefe & Eskom with the multi-billion dollar nuclear deals?

A deft move would be to concentrate on the tax affairs of the Zuptas a la Al Capone, an American gangster who was jailed for tax evasion. Whether the National Prosecuting Authority under its present leadership would be up to a task of such a daunting nature is questionable. They could not even get it right on the terms of Ivan Pillay’s early retirement; heaven help them on the byzantine intricacies of the Zupta wheeling and dealing.

The fact that Adv Madonsela did not feel that it would be an appropriate action to simply refer the matter to the police for investigation by the Hawks and prosecution by the NPA speaks volumes about the “State of Capture” that has already taken place.